Now that White Pine is looming up in all the vastness that distance and consequent vagueness give; when the East and the West are pouring into that new El Dorado their thousands of hopeful hearts that dream of fortune in a day; when secure investments and moderate but certain gains are disregarded in the mad pursuit of what at best must prove an ignis fatuus to all but a favored few; it may seem scarce worth the while to describe, either in general or in detail, the present condition and future prospects of what but lately, in public estimation, as it is yet in reality, is the chiefest of silver lodes, which founded a State and indirectly peopled a territory equal in extent to the domain of many a monarchy.

It may be, however, that no more appropriate time could be chosen; that a full and truthful exposition of the developments which have been, and are being made in those mines situated upon, or immediately contiguous to, the Comstock lode, by more thoroughly acquainting the public with the future value of this great vein, which for a decade has added a steady stream to the wealth of the world, may deter many from sacrificing the substance for the shadow.

To this end I have determined upon giving an account of the present appearance of the workings of the various companies of prominence, from personal inspection and observation, wherever practicable, aided by old '49-ers, men of large mining experience, who have resided here since the first discovery of silver, and who are thoroughly conversant with all matters pertaining to the Comstock.

Commencing at the south, the first location of any importance or present value is the Occidental.

The Occdental is situated about three miles from Virginia, on the northeast side of the Leet & Birdsall toll road to Dayton. It was originally taken up in 1860 for lime; the character of the surface rock fitting it for that purpose. The amount of silver contained was so small that it could not be profitably worked for that metal in those days of high prices, although several parties during the succeeding five years attempted it at various times. Finally, in July, 1865, the mine passed into the possession of Messrs. Weston & Slanck, who, having a mill of their own eligibly situated, were enabled to work the rock with a small profit. Since then the quality of the ore has steadily improved, as depth was attained, and the bullion shipment has risen to about $40,000 monthly; $9,000 was shipped during the past week. Under the management of these gentlemen about 40,000 tons of ore have been worked, yielding over $700,000; the rock averaging from $15 to $18 per ton, and paying a profit of from $5 to $7. At present but eighty tons per day are being shipped to the mill, owing to the wretched condition of the roads, which renders hauling almost an impossibility. It is intended, as soon as the weather admits, to commence the construction of a mill at the mouth of the lower tunnel, to contain forty stamps, or more, if required, with a daily crushing capacity of 100 tons. The mill will cost $80,000. When completed the immense bodies of low grade ore which the mine contains can be extracted and reduced at a cost which will leave a net profit of from $3 to $5 per ton.

The Occidental is located upon the same lode as the claims in Flowery District; the cropings being plainly traceable for its entire length of 1,800 feet, and through the adjoining claims on the north. No assessment has ever been levied; the rock paying from the surface down.

The ore is at present being extracted by a tunnel commencing a little above the traveled road, but a tunnel has been driven in 820 feet, some distance down the canon, and should cut the lode in from 50 to 80 feet farther. It is confidently expected that the lode will be struck in that distance in from two to four weeks. At the face of this tunnel a large stream of water is pouring down, the flow being estimated at twenty inches. As it is likely to prove constant, it will be ample to supply the wants of the new mill to be built. The upper workings of the mine, which but recently were flooded, have been completely drained wince this stream was tapped; conclusively showing that the lower tunnel cannot be far distant from the ledge. Fifty and seventy-five feet from the back end small stratas, or feeders, of quartz and clay, varying from two to three feet in width, are struck, which contain a little pay. These stratas have the same dip as the ledge in the workings above. Four hundred and fifty feet from the mouth of this tunnel a connection is made with an old tunnel running east, known as Lee's tunnel, by which a good current of air is obtained.

I should have stated, perhaps, that the ledge runs nearly north and south; the exact strike being north twenty degrees west. The dip is about forty-five degrees. Both tunnels of the company are run in a direct north and south line.

The lode is struck in the upper tunnel one hundred and eighty feet from the mouth. The tunnel then deflects a little to the west, following the ledge. No hanging or foot-wall is here exposed. At this point, and for several hundred feet, the lode is largely composed of gypsum and carbonate of lime. Further on it assumes more of quartzose character; as indeed, it does as greater depth is attained.

Two hundred and seventy feet in the foot-wall is exposed, and the ledge is cross-cut for thirty feet without striking the hanging wall. At this point there are two bodies of fair milling ore, eight feet in width each, one lying directly on the foot-wall, the other to the east, with a division of about twelve feet of low grade rock, which can all be worked with profit at the new mill. The eastern body has here been stopped out for some fifteen or twenty feet below the floor of the tunnel, and both bodies have been stopped up eighty or ninety feet; the rock paying from $15 to $18.

A few feet farther on a second chamber has been excavated, forty feet in width and about fifty in height, of the same character of rock.

A little over three hundred feet from the mouth a winze has been sunk, following the foot-wall, to the depth of 110 feet, from which large quantities of ore are being extracted. The quality improves somewhat with depth, and the ledge widens. This winze will connect with the lower tunnel, a distance of 400 feet. Three hundred feet from this winze a second has been sunk to the depth of seventy-six feet, also following the foot-wall, which is in good ore all the way; assays of rock taken from the mouth going as high as $90. No work is at present being done on this winze. Besides the extraction from the first winze the ledge has been stopped out at various points for a distance of over 200 feet towards the surface, and the ore is delivered in the tunnel by means of a number of chutes. Between the first and second chute there is a space of 300 feet of solid ground, but sixty-six of which have been worked out. The course of the ledge is uniform the whole distance, the country rock to the west occasionally swelling and forcing the lode to the east of the line of the tunnel. In such cases cross-cuts for a few feet have again exposed the ledge.

About 750 feet from the mouth, the direction of the tunnel is slightly changed, so as to run nearly north; and it is driven through clay for about 200 feet. The direction is then changed more to the wet, and the lode should again be struck in a distance of 60 feet.

By the workings at present, a body of ore of uniform quality, milling from $15 to $18, averaging ten feet in width, is exposed for 600 feet in length and 400 feet in depth; equivalent to 120,000 tons. Of this, from 40,000 to 50,000 tons have been worked, leaving on hand about 75,000 tons. The quantity of low grade are in sight, which will mill from $9 to $12, and can be worked at a profit when the new mill is erected, is fully as great. Should the lode continue of the same width and quality to the depth of the lower tunnel, a distance of 300 feet from the bottom of the first winze, the Company will have sufficient ore for a number of years.

Fifty-six men are now employed at the mine. Very little timber is used, the ground being solid. One divident of $2 per share (there are 1,000 shares in the claim) has been declared by the company; and I understand that they will continue to pay them regularly, with the exception, perhaps of a few months, when the profits will be employed in the construction of the new mill. The prospects of the mine are certainly very flattering, and with the completion of their contemplated improvements, and consequent ability to crush the immense amount of low grade ore on hand at a profit, the company ought to have a long lease of financial prosperity. 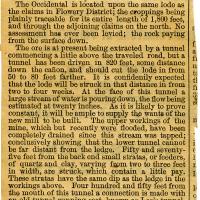