Since my last letter, the machinery and material for the first mill in this District has arrived, and is now in process of erection. The work is being hurried forward just as fast as the energetic application of unlimited capital will admit of, and in less than two months from now, we expect the mill to start, crushing the rich rock. Other mills will soon be erected here, but this is the one that will tell the most important story - the richness or poverty of the District. It took some ten teams, of from six to twelve mules or oxen each, to bring the iron work and machinery from Sacramento here, and when the first instalment of three wagon loads arrived, it was received with great rejoicings by all the miners, and people generally, who turned out in grand procession, with picks, shovels, &c, on their shoulders, and escorted the wagons down to the mill-site, some half a mile below town, marching to the stirring strain of "Yankee Doodle," performed by a fine band of music. The willing hands of the sturdy miners very soon transferred the big heavy castings from the wagons to the ground; a young barrel of "lager beer" was used up, speeches were made appropriate to the occasion, the old pine-clad hills echoed back the hearty cheers of the multitude, the band played "Hail Columbia," and the jubilant reception of the pioneer mill will long be remembered by the participants.

One of these quartz mills is a costly and ponderous affair, and it is no small undertaking to get one of them up. The machinery is all cast and manufactured in San Francisco, sent by steamer to Sacramento, and thence it is brought on big heavy wagons, drawn by mules or oxen, some two hundred miles, over the Sierra Nevada to the Territory. The freight bill alone, from San Francisco here, for this mill, amounts to over four thousand dollars, and the mill, when completed and running, will cost over fifty thousand dollars.

The mines of the District cover an area of some six square miles, the general direction of these gold and silver bearing quartz ledges is N. W. by N. and S. F. by E., running parallel with each other, at a comparative distance of from ten yards to two hundred yards or more, apart, the intervening spaces being of the regular soft granite formation of the country. The "enclosing wall" or "casing" of each ledge, is a soft white rock, somewhat resembling chalk, but not so white, and much harder. The ledges or "leads" are well defined, and are traced by the "croppings," on the surface of the ground, often for many miles, but they sometimes take a sharp "dip," and are "lost." They are generally from two to ten feet in thickness, and descend to an illimitable depth. In fact a good silver mine is considered eternal and inexhaustible, becoming richer the deeper it is worked. The ledges are discovered by the "outcroppings" on the surface, which plainly indicate the locality and direction, although many ledges show little or no "croppings," and therefore are only discovered by close search, or by accident; these are called "blind ledges."

By the laws of this District, the discoverer or "locator" of a claim, is allowed to locate two hundred feet each, for every man in his company, and one extra two hundred feet to himself for the discovery. There are generally from six to twelve men in a company, and the first thing is to put up a notice on the claim, indicating the ground claimed, the names of the claimants, and name of the claim. Then the claim has to be recorded by the mining recorder of the District, who puts a fee for his services in measuring out the ground claimed, fixing a stake at each end of the claim, and recording the same, fifty cents for each two hundred feet. Thereafter, there must be ten dollars worth of work for each two hundred feet, done upon it each month; in default of which, the claim is liable to be "re-located" or "jumped" by outside parties, who in tum have to go through the same routine.

After locating and recording a claim, the next thing is to "prospect it," which is generally done by sinking a shaft , or running a tunnel, with as little work and expense as possible, the only object being to examine the vein as far beneath the "croppings" as practicable. If the ledge runs through a steep hill, a tunnel run into the side of the hill is the best way of getting at the lead, but if it is in a flat, a shaft has to be sunk. A practiced eye can tell whether the rock is "good" or not, the silver in combination with the baser metals, sulphurets, and pyrites of iron, antimony, and other minerals, giving it a blueish, and the presence of the red chloride of silver, a reddish cast. There is also much gold found in combination with it, but the silver generally predominates in much the greatest proportion. Of course the expense of "prospecting" is considerable, and has to be divided equally among the company, according to each one's "interest." Sometimes a company will do all the work themselves, taking it "turn about," and not hire any work done; but most generally an "assessment" is made, of perhaps ten or twenty cents to the foot or share, and men put to work either by the day, or by contract.

When a claim is found to be good, the company is most generally incorporated, and the control of the business of the company placed in the hands of a board of three or five trustees. On incorporating, the certificates of stock are got out, which are tangible evidence of the amount of each one's interest in the capital stock. These certificates are generally gotten up in San Francisco, and are printed on fine paper, with appropriate designs, vignettes, and engraving work, something of the same style as bank notes, but in size, somewhat larger. Much of it is gotten up in splendid style, without regard to expense. - On the certificate is stated the amount of capital stock, number of shares, where and when incorporated name of company, where located, &c., and goes on to set forth that Mr. ---, is entitled to a certain number of shares in the capital stock of the aforesaid company.

Each certificate is signed by the President and Secretary of the company. For instance, if I owned two hundred shares, I could have it issued to me in "tens" and "fives," or any other convenient form, as best might suit me, and if the ground were worth five dollars per foot or share, each certificate would represent the value of fifty, or twenty-five dollars, as the case might be; and with these certificates much trading is done, it being to a certain degree used as money. In some of the older Districts, Virginia for instance, companies are gotten up, incorporated, and stock issued on no ledge at all; real bogus affairs. Their issues are called "Wild Cat" stock, and the stock market is pretty well supplied with it. The stock brokers understand their business, of course, and by combining together they are able to puff and blow these "Wild Cat" stocks, until they often run them up to a higher price than what really good stock is worth , and about that time they sell out, and down goes the "Wild Cat," to be bought up cheap, and repeat. In mining stocks, of course, there is the greatest kind of chance for wild speculations, and many a fortune is won and lost at it; but investments in the stock of a really good mine, the reputation of which is fully established, are really good; for the stock increases in price, as the mine turns out better. The "Gould and Curry" mine, for instance, at Virginia City, on the far-famed "Comstock" ledge, is now sold at over six thousand dollars per foot or share, which three or four years ago went begging at five dollars per foot.

When a claim is ascertained to be rich enough to pay for working, the rock is taken out in a systematic manner, by means of spacious tunnels and shafts, and hauled in heavy wagons direct to the mill, where it is crushed, and the precious metals separated, at a cost of about twenty to thirty dollars per ton, and what remains over and above expenses, is divided among the stockholders, according to the number of shares which each one holds. The "Gould and Curry" declares a monthly dividend of one hundred and fifty dollars to the foot or share.

In this District, there are a great many claims that are known to be good, but as nothing has been or can be made from them until the mill can crush the rock, the stocks in them are selling from five to fifty dollars per foot. Among the most prominent among them are the "Shiloh," "Wagram," "Sharon ," "Dacotah," "Rey Del Monte," "Rapidan," "Monte Cristo," "Rappahannock," "Minerva," and "Constitution."

Although we are essentially a mining community, here in Como, yet we manage to get considerable excited on the subject of politics. - Last year the secessionists had it all their own way here, and a Union man was a rarity; but on the 2d inst., at our general election for Territorial and township officers, we came near beating them. As it was, it was a "draw game"; and this is about the only precinct in the Territory where the Copperheads had any show at all; we will give them more next year. The Territory went overwhelming for the Union, some precincts not showing even one Copperhead vote. The vote for a Constitutional Convention and formation of State Government, was also carried by a tremendous majority; so make room on the old flag for a new bright silver star, for the new State Washoe, will soon be asking a place among her sisters of the Union. 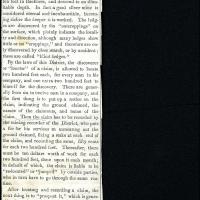