You have probably ere this, learned by the papers, the glorious result of our late election here in California. Secessionism received on that remarkable 4th of September, a rebuke as signal and decided, as it was unexpected, not only by the traitorous portion of our community, but Union men themselves hardly anticipated such a grand victory.

Just before the election, the feelings of all parties were wrought up to quite a state of excitement. Three parties were in the field, Republican, Union, and Secession. The Pony Express, and telegraphic wires, were every three or four days bringing us fresh and most stirring news from the seat of war; news I can assure you, that was most anxiously sought, especially by those who had relations, or friends engaged in the bloody strife. Military companies were being rapidly formed; recruiting stations were all around us, and the volunteers were fast collecting together in large camps of infantry and cavalry. The public sentiment, of course, seemed to be for the Union, but we well know that there were many who called themselves "Union men,” but who were yet wavering, or were believed to be in reality "wolves in sheep's clothing."

The extreme Southern Counties were also known to be of the secession order, and secessionism plainly seemed to be rapidly on the increase. Each man even began to mistrust his neighbor. Well we knew, that if the wrong man was elected Governor, and the traitors were to get command, civil war would be at once inaugurated in our Golden State; and those who knew the generally excitable nature of our population, might well believe that it would be a most violent, unhesitating, bloody, hand to hand contention, totally unlike the war in the South, which seems to us to be conducted with great circumspection, on scientific principles of great profundity, and thus far to consist mainly in the occupation of some big, comfortable forts, or in "Big Bethel" blunders, or in “Bull Run” fights. But we are looking daily for the Pony Express to bring us a better account of things.

A day or two preceding, and on the day of the election, the Republican and true Union men, began to form themselves into companies of Home Guard, in view of the fact that we knew not the real amount of the Secession element, and in fact we over estimated the strength of the enemy. The war spirit ran high. In the little precinct of Milpitas, which polls less than two hundred votes, a company of cavalry, one hundred strong, was enrolled in less than half a day; nearly all of them farmers. (Us among the number, of course.) But the glorious result of the election, showed that after all, the enemy was far weaker than we had any idea of, and so our farmer cavalry, with their plow-mules and scrub­mustangs, didn't need to turn out at all, and won't unless future troubles may arouse our military blood into a belligerent state.

What few secessionists there are about here, are very quiet and unassuming now, but in the extreme Southern counties they are so strong that they feel pretty saucy, and confident. The strong secession vote cast in that fine region of country, was probably what induced Gen. Sumner to immediately send those regiments of volunteers down among them, to enjoy their luxurious hospitalities. It was a capital good move.

Orders were received on the 4th inst., for the removal of the whole of the regular troops on this coast, with the exception of four companies of artillery, who will be retained to man our forts. They are ordered to Washington, and when they are collected in from Oregon, Washington Territory, and this State, they will amount to about 3000 men, considered by military judges to be the very flower of the U.S. regular troops. They are not needed here, as the volunteers can take their places; and these now amount to five regiments of infantry, and a regiment and a half of cavalry, making in all 6,500 volunteers under arms, well equipped in every respect, and from what I saw of them in the camps near San Francisco, a finer lot of men cannot be scared up in these United States.

As Californians, they are better adapted to camp usages and the viscissitudes of a soldier's life, than were the volunteer firemen and butcher boys of the East. It may be, that I have a sort of predilection in favor of the soldier boys of my adopted State, but some of them were former companions of mine in the mountains, where we mined, hunted, and passed through the many rough scenes of excitement and danger, incident to a miner's life, together, and from what I know of them, I have faith to believe that should they happen to be called upon to assist in quelling the rebellious chivalry of the "sunny south," they will not be found wanting, and will render a good account of themselves.

But oh, it is indeed humiliating to the souls of true loyal Americans, to see and appreciate the present sad condition of our well beloved country. The glorious old Star Spangled Banner trampled in the dust, and the very existence of our motherly Union menaced by traitorous sons, whom when nursed, reared, and taught from infancy, and now grown to manhood, they disown their parent, and defiantly turn their traitorous swords upon the bosom of the mother who skilled them in the arts of war, fondly looking forward to the future when these, her brave sons, would ever stand ready to defend with their true hearts and swords, their mother's life and home.

Oh! Jackson, Webster, Clay, illustrious ruling spirits of the past. It was well that ye died while yet our country's flag waved proudly over the united and happy Republican sisterhood of States. When our proud eagle yet soared with undimmed eye, and not a feather was torn from his wing. When the royal nations of Europe were made to feel and respect the power of Young America, and were not as now, gleefully smiling at the failure of the great "Republican Experiment;" as they were pleased to term it.

But brave hearts and true hands, fight on. Rally all to the support of the Union and the Constitution. Rebellion must be crushed out, and traitors must be punished as traitors deserve. Those that cannot fight, must back up those that can fight. While our friends and brothers are manfully combatting the traitors on the battle fields of the South, let us keep down treason and traitors in our midst. We have traitors of the meanest kind among us, who openly give aid and comfort to the enemy, both by means of speeches in public, and through the press. There are also those high in office; servants of the Government, who should be ever guarding the best interests of the Government, and seeking to make the burden of taxation as light as possible upon the people, but who are yet shamelessly directing all their energies to taking advantage of their official station during this unfortunate war, to make all the money they can, out of it, and fill their own greedy pocket. Let all those traitors and rogues be treated summarily as they deserve.

The Rev. Dr. Scott of Calvary Church, San Francisco, has always been a ''southern sympathizer," and for some time past has been rapidly gaining in unpopularity, from his secession sentiments being more and more boldly expressed. All the other churches in the city had poles raised upon them, and so on Sundays display the Stars and Stripes; but he refused to allow the flag to be raised on his church, and a short time ago he expressed some of his traitorous views in print, and from the pulpit declared among other sentiments of the like order, that in his opinion "Jeff Davis is no more of a traitor than was George Washington."

Now this was piling it on rather heavier than the people like it, and so they concluded to put a stop to it. Accordingly on Sunday, the 22d ult., when the Rev. Dr. came to church he found the Stars and Stripes floating from various parts of the building, and on the opposite side of the street, hung by the neck an effigy, labeled "Dr. Scott the reverend traitor." A large and excited crowd was also gathered in front of the church, and a strong body of police were on hand, who principally by persuasion succeeded in removing the effigy.

By 10 o'clock there was nearly 3000 people in the street but they were rather orderly, and with the exception of some few little incidents nothing remarkable was done. When the Rev. Doctor arrived, no one attempted to impede his progress, although some few groaned and hooted at him, but as soon as he had passed into the church, the crowd rushed in, and at once filled the building in every part, and the throng in front was very dense. He proceeded with the services, in his customary manner, but was very guarded, and avoided giving offence, and it was indeed well that he did, for although the entire police force of the city were there, they could hot have saved him from the fury of the people.

After services, the Doctor accompanied by his daughter, rode home in a carriage which was in waiting - the police keeping the crowd back. As the carriage drove off, some of the crowd gave groans for Dr. Scott, whereupon the Doctor's son William about 18 years of age, made himself kown, and talked very violent and showed a revolver. Of course there was a rush, and the young man would have been most summarily dealt with, had not the police rushed him off immediately to the Station house, where they kept him till the crowd dispersed, when they took him safely home.

Dr. Scott sent in his resignation next day to the church, which was however anticipated by his dismissal, and he left in a few days afterwards for Europe, having sold out his property and all his interest in such a very intolerant city as San Francisco.

The State and County Fairs are all over now, and were characterized by but little out of the common course of such things. Plenty of the finest stock of horses and cattle were there, and the vegetable department exhibited a grand collection of immense pumpkins, mammoth cabbages, unreasonable beets, huge turnips, &c., and such a collection of fruit, that for beauty and size, can only be found in California.

At the State Fair, one Tom Rooney under took to ride horseback; 210 miles in ten hours, on the Yolo Grove Course. He rode 132 miles and quit. At the time of quitting, he had gained seven miles over 21 miles an hour. - The reason why he quit, is said to be because he had not enough horses - having only seventeen ­ and that he drank rather too much whiskey. Most of those who were present, seemed to think he could have accomplished the feat, if he had enough horses, and used more discretion in his drinking of liquor. Don Ramon Pice - a Californian - on-the San Jose course last year, rode 150 miles in six hours and seventeen minutes. But 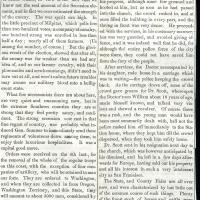