And now again is harvest - the busiest time of the year with us of the farming community. No one has any excuse for being idle now but all the stragglers that come along, find plenty of work in the harvest field, and at wages of from $1.50 to $2.00 per day. As I predicted in my last, the long drouth we had in the spring had the effect to materially shorten the crops, so that we shall not have so much grain as last year, by one third. The war has its depressing effect on us, as well as with you, but not perhaps to so great a degree. It most direct effect on farmers is the rise in the price of grain sacks, which are four or five dollars per hundred, higher than they were last year. The cost of sacks is quite an item in harvest time, especially in a common crop of a thousand sacks or more.

Near here, in a large field, is "Leland's harvester" at work. It is quite a curiosity even with us, and it would make your old "down east" farmers open their eyes I know. It is a large threshing machine drawn by twenty horses. In front, and low enough to cut off the heads of the grain, is a cutting arrangement, which can be raised or lowered at pleasure, according to the height of the grain. It cuts a very even swarth of twelve feet in width, taking off all the heads of the grain, which pass directly into the threshing machine. The chaff blows out behind, and the clean grain runs out from a spout in the side, into the sacks which are hung on to receive it. A man rides on a platform to tend the sacks and sew them up as fast as they are filled. He then dumps them off behind, and they are left scattered all over the field. The horses go at a common walking gait, two abreast, and are driven by five drivers, each driving four horses, and riding in the saddle, postillion fashion.

"Old Leland" himself rides perched up on top of the machine like a pilot on a river steamer, to see th.at the whole concern navigates right. He carries a long pole in his hands, with which he reaches down and clears the cutting apparatus, in case it gets choked by mustard stalks or other trash. This machine is a large, unwieldy concern, and would not do so well in small fields as in large ones, as the stir and bustle in turning corners, reminds one forcibly of "tacking ship." This machine was got up by Leland some three or four years ago, but has not done very good work until this season.

The fruit crop this year is first-rate, and there being more and more trees in bearing every season, fruit is very abundant and very cheap. Peaches are fast ripening and even now, they are flooding the market and can be bought in San Francisco as low as 50 cents per basket of about 30 lbs. Pears, apples, &c., are also fast coming in, and the trees are all overloaded.

The San Francisco and San Jose railroad is being radidly pushed forward, and the screaming locomotive will soon be rattling through this beautiful valley. This is another link in the great Overland Railroad which we have so long talked of, and sooner or later must have. We Californians appreciate the necessity of this great work just at the present time, much more than you do. True, we have a daily Overland mail, and a Pony Express, and the telegraph from both sides of the continent is reaching far out, and the ends of it are rapidly approaching each other. Very soon we shall be enabled to hear of battles fought in the "sunny South" about as soon as you can know of it. But although we can thus have great facilities for communicating mentally, yet that will not suffice. We want to be able to receive a telegram from the resident, calling for a regiment or so of troops, and within a week personally report ourselves to “Uncle Abe,” ready for duty. We have a regiment already formed, and waiting to be called for, but they will have to take the old sea route, round about by Panama, instead of being whirled directly across the country by the express train.

As I have said in my former letters, secessionism is at a discount here. California will be loyal and true to the Union.

It is true we have many traitors among us, who are bold enough to even publicly proclaim their sentiments, but yet we are able to control all such with an iron hand, and give our sister States help to put down the rebels in their midst. The secessionists among us number about fifteen thousand, and perhaps more, but they are pretty well aware of the inexpediency of any rebellious demonstration on their part.

On the 4th of July, as an offset to the general Union celebrations of the day, the secessionists of San Jose got up a small private pic-nic away out one side by themselves, where it is to be presumed they talked treason, and murdered the government to their heart's content.

They were even bold enough to say that they should raise the secession flag on the occasion, but fortunately for them, they didn't do that. I know of many who watched or the appearance of that traitorous rag.

Had they hoisted it, then pic-nic would have ended in a row, and some one might have got hurt. But they did not dare to carry out their threats. Should the secessionists here in this State rise in arms and make any sort of a demonstration against the government, I hardly know where it would end but understanding the excitable elements of the California population as well as I do, I believe they would be utterly exterminated. All who were taken alive would be treated to a bit of rope, with a slip noose in the end, after the old style here.

To be known as a secessionist, is to be looked upon with distrust and suspicion, almost amounting to hate. One day a short time ago I was at the blacksmith shop, some three miles below here, and while there my horse got loose, and "seceded" for home, with the saddle, leaving me to "foot it" if I chose. As good luck would have it, an old farmer came along in a wagon, and I got a chance to ride with him. We had not gone far, before he turned, and looking me square in the face, said - "Wal stranger, before we go any further, I'm jest a gwine ter know yer politics; are ye a Union, or a secesher? If yer a Union, yer all right, but if yer a secesher, jest git out of ther waggin, for I'll jest be dog on, if yer kin ride with me."

I told him I hailed from old Plymouth, was born of a Union mother, and brought up by a Union father; that my whole family were sound on the Union, and were I not for the Union too, I should certainly be a shame to the Bolt family, and to the old ship that brought me to the country.

"Hooray for you," said the old fellow, "give us yer hand, you kin ride with me, you kin. I'm from old Pike, I am. I don't like a secesher, and ef ever I find I'm in company with one, I jest naterally get shet of him, as soon as possible, you kin bet yer ribs on that. But you’re all right. You're too peert lookin a chap, to be anything but a Union." I acknowledged the altitude of the compliment, and found the old fellow jolly good company during our short ride, and when I left him, thanking him for his kindness, he said I was "right welcome," and he was only sorry that our ride hadn’t been a heap longer. But, 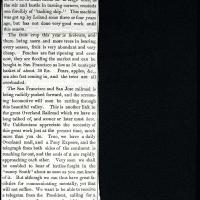