For some weeks past, nothing of special interest has transpired worth writing about. The farming community were busy putting in their crops, and the townspeople in their usual way traded, gossiped, dabbled in politics, drank whiskey, and discussed the weather.

The three first weeks of March we were favored with fine, warm clear spring weather ae the most fastidious could wish. The fruit trees bloomed, and leaved out, the green grasses grew at the rate of something less than a foot per day, heavenly hued flowers gently breathed their fragrant perfumes upon the balmy air, and the millions of gay little birds, merrily skipped about, trilling from their jolly little throats, tuneful praises on the beauties of Nature. On the 27th, however, there was a great change. A heavy south east storm with violent winds, followed by a deluge of rain, raged in full fury. During the after ­ noon and night of the 27th the rains just poured down, steadily, and without in - termission. When I first arrived in California I was struck with wonder at the singular depth of the ravines and water courses. Every little stream of water that in the fall would hardly suffice to quench the thirst of a stray dog, had a wide bed, and square, steep banks of the most unreasonable proportions. But after seeing a few specimens of the winter rains and floods, I wondered no longer.

On the 28th every ravine from the mountains on both sides of the valley were roaring and foaming with volumes of water and dashing in furious muddiness down towards the Guadalupe and the Coyote, the two creeks or rivers that run down through the valley, and empty into the head of San Francisco bay. The Guadalupe, was much swollen but the Coyote was much more so. In the afternoon the Coyote rose over its banks, and immdated the country for several miles on each side, down towards its mouth. It flooded across into the Guadalupe, and overflowed the town of Alviso, considerable damage was done to the crops by the sand and drift wood being deposited upon the fields. Fencing was taken away by the wholesale, and many hogs were drowned. But few cattle were lost, as they were got out of the way in time. A horse, saddled and bridled, came floating down. He was dead. Where he came from or who his rider was is not known. If the rider had not been drowned also, he should have been heard from by this time. Perhaps in trying to ford the stream, they were swept away. Many a man has thus been lost track of here in California, and never again heard from. No such overflow has been known since the winter of '52. During the night, as no more rain fell, the waters subsided and the next day, gradually resumed their former channel. The difficulties which have so long existed here in relation to Spanish land grants, instead of becoming settled have become more and more complicated. Very few of these claims have as yet been finally settled and disposed of, but nearly all are yet pending before the courts, in some shape or other. Very many of them are known to be fraudulent, and will eventually be proven to be so, but meanwhile, the law permits them to bring suit against the settlers upon them and eject them. The consequence is that the settlers in all parts of the Valley have been harassed by a set of thieving land grabbers.

They have been forced into lawsuits, their lands taken from them, the homes they have occupied and improved for years, broken up and destroyed, and they driven about until at last by degrees they have been forced to form themselves into a combination to resist any farther aggression on the part of these legal land-sharks. There, at Evergree, Mountain View, Gilroy, McCartysville, and several other points the settlers are organized into armed companies.

The settlers on the Chabolla (Chavoya) Grant some five or six miles from here, are at the present being con­siderably stirred up. This grant is known to be fraudulent, and is, like the others, still pending before the courts, but meanwhile the lawyers connected with it have brought suit, and procured a writ of ejectment against the settlers. A few days ago Deputy Sheriff Mclume, lawyer Matthews, and one or two others, rode out there from San Jose in a buggy, to serve the writ, and dispossess the settlers. They were met by a small armed party of those they came to eject, and ordered at the peril of their lives to go no farther. Their revolvers were taken from them, and they were escorted back to town, where their weapons were politely returned to them.

The sheriff of course, although thus resisted has his duty to perform, and has therefore for the last two or three days been busy summoning every one he can come across, to serve on a posse to assist him in executing the writ on Tuesday next, April 10th. He has already summoned a thousand or more, settlers, merchants, lawyers, doctors, bummers, grant holders, or anything else. The settlers are well prepared to resist and will be reinforced from all quarters in that day.

The sympathy of the people generally, is in their favor, and if there is any fighting done, the sheriff's adherents will get badly used up. But there will be no fighting, as nearly the whole of the posse which the Sheriff has summoned, is composed nescessarily of settlers and those who sympathize with them. This makes no difference however with the sheriff. He is obliged by law, to exhaust his powers in his own county first, and not being able otherwise to execute the writ, can then call on the Governor for assistance.

After the great battle has been fought, I will give you an account of it, together with a list of the killed, and wounded, and the number of scalps taken, that is to say if I am not killed too, for I intend to be "thar.” 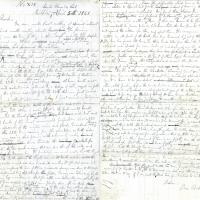