The news from your side of Uncle Sam's ranch are of paramount importance, and most eagerly looked for and discussed by us of the Pacific just at the present time. Every time the Pony Express comes in, you should see what a deep and intense interest there is manifested by every one in the newly arrived intelligence from headquarters.

The North, South, East & West are represented here, and of course sectionality of opinion does not fail to be manifested. Some of your pestilent East winds have blown a few loose seeds of treason, disunion, and secession and scattered them among us, but such seed finds very few spots on our fertile & prolific soil, where it can get any root at all. In fact, although some of the seed may fall in some favorable localities, yet it will eventually be rooted out, same as other tares and weeds.

Ever since the adoption of the State Constitution in '49 there has been a certain political clique who have continually and notoriously directed their efforts towards the accomplishment of one grand design - the division of California into two parts, and the erection of a slave state from the Southern half of it. This was a splendid, and to them a highly desirable scheme but they couldn't make it win. This clique was composed of Southern men and they were of the Whig party while that party existed, but when Whiggery merged into know-nothing-ism, and finally stepped out altogether, they all threw a couple of flip-flaps and came up Democrats, or something similar.

Stockton was and is yet their headquarters, and their leader used to be the Hon Senator Henry A Crabb. They have contrived first and last by means of mutual assistance in the way of wire pulling and political chicanery to work into numerous influential and lucrative state, county, and municipal offices. They were the originators of, or helped to originate, the famous fillibusting expedition of Gen Wm Walker, when "the gray eyed man of destiny" tried so hard to be "President" of their slaveholding "Republic of Lower California" and [illegible] of Sonora. Neither of these dodoes could be made to work, so Crabb thinking he could do better, by going in person, went with a few dozen men on a wild, illy conceived, reckless expedition into Sonora, where instead of revolutionizing the country, they were taken prisoners almost as soon as they arrived, and Crabb and his companions were everyone shot.

The disastrous result of all their filibustering operations rather disheartened the clique, but of late the news from home have brightened their hopes, and they with others, composing the Southern pro-slavery element of our population, now advocate strongly a "Pacific Confederacy." They say the Union is dissolved; the South has seperated from the North, and that we should follow the example of the gallant South, and repudiate all attachment to the odious North; in fact form a fine little Republic of our own, composed of Oregon, California, and some of the territory South of us that wouldn't make bad slave-states. They have even succeeded in poisoning the e- and mind of Gov Downey, until he nearly coincides with their views. But come to cipher the whole thing down, it amounts to this - The masses of the people are what rules the State, and they, the people, said on the 6th of November last, that California belongs to Freedom, and not to Slavery. The Union is not dissolved yet awhile, and even though the chivalry should take their state and their sable "property," and by permission, have the glorious Union and the protection of the "Star Spangled banner," together with some few of their cotton-headed neighbors, we can say to them "depart in peace." Perhaps they know their own business best. Mr Gwin not long since said in the US Senate that in case of separation, "California would go with the South," but since then, Mr Latham has told them that California would not go with the South, but would still remain with her sister free states in the same glorious old union as ever. Mr Latham is right. - But there is one natural and a strong band which would have done, and will still do more to preserve and perpetuate the Union than anything else and that is the Pacific Railroad. Our Senators and Representatives never have seemed to fully realize the vast importance of that one measure, or if they have, Southern intervention has always kept it in the background. Will they be able to do so much longer?

The long expected decision in the case of the United States vs the company claiming and working the New Almaden mine is at last rendered, and given in favor of the company, and the odious injunction which has rested upon it for the last two years is now dissolved, so that this celebrated mine, probably the best one in the whole world, is once more in full operation, and turning out great quantities of quicksilver, as of old. The fires were started on Saturday morning last, the 2nd inst. A grand feast was given by the proprietors, cannon were fired, and the festivities were kept up through Sunday. A general good effect is already perceivable in the fresh impetus given to business everywhere in the county. The case is appealed on both sides, to the US Supreme Court. On the part of the United States, not being satisfied with this decision of the lower court, and on the part of the Company, as not getting so much land confirmed to them, with the mine, as they think they are entitled to. 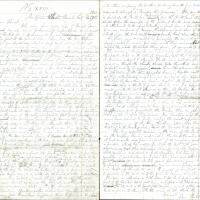