It is Christmas to-day, here in California, as well as with you home christians of the Old Colony, and it probably observed about the same, as a general thing; if anything, it is rather more of a holiday here, than with you. Last evening, many was the young heart that was made joyful by a visit from old Santa Claus, who so benevolently perambulates the world on Christmas eve, regardless of rain, wind, snow or frost, for the express purpose of delivering expected, and unexpected presents, and filling the numerous juvenile stockings he finds hanging with open mouths, wishfully ready to receive any stray blessings the good Patron Saint may be pleased to deposit therein.

The dealers in toys, fancy articles, and pretty books, are now doing a brisk business, indeed, and last night old Santa Claus had to start out with a large mule train heavily packed with his millions of small traps, his old reindeer sleigh not being anywhere near of sufficient capacity for the purpose. How the warm blood danced in juvenile veins, and eyes merrily twinkled this morning, as the highly acceptable Christmas presents were joyously displayed.

This suspension of hosiery is not always confined to the juvenile population, altogether. - I was once just chucklehead enough to try my hand at it. I was in the mines. I only had one pair of stockings, so when I turned into my bunk for the night, I took the best stocking of the two, and hung it outside my cabin door. Next morning, when I turned out, I opened the door, and found that the stocking had vamosed.

Could Santa Claus be a thief? I hardly thought he, or any one else could be so parsimoniously acquisitive, as to steal that stocking. I strongly suspected one Bill W--- who camped just across the gulsh from me, but he always denied it. I thought he might have taken it in retaliation for a joke I played on him once.

He was not a very early riser, so one cold morning, noticing his old felt hat hanging on the peg outside the door, I quietly slipped over there, took the hat, and placed it over the top of the stove-pipe which stuck through the roof. While I was eating breakfast, I was much amused to see Bill, out getting kindling and starting his fire as he always did - in a hurry. I chuckled to myself as I thought how he would swear when he found his stove wouldn't draw; but there I was mistaken, for the top of the old hat was so full of holes, that the smoke passed out through with but little difficulty; and the heat passing up, soon burnt a hole just the size of the stove-pipe.

After breakfast, I saw Billy looking for his hat, to go out to work. He soon spied it with some three feet of stove-pipe run up through it. He climbed up and got it, put it on his head, lit his pipe, like a philosopher, shouldered his pick and shovel, and went to work. - That evening he mended his hat with a piece of an old boot-leg, and made it better than it was before. He always would persist in saying that I did the trick, and he may have taken the stocking in retaliation.

I wouldn't have cared, if it hadn't been my best one. It was mended and fixed up in true miner's style. A big double patch, cut out of an old flour sack, covered the place where the heel was worn out, and the big hole at the toe was all mended snug, by being puckered together, and a string tied round it. I think I should know it if I saw it again.

There are shooting matches to-day in various places, or rather they were were to be, but I think the rain must spoil their fun. Everybody's dinner table is set out with the best they can afford, and luscious turkeys, plenty of pie, and jolly great puddings, are the centre of attraction. Everybody wishes everybody "a merry Christmas."

It has been raining hard, all day to-day as well as all last night, the worst rain we have had this season. The regular winter rains held off so, that we did not get to plowing so early by three or four weeks, as we did last year; but we have had considerable stormy weather lately, which has wet the ground well, and set the farmers to tearing up the face of the country at a fearful rate. All sorts of horses, fine stock, scrub stock, and mustangs, all come in play now.

There is a new style of "gang-plow" lately introduced, which is fast coming into general use, and seems to be a great saving of labor. It is got up and patented by a man in San Jose, and has taken the premium at all the fairs, both last year and this year. It consists of three ten inch plows set in a frame which runs on wheels. The plows are each made upon the end of a stout steel bar, which passes up through the frame, and by means of a cog-wheel arrangement, all three of the plows can be easily raised or lowered at pleasure, by the driver, who is mounted on a seat, which is fixed on the frame, for the purpose. With from four to six horses, one man with this plow can plow from four to six acres per day. It also has a seed-sower and harrow attached, so that the whole thing can be finished up at one operation.

The famous quicksilver mines of New Almada, a few miles from here, are to be reopened in about a week, and the hundreds of people who have been thrown out of employment by the injunction which has so long been resting upon this celebrated mine, will once more be actively employed. This long suspension of operation, has of course been of great injury to this State especially and detrimental to the general mining interests of the rest of the world. It is highly essential that these mines should be re-opened.

Commissioners are now selecting and negociating for a site in San Jose for ths depot, at that terminus of the San Francisco and San Jose railroad. The road is already commenced, and the cars running as far as Mirrin Doleres, and it will not be long before they will be running to San Jose.

This is one end of that great Pacific Railroad; that we Californians have so long prayed for, and intend to have. But - 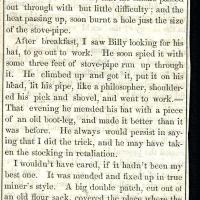