DEAR ROCK: -- Us of the land of gold and silver, are just now in a state of active fermentation, on the subject of politics, and a highly unusual degree of excitement pervades all classes, in view of the important Presidential contest now so near at hand. In every city, town, village, and precinct, the various political parties are formed into clubs, ready with banners and marshalled forces, to go forth to battle on the 6th of November. All the heavy blowers are out stumping the State from one end to the other, and mass meetings, conventions, caucuses, smart speeches, and general enthusiasm, is the order of the day.

On the 8th inst., the news from Oregon of the election of Col. E.D. Baker, as Republican U.S. Senator, was received at San Francisco, and signalized by great jollification and the firing of three hundred guns. Having conquered Oregon, the gallant Colonel has now taken the field and stump in California, and is invading the State for the good of the cause.

The great political parties here consist of three classes, namely: Republicans, Douglasites, and Breckinridge men. The two latter classes both claim to be the regular genuine true blue Democratic party, and it is rather difficult to decide which is which, as they are both made up principally of Irish, Catholics, Greasers and Lawyers. The miners, farmers, and in short all the most respectable portion of the community are Republicans, and I say they are going to carry the election on the 6th of November. You see if they don't. Four years ago, about now, I was very confident, just as I am now, and told you that Fremont was bound to carry this State. Well, I was wrong then, but I am just certain I am right this time. At any rate, although I am no sporting man, I'll bet you ten sacks of barley against two quintals of cod-fish, that California will go Republican.

Silver still continues to come from Washoe, but not by any means in such great quantities as was at first anticipated; in fact the tremendous excitement which existed in regard to that famous locality seems to have been attended with a sort of natural reaction. The attention of the excitable was drawn to a new locality some few weeks ago in the “Coso” migration, of which I wrote in my last, and lots of silver seekers emigrated thither, but I fear with little success, as we do not hear any very encouraging news from there lately.

We had a most bountiful crop of everything this year, therefore produce of all kinds is cheap. Flour is $5,00 and $5,25 per bbl., wheat from 1 1-4 to 1 1-2 cents per lb., barley 1 cent per lb., potatoes 1-2 to 3-4 cents per lb. Fruit of all kinds is plenty and cheap, and a better assortment, "down east" cannot produce. As to that matter, we can raise larger and better fruit here and more of it, than anywhere else in the world. The climate and soil is peculiarly adapted to fruit growing, and although the orchards are all young, they come into bearing very early. Most farmers have an orchard and a vineyard.

Peaches hardly paid to take to market this season. There were no late frosts to nip the fruit this last spring, so the peaches had a good chance, and were so plenty that the price was merely nominal, and large, luscious, downy-cheeked peaches laid and rotted under the trees, for lack of some one to come and eat them.

The land titles still continue to be in the same uncertain and entangled state as ever. It seems as though they never would be settled. Our government did very wrong at the time we acquired California, in recognizing any of these Spanish grants; or she should have definitely ascertained the locality and boundary of each one of them, and settled their cases at once, or bought them out. Most of the grants now in existence have been fraudulently manufactured since our possession of the country, and even the grants that are considered good, have been in almost all instances surveyed in such a manner as to include a great deal more land than should rightfully belong to them. In this valley many grants cover one another, so that as many as three and four grants cover the same section of country. Only one of these conflicting grants can be valid, and such points should have been settled long ago. Judge Hoffman, in the U.S. District Court, is now very busy trying to settle these claims, and is rejecting and breaking up all of these that he finds to be fraudulent. He is also endeavoring to regulate the lines of the grants which are supposed to be good.

The season for fairs now getting pretty nearly through with. The Mechanic's Fair, the State Fair, and the various County Fairs, have been held. The San Francisco Bay District Fair was concluded day before yesterday. The Santa Clara County Fair commences at San Jose on the 23d inst., and will be the last of the season. But – 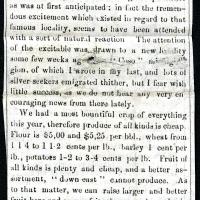