DEAR ROCK: -- The usual yearly routine of natural consequences, brings us round to harvest once more, and we are now right in the midst of the busiest doings of the whole year. On all sides, far and near, is heard the busy rattle and hum of the various paterned machines employed in cutting and threshing the grain, and everybody is extremely busy. No one has any excuse for being idle. Even the stragglers who are ever ranging the country in search of a "job," easily find work now, at the standing harvest wages, - $2,00 per day and board.

And of these stragglers are many who as soon as they are "paid off," shoulder their blankets, - if they have any, - and strike out for the nearest groggery, and for a short period, while their money lasts, revel in the glories of strychnine whiskey, "choice old French Cognac," made in San Francisco, and other delectable compounds of alcoholic drugs and hell-fire.

A day or two may suffice very easily to get rid of the wages of the last week or two, and credit in their case never being given or expected, they must necessarily hunt another "job;" so they take up their old line of march again from ranch to ranch, sure of at least something to eat, for, in harvest, even the meanest kind of a close-fisted Dutchman of a farmer, will not refuse food to one who asks for it, although his door may be closed in the hungry beggar's face for the balance of the year; and as for a place to sleep, haystacks and straw piles lay around loose, everywhere, and constitute the sleeping accommodations of all the harvest hands. When the machines are in the field, harvesting, the farmer has employed, generally from ten to twenty men, add as many or more horses, and the expenses are all the way from fifty to a hundred and fifty dollars per day.

To say nothing of the various big reaping machines, it is a stirring sight to see the "thresher" in full operation. They also are of many different patterns and patents. “Pitts's," "Spencer's," "Russell's" “Hall's,” and others; but the "Pitts's" machine of ten horse power, is most generally in use. The sheaf grain is put in at one end, and at the other end comes out the straw and chaff; while from a spout in the side, the clear grain runs out into the sacks, at the rate of from two hundred to six and even as high as eight hundred sacks of one hundred pounds each, in a day.

The motive power, or "horse-power," as it is called, is a heavy combination of cog-wheels, weighing two or three tons, staked fast to the ground, and from it project five sweeps or levers, to the ends of which are attached the five span of horses, who walk round and round in a circle, after the style of the working of a capstan on board of a ship. This horse power is connected with the main threshing machine, or "seperator," by means of a horizontal iron shaft, called the "tumbling rod," over which the horses walk.

The sheaf grain, to be threshed, is crowded by a man called the "feeder," into a horizontal opening at one end of the "seperator,” about a foot wide by three or four feet long. Here it comes immediately in contact with what is called the "cylinder," a heavy mass of iron work, armed with short iron spikes or "teeth" which play between a stationary series of similar teeth. This heavy cylinder whirls with lightning like velocity, and tears the heads of the grain into chaff at once, which passes out with the straw, over a series of sieves and fans.

Many are the accidents, mostly the results of carelessness, which happen around these machines. Fingers placed unwittingly between some of the numerous cog-wheels, are sure to suffer, and sometimes the "feeder," in crowding in the grain, uncautiously pokes his hand a little too near the spikes of the cylinder, and receives a rap or wound that bids him look out for himself. If his hand should get caught between the spikes, no power on earth could save it. The hand, arm, or something would have to come off at once, or he would be drawn in bodily, in an instant.

Only last week, I happened to be an eye witness of an accident of the kind, that even now makes my blood run cold as I think of it. Mr. Briggs, a friend of mine was threshing with his machine, at a ranch near here, and having business with him, I went to see him. Just as I rode up, they were stopping the machine for some reason or other. The horses had entirely stopped, but the heavy cylinder always whirls for some few minutes by its own impetus before it stops. Briggs was on top of the machine, and in coming down, he carelessly stepped where his right foot slipped directly in among the teeth of the cylinder. The boot, the flesh, and the bones of the ancle and foot, stopped the whirling cylinder, but not until the leg was destroyed nearly to the knee.

We were all paralyzed with horror. We knew not what to do. We tried to turn the cylinder back, but he could not bear the pain. The torn muscles were caught among the numerous teeth and he could not be readily extricated. He was the coolest man I ever saw. He did what none of us wanted to do for him. He took out his pocket knife, and cut his leg off. Yes, he cut away the ragged muscles, and pulled himself loose, when he coolly set himself down and gave directions, while we tied a handkerchief tightly around just above the knee. He bled but little. A man on a fast horse rode five miles to San Jose for a surgeon, at once, while we took Briggs on a pile of straw in a wagon, about a mile to a house. He still retained his presence of mind, and did not faint. In due time the surgeon arrived, and amputated the leg just below the knee, and he is now doing well as could be expected.

The crop now being harvested, exceeds by far the bountiful harvest of last year. The best of flour is five and six dollars per barrel. Wheat is worth only ninety cents per bushel, and barley only fifty cents.

The Indian war, which was waged with such a fierceness in the Washoe silver mining county at the date of my last letter has entirely died out, and no one seems to want to fight or be fought. Mude silver comes from there, but hardly as much as was anticipated.

New silver mines have lately been discovered away down South in Tulare County, some 380 miles from San Jose. They are called the “Boso” mines, and are said to be far richer and better than Washoe. A rush is being made in that quarter, of course. I saw one party of four wagons, leave San Jose for the new land of silver, yesterday. May they fill their wagons with the pure article of silver, it is an excellent mineral to have round, especially in one’s pocket, in the absence of gold change. 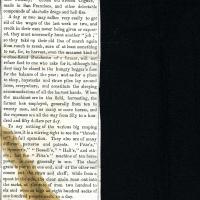