We have but little news in this quarter now-a-days, worth writing about, therefore, of course, I can tell you but little. All classes of us are anxiously looking forward and wondering who are to be the two great nominees for the presidency and our standard bearers in the approaching campaign.

The nominating conventions soon to assemble, have a heavy responsibility resting upon them, and have nice points to discuss as to the suitability and availability of those whom they may nominate.

There are only two great parties to contend in the coming struggle, and they are now only waiting to hear the names of their leaders, to inscribe them upon their banners, and spread them to the breeze.

We cannot avoid the fact that the contest will be almost entirely on the slavery question; a struggle between freedom and slavery; but although this will vastly influence us of the Pacific, yet having long ago settled the point, that our portion of Uncle's Sam's dominions shall belong to the land of freedom, what is of permanent importance to us, and what will sway our vote, will be the stand taken by our opposing candidates and parties, in relation to the Pacific Railroad - that great project of the nineteenth century; a project which speaks but little for American go-ahead-ativeness, for surely, during the time we have been quarreling about it, we could have built the road and had the iron horse dashing across the broad Plains, and snorting through the deep passes of mountain ranges.

The great Pathfinder, Fremont, in days past, found his way across the trackless plains and deserts, to California. Private enterprise followed with an ox-team. Private enterprise put on an overland stage line. Private enterprise is now putting the lightning wire across. Private enterprise in a week or two, will put on a horse express, running over the mail route, at the average rate of eight miles an hour, and expect to deliver despatches at the terminus of the telegraph line in Carson Valley in six days from Leavenworth, Mo. This will bring us within a week's communication of New York, National enterprise should build the railroad, but if it really won't, why just let private enterprise have a show at it, and it will be done right speedily.

Washoe mining stock stands high in the market. Frazer River stock, down below redemption. Washoe is no humbug; plenty of the precious metal is certainly there, for the reason that it comes from there in plenty. Frazer was a humbug, for but little gold was found there, consequently but little ever came from there. It was a "great cry and little wool," unless we may call it a "golden fleece" for the thousands who wildly rushed thither got most gloriously "fleeced." Such doleful stories they told when they made out to get back, about the programme of sufferings and privations they had to go through in getting there, while they were there and the great difficulty of getting back again.

In going to Washoe, all a fellow has to do is to shoulder his blanket if he chooses, and take the conveyance that Nature provides; that is to say, "take up his bed and walk;" and after a pleasant little journey of four or five days over a fine mountain road, he comes to Washoe, where they find the silver. If he don't like silver, he can go into digging gold; and if that don't suit him, or he don't exactly happen to like that region of country, he can just quietly shoulder his blankets again, and the same legs that took him there may bring him back, not starved at all, and much out of pocket either.

Winter has checked operations somewhat in that quarter, but still new and rich discoveries of the precious metals have been made, and from all parts of the state there will be a grand rush as soon as the spring is fairly opened. It is cold, and there is plenty of snow in that region of the Sierra at present.

As I said before, these mines are no humbug; they may not be so rich as they are now supposed to be, but as silver has come in abundance from Washoe, it is fair to presume that there is "plenty more where that came from." In San Francisco it is coined into bright new half dollars at the mint, and in the jewellers' shops it is in the shape of spoons, knives, forks, &c. Barret & Sherwood on Montgomery st., have a cake of it in their show window, about the size of a fry-pan. The San Francisco brokers and speculators run heavy on stocks in the Washoe silver leads, and claims there are valued at so much per foot of the vein. Some leads are worth many thousands of dollars per foot.

The land tiller here still continues to be a great source of trouble, annoyance, and litigation, and instead of becoming settled, they seem to be getting more and more mixed up. Many of them, confirmed grants, and some of them with the United States patent issued upon them, are having their surveys sent back from Washington, as having more land surveyed in, than belongs to them; but there are so many of these grants, covering the whole country, and overlapping each other, that there is but small show for government land. Ejectment suits by the grantees, to eject the settlers, or “squatters,” are prosecuted on all sides, and the numerous lawyers are growing corpulent with fat fees.

The past winter has been very favorable, and very extensive fields of grain have been put in; in fact, although we had an overplus of wheat last season, and the market was glutted, yet still larger crops of it were sown this season, and everything promises another bountiful crop.- Well, bread will be cheap.

Flour is now from $5.25 to $6.50 per barrel; wheat, from 1 3/4 to 2 c per pound; barley, 2½ cts. But little barley was raised this last season, therefore it now commands a high figure, as the limited supply now on hand is used principally in the manufacture of lager beer for the Democratic party. But – 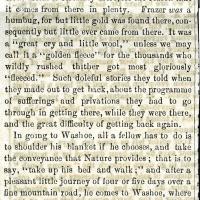