Another "happy new year" to you. Ever "moving on” toward the unknown future, ever progressing onward in the journey of life, hopefully we look forward to each coming year; and as one after another, they glide so noiselessly by to join their companions of the past, let us bid them a kind adieu with their joys and their sorrows, and trustingly look forward to the good that may be in store for us. If there is trouble and sorrow ahead, we shall meet it soon enough, without anticipating it.

But little transpires now-a-days in the shape of news, for me to write about. We are having a very favorable winter if it thus far. Much rain has fallen, to gladden the hearts of both miners and farmers; for surely, to the miner in the dry diggings, nothing could be more acceptable, next to plenty of gold, than a jolly good rain. And the farmer, too, can have no serious objections to the natural irrigation of the land where his crops are sown, giving him a comfortable assurance of a good harvest in prospective.

Christmas is made rather more account of here, as well as in the Southern and Western States I think, than it is with you. Christmas seems to be set apart as an occasion of mirth and happiness; a time for eating good things and making presents; a time when the merchant may shut up his shop, the farmer leave his plow and turn his horses out to roll in the green pasture, and the miner lay aside his pick, and all, everybody, feel especially licensed to be jolly generally; in short, even the dogs in the streets get better pickings, and never feel like growling or fighting on that happy occasion. Then the toy shops too, they do a stiff business about that time, in the doll and pop-gun line, and other articles with which to fill the suspended stockings, and tickle the fancy of Young America.

Our trade with Japan is beginning to assume quite an importance, and two or three cargoes of goods have lately arrived here from that country, so long a sealed book to all except the nation of schnapps and sour kraut. These cargoes are made up mostly of rice, lacquered ware, silks, dried fruit, preserves, carved toys, vases, and other Japanese contrivances of odd design and queer workmanship. A peculiar variety of rice comes from there, much larger than ordinary rice, and as large as hulled barley, The Japanese are rather shy and restricted as yet in trading with us, but this will probably all come round right, by and by.

Anderson, "the great wizard of the North," is now performing a grand engagement at Maguire's Opera House, San Francisco, and nightly draws crowded houses. Great is the rush of the wonder-seekers to see him; and this indeed wonderful magician - who no doubt is one of the same who figures so largely in the Arabian Nights - has, by his inexplicable tricks, astounding deception, and off-hand disablerie, already fully convinced several susceptible individuals that he is the original Beelzebub himself, of whom we read. All modern magicians may doff their respectful hats and bow their humiliated heads before him, their great master.

Next in order comes "the fat woman," Madame Sherwood. I don't know but you may have seen or heard of her before. She was on exhibition in San Francisco, but is now up country astonishing the miners. A few days ago I was in the city, and in the evening, passing up Bush street, my attention was arrested by a large transparency, on which was a huge daub of dirty brown paint, supposed to be representing a woman of very mammoth proportions, dressed in a bright blue dress. And near it, hung another transparency representing an immense serpent. Thinking this must be no less than Eve, and the arch tempter with the apple, direct from the Garden of Eden, your correspondent immediately invested "two bits admission,” and followed the people that were stringing in to the open door near by. A lot of tall Pikes and Hoosiers prevented my seeing anything, at first, but by dint of hard crowding, shouldering through edgeways (you know how,) and representing myself as an editor, I managed to work myself into a good place among the women and girls.

An agreeable man with a black moustache, was handling the big "snaik," shouldering portions of him, patting its pretty head, and smoothing his hand along its cold shiny hide, all the while, in a loud voice, describing the various beauties and good qualities of the varmint, its great docility, sweet disposition, its natural capabilities in the way of swallowing small cattle, &c. It was a boa constrictor, 28 feet long, and weighing 240 lbs. Then there was "the infant snake," of the same sort, and weighing 110 pounds; length, 18 feet.

Having disposed of the snake department, he introduced Madame Sherwood to us, who thereupon rose, stood up on the stage and bowed as well as she could, to the audience. He then went on to tell of and describe her points and qualities as he had done the snake. “28 years old - native of Ireland, but has lived in the States for the last 11 years - height five feet - circumference round the waist, seven feet - weight, 643 lbs. - kind disposition - eats no more than a common person - enjoys perfect health - never was sick,” &c., &c., &c. Now she was a bouncer. Just think of it, six hundred and forty-three pounds of human flesh all in one lump.

Take it all round, it seemed rather of an interesting exhibition, and I came away fully impressed with the conviction that if any mortal Adam could be tempted by such an Eve as that, he must be fond of apples. But – 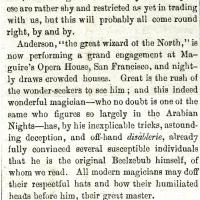