Time flies on; but yet little news of much interest transpires within the Golden State. Our annual state and county fairs are now all over with for this year. The fair in this county closed a few days ago, and it decidedly surpassed any previous one that has been held here, and in some points rather went ahead of the state fair which was held at Sacramento.

The show of stock was especially fine, and so choice a lot of thoroughbred horseflesh is hard to find in any state. "Belmont," the premium stallion, whose pedigree extends through a long line of illustrious ancestry, away back to the far-famed barb of the Arabian deserts, is a most splendid animal, and it would take many thousands of dollars to buy him. The "Black Hawk" stock of the "Morgan" breed of horses was well represented, and other noble animals of scarcely inferior merit were also there, displaying in their fine symmetry of form, and beauty of action, a marked and striking contrast to the common stock of horses in every-day use.

Of the horned stock, the Durhams and Devons were most prominent, and among them were many fine animals of high and illustrious pedigree, “Washington," a young Durham bull just imported at a cost of twenty-eight hundred dollars by R. Blacon, Esq. of Alameda county, attracted much attention, but the premium - of one hundred dollars - was taken by "Guelph," a noble large Durham bull. The second, by “John O'Guelph," also a Durham, and the third premium was given to "Prince of the Pacific," the yearling calf of “Lady Bolton," a thoroughbred Durham heifer. These premium animals are owned by Mr. Emerson of Mountain View, and were imported by him two years ago. They also took the premium of the state fair. - Much attention is given to the improvement of horned stock by the breeders in this state, and the time will soon come when the general breed of cattle in California will be as fine as in any part of the world.

At the fair ground is a splendid race-track, and many grand races came off during the fair. Fine trotting matches by some of the celebrated racers, serab races, free for all sorts of horses, and loot races, in which the “fast boys" tried their speed.

In the hall of exhibition was a grand and profuse display of very large and luscious fruit of every description, also a numerous collection of machines, tools and implements of various uses, and specimens of handiwork. The show of vegetables was of course what you might expect to see here, of the tremendous kind. Beets that beat all creation; potatoes, onions, carrots and turnips that defy the world to "turn up" any that can equal them in size; and as for squashes, they were of the big kind, too, weighing as high as one hundred and seventeen (117) lbs.

The beginning of this month ushered the "rainy season" upon us and as with the first rains the grass always starts, the old mountain sides are now clothed in a fresh spring dress of green. The farmers are commencing to plough again for another crop; in fact, many hundred acres are already ploughed and sown. The superabundant crop of wheat this year has glutted the market, consequently the price rules at a very low figure, and the farmers, as well as everybody else, are growling about "hard times," and the great scarcity of money. Provisions, however, of all kinds, are very plenty, and very cheap, and flour is only $6.50 per barrel, for the very best.

In the gold mining region discoveries have lately been made of new, extensive and very rich gold diggings. They are on the Eastern slope of the Sierra Nevada, and situated on the Eastern fork of Walker's river, lying almost wholly within the boundaries of Utah territory. It is a sterile and bleak country there, with nothing but brush, and a few scrub willows for firewood; - and nothing but rock to build cabins of. Some mining has been done near there for the last three or four years, but this season these new diggings were discovered about four miles South of the old ones, on some small streams and gulches.

The diggings are generally very good, and some claims are paying from ten, to fifty, and even a hundred dollars per day to the man, and only working with rockers, at that. There are only some four hundred miners there at present, owing to the severity of the weather, and the approach of winter, but a great rush will be made there next spring, and farther discoveries will undoubtedly be made, as the surrounding country presents a highly auriferous appearance. These diggings are about three hundred miles from Sacramento and Stockton, and the way to them is to follow the old emigrant roads, over the Sierra Nevada, to Carson Valley, and then it is but a short distance to cross over to Walker's River.

In June last, valuable silver mines were discovered near Washoe Valley, about nine miles West of Carson River, and about half way up the Eastern slope of the Sierra Nevada.

Considerable excitement exists in regard to them, and quite a rush is made to that locality. The discoveries are rather limited at present. The richest vein (the Comstock vein) is from six to twenty inches in width, and was found at the surface of the ground. The ore is very rich, indeed, yielding from five hundred to seven thousand dollars per ton, and it costs from one hundred, to one hundred and fifty dollars per ton, to take it to San Francisco to be melted. Some of it has been shipped to England for that purpose, but arrangements are now being made for melting it at the mines. Shares in this vein are held as high as twenty-five thousand dollars each, and even more; and these mines now bid fair to eclipse the celebrated silver mines of Potosi, in Peru. But no mas ahora. 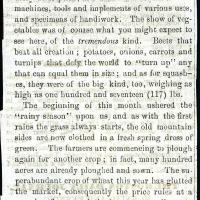