All's well in this quarter just at present, and for the past few weeks few incidents have occurred calculated to disturb California equanimity; but such a state of things can't last long. Somebody must be shot, a town or so must burn up, or else some extra earthquake must give the state a jolly good shaking, just to stir up the people and give us all something to talk about.

We have had good seasonable rains, which have brought the grain crops forward finely, although in some portions of the state the farmers complain of drought. But it seems rather of a difficult operation to get rain enough at any one time to wet the entire state, therefore some parts are more favored than others. The winters of ‘49 and '52 were the winters when the state got well soaked; but such winters as those are now out of fashion, and we don't look for such any more.

We are all now busy haying, and all over the level face of the valley the glittering scythes are at work among the sweet grasses and clover. The mountain sides too are being shorn of their verdant covering of wild oats, esteemed generally as the best hay of all. Mowing machines of various patterns also are laying the grass by the wholesale. They can cut from ten to fifteen acres per day. They charge a dollar or a dollar and a quarter per acre, and the same machines will be used for reaping grain in harvest.

May parties and May festivals were held throughout the state during the first week of this month, and everywhere the little children were specially licensed for a good time generally, and frolicked in joyous glee, together with those of larger growth. The different schools in San Jose and Santa Clara, each had a party or picnic, held in some of the many beautiful groves about here.

A decision of the U.S. Supreme Court, received here by the last mail, changes the aspect of things materially in regard to the land titles in this state. This will have the effect to bring the majority if not all of these perplexed grants back into court again for re-hearing, and now that people have their eyes opened in regard to them, most of them will be puzzled to prove that they have in reality any valid claim at all. Very many of them, indeed, will be thrown out of court as being found fraudulent and good for nothing, even some of those which have been already confirmed by the commissioners and have received their patents. The thieving land-grabbers and bogus grant-holders have had their way full long enough and now, for the first time, the honest actual settlers have an equal show with them.

At San Leandro, on the 22d ult., the jury in the case of Thomas Seale, charged with the murder of Paul Shores, brought in a verdict of "not guilty," and he was accordingly discharged and a "nolle prosequi" was entered in the case of Alexander Robb, his accomplice. This was the second jury, the first one being unable to agree, standing nine for conviction and three for acquittal. Reobb, although indicted equally with Seale for murder, by the Grand Jury, was by some strange working of the cards brought into court as witness for Seale. Of course he did some pretty hard swearing to clear Seale and himself. It would seem from this that in case of murder an accomplice is really necessary, that the two might swear each other clear. People generally don't seem to think it altogether "on the square," but there it is, and the two murderers are again turned loose among society, fully licensed to do the thing over again if they choose. Seale is a rich man and has gone back to his big ranch again, but he keeps out of the way. In that he does well, for it would not be at all surprising, at any time, to hear that he was killed by the relatives or friends of Shores, as Crosby was at San Jose. 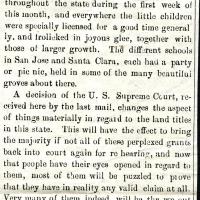