DEAR ROCK: -- This side of Uncle Sam's continent still continues to roll 'round with the balance of the world, and as it ever has been here in California, we rarely lack something to keep up the natural excitability of our excitable population.

Frazer River still continues to attract many of the floating classes of society, and late news from there, as usual, report still farther discoveries of the precious metal. No such "rich strikes," however, are made there, as in our mines, and those icy regions cannot compare at the present time, with the glowing beauties of California spring; but still, if the Frazer country only is rich enough to justify the operation, I know of some thousands of fellows who would sink shafts seventy feet deep, through solid ice, and then "coyote" round underneath just as long as they could “make it pay.” Toil, hardship and danger, are only secondary considerations in gold diggings.

The unsettled condition of the land titles in this State, has now assumed a most portentious and alarming character. Nearly all of the good farming land in the country is covered by immense Spanish grants. Many of them good, the majority of them fraudulent, and few of them clearly defined as to their extent, location, and boundaries, so that thousands of settlers, who a few years ago took up lands and made their homes on what was then believed to be government land, now find their flourishing farms covered by some confounded “grant."

Some three months ago, the Supreme Court decided the "Act for the protection of actual settlers, and to quiet land titles in the State,” to be unconstitutional; and since then, the horde of merciless land speculators and Spanish grant holders, have been coming into collision with the settlers or "squatters," and instuting ejectment suits against them. Serious difficulties have already occurred, and unless the general government takes the matter in hand, there may be some fighting done, for the settlers are everywhere holding meetings and forming leagues, for mutual protection against the land grabbers.

In my last letter, I gave an account of an affray proceeding from one of these land quarrels, which took place near Mountain View, resulting in the death of Paul Shores, and the stabbing of his brother James Shores. Thomas Seale, Samuel J. Crosby, and Alexander Reobb, were the assaulting party. Seale shot Paul Shores with a Derringer pistol, and Crosby handed him a revolver, with which he again shot Shores as he lay upon the ground. Reobb stabbed James Shores. The three murderers remained in prison at San Jose until the 5th ult, when the Grand Jury found true bills of indictment against Seale and Reobb for murder, but no bill against Crosby, who was therefore released, and the others remanded to prison to await their trial. Crosby, however, dared not show himself abroad, but kept himself pretty close in San Jose, for fear of being lynched. The action of the grand jury was unaccountable in any other light than that they were tampered with by money, which no doubt was the case, as Seale and Crosby were monied and influential men, and the plan probably was, that Crosby should be cleared in order that he might act as witness to clear Seale and Reobb. But such a daring attempt to defeat the ends of justice, of course roused the indignation of the people. A mass meeting was held at Mountain View, and a series of resolutions passed, strongly condemning the action of the grand jury, and holding up to public contempt the names of the three members who were the means of Crosby's release, and directly charging them with having sold themselves for money. These three were then placed in effigy in the street, kicked about in the dirt, and spit upon, then they were hung up by the necks and burnt, and afterward their ashes blown off with gunpowder. It was carried out in true western style, and the whole proceedings published in the public newspapers. Crosby did not venture to expose himself much in public, for he well knew that there were many friends of the murdered Paul Shores who would not hesitate to take his life, if they only had the opportunity. Richard Shares also came down from the mines, and swore to avenge his brother Paul's death.

On Tuesday last, the 29th ult., the case of Seale and Reobb was to have been tried in the 3d Judicial District Court at San Jose, at 2 o'clock P.M. I happened to be in town on business, and saw the people gathering in from Mountain View and vicinity, all anxious and deeply interested in the result of this trial. The father and brothers of the murdered man were among them.

About 11 o'clock A.M., I was in the Post Office, when on a sudden a rapid discharge of firearms was heard, and immediately a general rush was made towards the court house, some three or four blocks distant. Of course I did as everybody else does, joined the rush. Crosby lay just across the street from the Court House, on the sidewalk, dead, with no less than five balls through his body, about all of them through his chest.

It seems that the Shores and their friends happened to be near the Court room when Crosby, who had been in to the jail to see his friend Beale, passed along, and as he crossed the street he saw a man whom it is supposed he mistook for Richard Shores, passing along in front of the Court room, and immediately drew his revolver and fired at him. The ball missed him, however, and passed through the front of the building, and lodged in the breast of a young man by the name of Ferguson, who immediately fell and died in about half an hour. He was just down from the mines, and was to have gone home to Missouri by this steamer. Immediately upon Crosby firing this first shot, more than a dozen revolvers came into action and he was shot down. He however fired every shot from his revolver, and had drawn another one, before he was killed. None of his shots took effect except the one which accidentally killed poor Ferguson. That ball passed through a 3 1-2 inch planking, and was from one of Colt's Navy size revolvers.

There were many that took part in the shooting, but Richard Shores was the foremost. No arrests were made, but a day or two afterwards the Shores gave themselves up, and yesterday were bound over in the sum of $1000 to appear before the Court of Sessions. This is however, a mere matter of form, and nothing will be done with them. Seale and Reobb were granted a change of venues to Alameda County for trial, which was just, for they surely could not have an impartial trial here in this county. But- 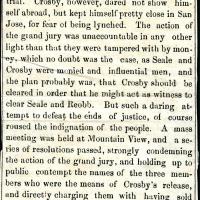