The dusty, sweating, weary toil of harvest being over, and a good opportunity presenting itself to me for a pleasant cruise about the country for a week or so, I accepted the kind invitation of my valued friend Fred. W. Lucas - who had come to pay me a visit - accompanied by a friend of his - and a fine morning, bright and early saw three of us tightly wedged into a borrowed buggy, propelled by a stout ambitious horse - also borrowed - Having but just returned with the pleasing incidents of my visit still fresh on my mind, perhaps a light sketch of it may not be amiss.

We had twenty miles to go but the road was good and our gallant steed I took us along at a rattling pace - We passed through the town of Alviso at the head of the Bay, and were soon among the broad rich acres of Alameda county. The crops were mostly gathered in, but we passed many fields of grain that were just being harvested. At one place we stopped to see a "clipper," or "header” at work. This ma.hine cuts a swarth ten feet in width, but only clips off the heads of the grain, leaving the straw standing. From the cutting knives the grain passed on a broad, leather belt up a wide spout and over into a big square box which is drawn by the side of the machine for the purpose. It took four horses to propel the machine, and one man drove steers and managed the whole concern. As fast as the box became full, it was driven off, and another one took its place. The threshing machine - a ten horse Pitts separator - stood at a convenient point in the field, and the boxes - of which there were three drawn by two horses - unloaded directly into it. By this method of operating, from twenty to thirty acres or more are harvested in a day.

Our road wound round through the broad side farming lands that skirt the shores of San Francisco Bay, and noon found us at the old Mission of San Jose, where we stopped, had our brave old horse regaled with a feed of good barley and hay, and after partaking of a substantial meal of corned beef, cheese, pie and water, at a hotel, we took a survey of the place-

The Mission of San Jose is very prettily located upon a rising ground among the low hills at the foot of the big mountains of the Contra Costa range, and contains some fifty houses, built mostly in the old Spanish style with adobe walls, and red tiled roofs. The broad street, running through the town, with the whitewashed houses on each side presented quite a refreshing air of neatness for a Spanish town, this is probably owing mostly to the presence of the Anglo Saxon race, with the march of improvement. Many of the old residents still remain here, but the enterprise and business elements of the place, are American ­ This Mission was founded by the Jesuits, in 1797, and their massive old church, the largest building in the town still opens its portals as of old, to the religious Catholic masses, or to the repentant miner seeking the consolation of the confessional - Just back of the church, is the old Mission orchard, and it being the season for ripe fruit, we entered, and made purchase of a sufficiency of peaches, pears &c to satisfy our appetite in that line - All kinds of fruit trees were there, even to figs and olives, and being situated on a fine slope, the whole orchard and vineyards are irrigated by a stream coming down from the mountain ravines - There are other fine orchards and vineyards about here, but we did not find time to visit them.

We harnessed up our faithful horse-flesh, ourselves into that contracted buggy, and moved on. In about two miles we came to where there was a large "harvester" at work, so we got out to see it, as it is something new here in California. There are but two of them as yet in this valley at work. They cut, thresh, clean and sack up the grain, ready for market, leaving the crop all sacked up, standing round the field. It is simply a reaper and thresher combined. Mr. Strong, the proprietor of the machine, built it himself, in San Francisco & and he explained to us the working of it. We also each of us took a turn at riding on the machine as it went round the field, to observe the working of the various parts. We were very much pleased with it, and believe that with some few little improvements it must supersede in a great measure, all other modes of harvesting. It takes two horses to haul it, two drivers, one man to regulate the height of the knives in cutting, be means of a regulating wheel for that purpose, and one man to tend to the sacking department. They can harvest barley at the rate of nearly two bushels per minute.

Nothing more of note interrupted our progress, and at 4 o'clock PM, we arrived at our place of destination, near the little country town of Centreville, on the ranch of Don Augustin Aliviso, one of the old Spanish residents. The ranch rejoices in the name of "Rancho do los Sierritos de Jesus Maria," and includes some three or four square leagues of fine farming & grazing land. On a portion of this ranch my friend Lucas raised wheat and potatoes this year, and his crop of wheat turned off fifty bushels to the acre - a very heavy yield - You of course recollect Lucas as do most Plymouth boys. He has also a ranch in the mountains, a few miles from the Mission San Jose where he has a few hundred head of sheep, and some cattle, horses, &c.

On another portion of the Alviso ranch, Mr. Jocelyn had a large crop of wheat, averaging sixty bushels to the acre. In fact all the land about there is excellent wheat land, and turns off heavy crops. Nathan Layell esq. - of the firm of Layell, Perkins, &c, Bridgewater - has also a fine farm of two hundred acres, prettily located, in the vicinity. About two miles below, is Mayhew Landing, where all the farmers take their grain, for shipment to San Francisco. It is situated at the head of a slough, or creek of some five miles in length that makes its winding way through the broad salt marsh, into the Bay. Small sloops and schooners only can come up here, owing to the shallowness of the water. Capt Jonathan Mayhew - a Nantucket man, here does a brisk business in the freighting line. He has also large warehouses where he stores grain for the farmers, so that they can have it shipped to market whenever the price suits.

During the winter season the marshes and all the little creeks and inlets literally swarm with wild geese and ducks, affording a lucrative chance for shooting, for the city market. The Capt made fifteen hundred dollars winter before last, at that business. He understands the thing exactly, and of course knows when and where to go, to get the best shots - And then too he has the tools to do with. One large double barrelled gun which he has, is much the largest I ever saw. It is very heavy, and has such a tremendous bore, that it takes about a handful of shot to each charge. This weapon at seventy-five or a hundred yards is bound to kill, or cripple a very large number of fowls –

The notable shots that Capt Mayhew has made with shot gun are often spoken of, and to a novice would seem almost incredible. He once shot one hundred and forty two ducks at one shot of both barrels, and with a single barrel, he shot 104 and at another time 102 ducks. Pretty tall shooting, you think, well it was. One morning winter before last, as the sloop Hector, Capt Adoniram Bates, was leaving the landing, with freight for San Francisco, Capt Mayhew started out with his big gun, shot nine dozen ducks and geese, intercepted the sloop some two miles down the crooked slough, and put the game on board for the San Francisco market. Such luck as that for a mornings work is hard to beat; and such shooting is indeed slaughter most fowl.

Mr. Layell contributed much to the pleasure of my visit, by taking me around through the country in his buggy, the cares of business giving way to the rites of hospitality. Among other places that we visited, was the famous Warm Sulphur Springs situated a few miles south of the Mission in a romantic little valley, at the foot of the mountain. It is a favorite resort for invalids and pleasure seekers and here too, it is said that Major Gen Wook did some pretty responsible "poker" playing when in California. The principal building as a large two story house for the accommodation of the boards. Here, taking advantage of the fine bathing facilities, we enjoyed a luxurious bath in the warm sulphur water. Beautiful groves, walks and flower gardens surround the establishment and in the open space in front, a splendid fountain plays in a large circular basin of masonry. In the rear of the house and gushing directly from the base of the lofty mountain is the noted spring, the waters of which are about blood warm, and of a somewhat taste being highly impregnated with sulphur; a pipe from this spring supplies the fountain in front of the house.

Amid the pleasures of my visit a week whirled rapidly round, and brought me back to my old "stamping ground” whence I write, but as this fills my sheet, I must bid you 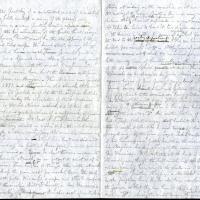