“Should auld acquaintance be forgot?”

Many months have floated down the river time, since your old correspondent had the pleasure of communication with you, yet there are perhaps among your many readers, those who still remember "Ben Bolt," and give him “a place in their memory."

And during those months, California has with the balance of the world, "wagged on," and "rolled on," characteristically distinguished occasionally by some great horseracing, a street fight, a small earthquake, a mob or so, a duel, some suicides, some murders, news of "rich strikes" in the gold diggings, and other inflammable elements, which go to help fill up the mind of our varied and stirring population.

But at length, a new "golden fleece" has been found. A rival El Dorado has been discovered in the cold regions of the northern hemisphere. The bed of Frazer river, away up in the British Possessions, is reputed to be teeming with the yellow gold. Only some three or four months ago the news came. It was not whispered about among a few, but at once appeared in all the daily papers, to feast the eyes of numerous implicit believers. All the old steamers were at once hauled in alongside the wharves, and placards round the streets, and advertisements announced to the gaping public, that the "splendid and commodious steamship So-and-so, would take her place in the regular line to sail direct for the newly discovered gold mines on Frazer river. For freight or passage, apply on board."

The travelling, enterprising public were already packing up, and away steamed the old coffin hulks, loaded to the guards with freight, and crowded with passengers, cheering as they left, in answer to the loud huzzas of the crowds on the wharves. No one seemed to "care a cuss" how they got to "Frazer," so long as they got there. But some of the old steamers returned, disabled after a short absence. The passengers however, just philosophically got aboard of some of the other Frazer "packets," and took a fresh start. Miraculous good luck seemed to attend emigrants to the new gold region, for but few lives were lost.

All was bustle and excitement throughout the state. The miners packed up, left their houses of logs, and down the river they came, to San Francisco, en route for the "new diggings." - Farmers, merchants, mechanics, and many families, joined in the rush; pretty nearly everybody became more or less touched with the “Frazer fever." Even Mr. Bolt began to covet the piles of treasure, that they told him constituted the bed of the immortal "Frazer,” in the realms of the British Lion; but like many others, he couldn't go there, because of his crop of grain, which he must needs stay and harvest. Many an old familiar face disappeared under the prevailing epidemic, and in a short time, it was estimated that over thirty thousand had left California.

Soon, very soon, there came rather discouraging accounts from those who had gone first. The river was too high &c. That, however, was nothing new, for with the very first news of the gold discovery, the river was stated to be "too high,” and no gold of any consequence was to be found, except in the bed of the stream, and the overflowed bars. And no one had got a sight at the gold, except a few favored ones, who were just permitted to get a look at the precious metal, when the swollen torrents, from the melting snows on the mountains, caused the river to rise, and overflow all chance at the fabulously immense riches which were now just known to exist there. "Gold Lake,” "Gold Bluff,” “Kern river," and all the other gold excitements and humbugs, that led people so wildly astray in times past, faded into insignificance beside this golden dream.

The first emigrants wrote back to their friends not to come, stating their realization of represented difficulties, &c., but still the rush continued. All wanted to be there, on hand for the first chances. Victoria, on Vancouver’s Island, and Whatcom, a new city sprung up on Bellingham Bay, were the two neighboring points to the golden river, and thither congregated the adventurous multitudes. Thousands had just enough to pay their passage, and landed destitute, in a strange, unsettled country, were they could get no means of earning even their necessary food. They were still many rough and rugged miles from the golden treasure for which they came, and the aforesaid treasure was decidedly not to be got at. Thousands of them encamped round the shores of Bellingham Bay, subsisting on muscles, clams, &c., each one "staking off his claim," of a specified number of square yards, or rods, of shellfish. Quite a jolly idea, too. Just imagine the hungry miner, waiting for the tide to fall, so that he could get at his "regular grub." Imagine also, the happiness of the "clams at high water."

Oh, but it brings to my mind those well remembered Saturday afternoons, when with one or two of my chosen schoolmates, I used to so enjoy a "clam-bake," or a kettle of boiled clams, on the shore of Old Plymouth harbor. A few potatoes also, boiled with the clams, used to taste so nice to us, although I am sure I never used to like them at the dinner table.

And then if we could only steal a boat and scull round the wharves awhile, that completed our happiness. Recollections of the happy days when "we children used to swim," has however no connection with the Frazer river subject.

The excitement has probably died away. Many have returned, most heartily glad to get home to California once more, but there are still a few going, and plenty of freight of all kinds leaves for Victoria and Whatcom. Now whether this great discovery of gold in the British Possessions will all turn out to be a grand humbug or not, we shall soon know. It is certain that gold is there, but how much, is the question. - The renowned river is said to be falling fast, and the cold weather will soon freeze the mountain snows and torrents, so that for a few months the river will be at its lowest stage. A good trail has at last been discovered, and opened through the otherwise impassable mountains, by which the mines are comparatively easy of access, and the dangers of the passage up the rapid river in canoes, and the consequent loss of life and property avoided. Gold has also been discovered on Thompson river, and other tributaries of Frazer river.

I read a letter from an old acquaintance of mine yesterday. It was dated the 5th of this month. He was on board the old steamer “Sea Bird" of San Francisco, hard and fast aground on Frazer river just below Fort Hope. He was getting eighteen dollars per day, helping to get the steamer off.

He says the river is falling fast, and people are hurrying up to the mines. Victoria and Whatcom would soon be deserted by their floating population. He thinks now is the time to go to the mines, and he fully believes he can do better in that country than he ever could in California. He writes in the same cheerful, hopeful strain as used to characterize many of the letters from California in the early days. I hope for his sake as well as for the sake of many other friends who have gone thither, that they may fully realize their golden anticipations. Time will show.

Meanwhile, the gold mines in this state have not given out. They are in fact inexhaustible, at least for a hundred years. "New diggings" are of frequent discovery, and many secret stores of the precious metal still remain to be prizes to the persevering.

But, none but strong, able bodied men can expect any success in the mines, for the gold has to be sought now deep in the bowels of the earth, my means of long tunnels and deep shafts. The surface diggings still continue to pay, but it takes good experienced miners, together with all the most modern improvements, and implements, which, by dint of perseverance, and strong arms, make the old surface diggings still pay to work over. 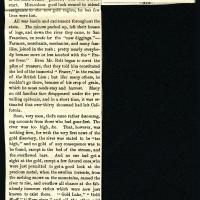