Among the emigrants from the different parts of the States, which help to make up the population of California, it is quite amusing to note the little peculiarities of habits, looks, and speech, which distinguish the natives of each particular State or portion of the Union from each other.

The "Southerner" is not the man who does the hardest work here. He generally prefers some method of getting along in the world which has not much of manual labor attached to it; - an easy mercantile life, offices in the county, or State service, or something of that sort is just what suits him. The great fillibuster - Walker - is a southerner, and most of those who are with him, or sympathise with him, are southerners. They imagined Nicaragua to be their land of promise, and easily to be acquired; a land of milk and honey, and abounding in rich lands, where the "Domestic institution" of slavery could be introduced; and there on their rich plantations, with all the comforts of a southern home around them, they would lead a happy, comfortable, southern life, and no meddling "down-east abolitionists" to bother them. Thus far they have been somewhat disappointed.

The "Yankee" is quite another individual. Ever ready, active, energetic, and intelligent, with the desire to make money always uppermost, he leaves no stone unturned to effect his object. If there is any great enterprise gotten up, such as a railroad, an express line branching to all parts of the country, it grand combination of stage lines, or steamboat routes; to facilitate public travel, and at the same time to draw dollars plentifully from the pockets of the public, you may be sure that some Maine or Massachusetts men are at the bottom of it.

All the rowdy butchers, rampant fire companies, shoulder-strikers and b'hoys generally, are from New York, although at the same time, as talented and enterprising men come from there, .as from any other State, yet there always seemed to me to be a sort of New York-ishness about a native of that State, not easily to be mistaken.

Thus each State is distinguished by the manners, customs, and peculiarities of its sons. But it is not often that a particular county becomes thus celebrated. Who is there in California who does not know in what part of the world "Pike County" is, and who has not seen a "Pike?" Pike County, Missouri, will be ever celebrated in the annals of the settlement of California. Whether the people of that immortal county are more migrating in their habits, or were more easily excited by the news of the great gold discovery here, than other people, I cannot say; but certain it is, that in '49 and '50, anyone meeting a train of emigrants, just arriving into the country across the Plains, and asking them where they were from, the almost invariable answer was "Pike County." It was unnecessary to mention the State, for "Missouri" was as a matter of course understood. In fact some of the least learned among them are under the impression that Missouri is part of Pike County; and they have some grounds for believing so, as all the Missourians here now-a-days are included in the designation of "Pikes."

Generally speaking, the Pikes are, as a class, the most illiterate, coarse, ignorant, and rough set of people we have among us. The most of them follow mining, or farming, and are not always considered very agreeable neighbors. There are of course some fine people among them as are to be found anywhere; but the generality of them are as I have described.

The numerous daughters of Pike blooming in this golden land, go far towards making up for the lack of personal attractions on the part of the male Pikes, and had they not such big feet I could perhaps think some of them pretty. But such feet; - and occupying such an extent of sole leather - why, they are as large as men's feet. I must confess to an amiable weakness in favor of a pretty little foot, and would consider a reigning belle, with ever so pretty a face, comparatively homely, if she wore long dresses to hide a pair of big ugly feet. Therefore it is that we may not consider the Pike County damsels as excelling the Yankee girls in personal beauty. To use their classic style of speech, they have a "right smart chance" of a foot.

Although ignorant, rude, and in some things perhaps disagreeable, yet in many points, Pike is - as Micawber would say - "a good fellow." Ever the pioneer in the advance of civilization extending westward, it is by such as him, that forests are cleared, and the foundations of cities laid. The race of the red man fades away before him, and the lofty old trees which shade the ancient hunting grounds, fall before the ringing axe of the Western emigrant. As a rifle shot, Pike can hardly be beat; and were an expedition organized to go out into the Indian country, to fight the savage foe in his own stronghold, I would infinitely prefer Pike with his rude manners, and trusty rifle, to a legion of city bucks, and those who think themselves the very flowers of society.

Pike is universally ridiculed, and looked down upon by many, who, were they "weighed in the balance," might be themselves found wanting; yet he possesses qualities which do honor to manhood; and although cute Yankees see plenty to ridicule, and make fun of in Pike, yet rude in speech, and rough in manners as he may be, and profoundly ignorant in regard to book learning, and things that to us are familiar, in the mysteries of woodcraft, and things which fall under the observation of the pioneer, there be many points in which "Pike" can teach "Yankee." Yes; and sometimes Pike stumbles into the performances of a "cute Yankee trick," should occasion require.

In the early days of '47 there were no regular pilots about San Francisco bay, and ships had to find their way into port, or across the bays and up the rivers, as best they could; and ship captains were willing to give almost any price for some one who had an inkling as to where the true channel lay, and could pilot them up the rivers. I recollect we had to pay an individual a good round sum - $400 I think - to pilot our ship up as far as the mouth of the San Joaquin river - about fifty miles - where he left us, stuck hard and fast in the mud.

It so happened that one day an anxious captain was about the landing at Clark's point , inquiring for some one to pilot his ship up to Sacramento , and offering plenty of money; but no one seemed willing to take the responsibility - At length he was accosted by a gentleman dressed in a blue blanket coat, a pair of butternut pants, and an old felt hat, who "reckoned he was the man for him," and could "jest take his boat anywhar he'd like to go." The captain asked him if he was thoroughly acquainted with the navigation of the Sacramento, and he "reckoned he was;" he'd "been thar," - he had. So there was no more to say; his services were engaged forthwith.

Now this gentleman had just arrived across the Plains from Pike, some two weeks previously, and had come down on the last "scow" from Sacramento, thus he did know something about where the river was; and hearing the captain inquiring for a pilot, thought it would be a most desirable chance for making a "raise," and besides that, he wanted to go up to Sacramento, and would rather pocket money, than pay it out for his passage up.

The gallant ship was soon underweigh, and spreading her snowy pinions to the fresh sea breeze. The bays of San Francisco, and San Pablo were safely crossed, our "pilot" carefully abstaining from giving orders, and sensibly contenting himself by hinting to the captain as to the right direction to go in. Thus he got along very well, until they had passed up through the straits of Carquinez, and were crossing Suisun bay, towards the mouth of the river; and as this bay is remarkable for shoals, Pike was put to his trumps. He however held his tongue, and keeping a sharp eye on the landmarks, trusted to his luck.

Presently the captain touched him on the elbow, saying "pilot isn't it rather shoal water here?" Pike "reckoned it was rayther shoal"- indeed the water had assumed a dirty green color, indicating shoals - and thinking that if they could only get into the blue water to the left they would be "all right," he proceeded to give orders to that effect. He turned to speak to the captain, but he had gone forward to look out ahead. There was no time to lose, so turning to the man at the wheel, and endeavoring to look as pilot-ish as possible, Pike sung out : "l say stranger, let her come haw a little." As a matter of course, such an order produced a roar of laughter from all hands. It was the ruination of Pike; and even as they were laughing, a heavy grating was felt; the ship gave a surge and a thump, and directly was fast aground. The captain swore terribly, but there was no help for it. Pike took the curses and the ridicule like a philosopher. The next day they made out to get off the shoal, and by sounding and feeling their way along, they managed to get safely into the mouth of the river, and by good management, aided by what little Pike knew, they contrived in about a week to work the ship safely up to Sacramento. Here in consideration of his valuable services Pike received fifty dollars, as a present from the captain. He at once got all hands ashore - cook and all - and "stood treat ;" after which he was seen walking off up J street, swaying himself from side to side in a truly nautical manner, and appearing to feel that he was the greatest pilot on the Pacific coast. 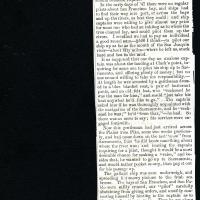