Again has California been shaken, and the timid portion of the community frightened, by the shock of an earthquake. About 8 o'clock on the morning of the 9th inst. we experienced two distinct shocks. The first one was much the strongest, and lasted about four minutes, I should judge. No noise accompanied it, but it was a slow, steady, rocking motion, giving one a peculiarly dizzy sensation, and the oscillations appeared to be about S. E. and N. W. In San Francisco door bells were rung, some brick walls were cracked, a small house which stood up on stilts was thrown down, and many people were much frightened, and ran out into the streets. These small shakings seem to be becoming fashion able in this peculiar portion of Uncle Sam's dominions, but as they do little or no damage, they are not much to be feared.

Among the many peculiarities of this country, I would like to write a few words on a somewhat delicate subject, and that is the vermin with which all who reside in California become more or less familiar in spite of themselves. I believe no one ever came here that did not soon discover the fact that fleas were plenty and more easily acquired than money, and indeed cling to a person longer and far more pertinaciously than dollars . They are to be found everywhere, in the wigwam of the Indian and in the mansions of the wealthy, in the saloons, in the hotels, in the miner's cabin; everything and everybody has fleas. The proudest merchant or the handsomest lady that walks the streets of San Francisco are victims alike to these blood-thirsty, skipping little rascals. Everybody has to scratch. The extreme of cleanliness is not proof against them; they are natural to the climate and country and will insinuate themselves where they please. They are a pest and a nuisance, but they are nevertheless a "fixed fact" and cannot be avoided.

In the early times of the gold excitement, when everybody was travelling hither and thither throughout the country in search of riches, they found that the fleas followed them, but they also found another, more quiet species of vermin, and that was lice. In all the hotels and lodging houses were long tiers of "bunks" for the accommodation of travellers, and the bedding consisted of straw mattresses, and woolen blankets. Every night a new lot of travellers occupied these beds, and as in these days but little attention was paid to personal appearance or cleanliness, the blankets soon abounded in varieties of the vermin. The many ships arriving daily, with their swarms of passengers from all parts of the globe, brought additional vermin. In the mines the Indians kept up the supply, for lice are peculiarly natural to a Digger Indian, as fleas are to a dog; and the Spanish population, too, generally, did not lack much for the commodity, so that, what between shipping them here to add to the plentiful stock already on hand, the mining, speculative, travelling public, soon became altogether a lousy public. It was almost considered a sign of good health to have plenty of lice, and to accuse your neighbor of being "lousy" was merely "the pot calling the kettle black."

An anecdote is told of an individual in Stockton who stood one morning exercising his back in a peculiar manner against the corner of the "EI Dorado," when an acquaintance, meeting him, said: "What's the matter Jim, fleas?" - "Fleas? no!" replied Jim, "d--n you, do you think I'm a dog? fleas? no; lice!" Cleanliness and comfort, among the white population at least, have caused these indications of filth to pass away, to be spoken of as connected with former times, but the Spaniards and the Indians, not being progressive in that respect, their natural vermin still clings to them. Well, this is rather of a scaly subject for a newspaper letter, but as it's all true, I'll excuse it on that ground. Ask any "old Californian" if it is not so.

The mosquitoes - that extremely annoying little insect, - are most plentiful on the rivers, and especially the San Joaquin and Sacramento, where clouds of them, in the warm season, eternally hover over the still waters or infest the tules and rank grass that crown the low banks and bottom lands along the rivers and sloughs, ever hungry, waiting for a victim, and ready to pounce in blood-thirsty myriads upon man or beast. In the spring of '50, I was for a short time "mate" of the little sloop "Alia Clinton." The only person besides myself was Capt. F--, and consequently we constituted both "crew" and "cook." We were engaged in the freighting business between San Francisco and Stockton, and in our trips up and down the San Joaquin we became thoroughly acquainted with the mosquito and its general disposition to "bite." From the time we entered the mouth of the river until we had been up to Stockton and back, we fought mosquitoes day and night; we killed them by millions, "but the cry was still they come." They came with a rush and always lit stinger end first; a blotch followed the sting, and blotch followed blotch, until a river boatman could be easily distinguished by the "mosquito bites" on his face and hands. - There was no such thing as sleeping comfort able, where they were. We rolled ourselves up in blankets, but it was no use; the mosquitoes crawled through like so many fleas. Hard work and exposure under the boiling sun by day, and to the mosquito, miasma and damps of the river air by night, was more than I could stand. I had to quit boating, and a long and severe siege of the "fever and ague" justified me in the conclusion that I was not cut out for a "fresh-water sailor," or destined to become celebrated in the annals of river navigation.

In San Francisco and other cities, myriads of "rats" find their abode. Under the planking of the streets, in the great warehouses, in the flimsy wooden shanties, in the old hulks, around the rotten and filthy wharves and docks, they breed and swarm in endless profusion. Passing along the streets of San Francisco of an evening, a stranger would be surprised to see the droves of rats running about, feeding upon the offal and hardly caring to run out of one's way. It is of no use killing them, for that does not thin them out any, and an old resident of San Francisco, seeing a man chasing and trying to kill the rats in the streets evenings, knows at once that he is a stranger in the city and probably just down from the mines. They were pretty well killed out, for a time, by the great fires which used so to devastate and destroy that thriving city, but in a few months they were plentier than ever. I think the many long-tailed children of the Celestial Empire who reside in San Francisco must have a happy time of it, and can defy starvation where rats are so plenty. I never passed one of the Chinese butcher shops on Sacramento street and viewed the various shaped articles of the "sassinger" order, without wondering how many carcasses of defunct rats it took to make those queer looking sausage.

Whoever can read Ben Bolt’s letter this week, without scratching, will do to live in California, and will never be troubled with backbiters. 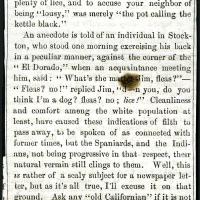