A "happy new year" to you. The old year has passed away, with its cares and vexations, to keep company with the many that have gone before it to the realms of the past. Let us look forward with hopeful hearts to brighter, happier days; hoping on, and hoping ever, that the trials and storms of the future may pass over us lightly. Adieu to the old year. Adieu to the events and troubles of the past, and trust in Providence for a happy future.

Thus far the winter has been mild. We have seen some frost and cold weather it is true, and ice has formed a quarter of an inch thick of a night, but the rains have held off so, that the ground has not wet down deep enough to plough until now. But we have had several good storms of rain within the last few days which has gladdened the hearts of the farming community, and everybody are actively engaged ploughing, and putting in their grain crops. The ranges of mountains which enclose this valley are white with snow, and the copious showers and strong south-east winds betoken the "setting in" of the rainy season. The farmers are all hopefully looking forward to a better season than was the last, and hope to make up for the short crops of the last harvest.

In my last letter, I spoke of gambling, as it existed in San Francisco, and other cities. In the towns and villages of the gold region, before the Act was passed by the Legislature, suppressing public gambling, the gaming table with its piles of money, was to be seen in all the gambling and drinking houses, and even in the grocery stores in retired parts of the diggings, gamblers would have their tables in a corner, and they generally did a brisk business evenings, and Sundays, with the miners and others who resorted there. Sunday has ever been the grand holiday throughout California. Among the Spanish portion of the community, Sunday was always the chosen day for a bull fight, horserace, and such like festivities. It has been accounted sinful to work at any manual labor on that holy day, and the miner looks with honest indignation upon his fellow, who desecrates the day of rest by wielding the pick and shovel when he should be washing his dirty clothing, or take his gun and go out on a day's hunt. They think: bah! a man should have more principle and regard for the good opinion of others than to "work Sundays;" and money made on that day will do him no good whatever, but will go to some bad use.

The miner generally does his principal "trading" Sundays. He washes the mud off his boots, puts on a clean shirt - if he has one - and his best hat, and goes "to town," or else to "the store" in the vicinity, where he purchases his various articles in the provision line, and whatever other things he needs, and then - these business transactions being concluded if he is a person inclined to get drunk, he invariably does so and along towards sunset might be seen having a most unhappy time lugging his provisions home over the rocks and across the ravines. If he does not get drunk, he perhaps sits down at the gaming table in the corner, and bucks off what money he has about him at "Monte," or again perhaps he sits down with a "friend," and has a comfortable little game of "Poker," and concludes the day by "packing" his provisions home on his back, and "nary red" in his pockets. But although dissipation and drunkenness stalk publicly through the mines and many a poor fellow easily led away becomes a victim, yet let not this be taken by any means as a type of the California miner. Thank Heaven, they are not all given to drunkenness and gambling; and God speed the glorious Era, the golden Era, when these vices at last may be unknown among them.

Among the many "characters," of which it was my fortune to be cognizant in the mines, was one young gentleman of African lineage, Ethiopian parentage, sable complexion and his name was Pete Sykes. The first I saw of Pete, was in the fall of 1850, in Stockton, and he was then one of the proprietors of the "Lone Star Restaurant" there; and he was doing a fine business. Pete used to sport a gold watch and dress gay. He was a splendid cook, and indeed was hard to beat in that line, but the best of us have our faults, and Pete's grand failing was a strong inclination to venture his private funds on the game of "Monte," and other chance investments. Gambling was the ruin of Pete Sykes. While he had plenty of money coming in he gambled freely, and the professional blacklegs bled him freely, until at last they won his last dollar and he lost his share in the Restaurant.

Pete Sykes was "broke;" and yet he had his "stove" left; his stove that he so much bragged on, and would not part with by any means. With that stove, Pete considered himself "all right" in the culinary department; and he was. He soon got a chance as cook in a hotel, and Pete and his stove drew plenty of customers to the house; but alas! his hard-earned wages in due course of time adorned the Monte banks; or some of his sable brethren would fleece him at "Poker." Of this last game he was very fond, and would improve his spare time as often as he could get anyone to play with; frequently playing all night; until at last, the landlord of the hotel was obliged to discharge him. Of course the stove went with him, for Pete Sykes considered that stove as part and parcel of himself. He was a jolly looking darkey, black as a crow; his wool curling tight on his bullet shaped cranium, and his two lips rolled naturally away from each other, displaying in a most happy grin, as fine a set of dazzling white teeth as ever adorned the physiognomy of anyone.

The last I saw of Pete Sykes, he was at Mokelumne Hill, cooking in the "Eagle Restaurant" there. He was the same good humored, jolly, gambling darkey as ever, and had his usual luck in getting clear of his surplus wages. Ever ready for "a game of Poker" with his colored brethren, and often getting "broke," yet he never could be induced to risk his stove, even when his last dollar was bet and lost.

But one unlucky evening, an eventful evening in the history of Pete Sykes and his stove, he sat playing "Poker" with another darkey. Pete's pocket had bled freely, and his excitement on this important occasion was aided by a horn or so of "old Monongahela." Hand after hand was dealt, and Pete's treasury was fast becoming exhausted. The last hand was dealt; and Pete held "four kings." His eyes glistened. - He went two dollars "better." He trembled with joy and excitement. He "had de nigger at last." He went ten dollars "better." He put up his last dollar. He paused. "Four kings" was a hand that could hardly be beat. He was desperate. Looking the other darkey full in the face, he said with a most reckless tone of voice: - "Nigger, I goes yer a jint o' stove-pipe better." Pete Sykes had broken the ice. - He was "in for it." He went "anudder jint 0' stove-pipe better," and yet "anudder." He went "de lass jint;" and jumping up in his seat, he roared out: "Nigger I goes yer de whole stove better. By gorry dis am Pete Sykes, last chance in California. I goes der whole stove." "Pete Sykes," said his black antagonist, "Pete, I sees yer and sizes yer pile;" and at the same time he threw his hand upon the table, revealing to the astonished eyes of Pete "four aces;" the only hand in the whole pack that could beat his. He dashed his "four kings" down upon the floor, and strode forth from the room a sad-hearted, but not wiser, nigger. Poor Pete Sykes. His stove was gone, and he was indeed "broke." 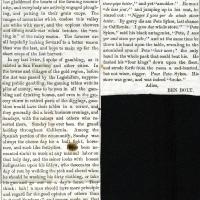