Among the many vices peculiar to California, that of Gambling stands first and foremost. From the very first commencement of the rush and excitement, consequent upon the discovery of the gold, gambling, both publicly and privately, had been carried on to a wholesale extent, throughout the entire length and breadth of this State. In the early times of the gold excitement, merchants, miners, and the public generally, all seemed inclined to try their luck, and hundreds of thousands of dollars nightly changed hands at the gaming table. Laws regulating and suppressing public gambling had not been enacted, and in the fast cities and towns, large saloons were to be found, opening wide their doors upon the public street, and the many gaming tables groaning beneath bright piles of silver and glittering gold, stood temptingly displayed to induce the passers by, to enter the portals of the gambling house, and risk their money at some of the many games of chance, so plausible, set forth to entrap the unwary.

The principle saloons were rendered more attractive by having fine bands of music playing both day and night and along the walls were suspended fine picture s; many of them of a rather voluptuous character. The main source of profit to the proprietor of the saloon, was the bar, which occupied one side of the room and was generally a splendid affair, richly set off with cut glass decanters, of beautiful colors and patterns and a whole army of bottles of costly wines, liquors and syrups, rising one tier above another, while in the background, against the wall, hung large and costly mirrors, in splendid gilt frames. - The long counter was generally surmounted by marble slabs, and behind it stood spruce, active and intelligent bar traders, constantly busy at mixing and serving up the many and various drinks continually called for by the ever changing, ever thirsting crowd before them. At frequent intervals, the merry tinkle of a small bell would be heard, proceeding from some one or other of the gaming tables, announcing that the proprietor of that particular "bank" was desirous of "treating" his "customers." The bell summoned an active waiter, who at once came and received his orders for various drinks, from the individuals who stood around the table, betting at the game. Hurrying to the bar he would soon return with the liquors called for, arranged on a salver, and serve them to those who wished. It was good policy on the part of the "dealer" to thus "treat" his victims as often as they wished, as, of course, a man under the influence of liquor would bet his money much more recklessly than one who was not.

In all the games, there was a large percentage in favor of the dealer, and those who bet their money at the game, generally lost. Occasionally they would be allowed to win a little, but this was only to lead them on, that they might be the more deeply and effectually fleeced. - Sometimes indeed, Fortune would favor the intended victim, and a bank perhaps be "broke" by some individual who had a most extraordinary run of luck; but this was seldom; although at all times most marvelous stories could be heard of such and such a bank having got "broke" by some lucky fellow. These stories were industriously circulated by the professional blacklegs, to encourage greenhorns to "try their luck."

Many who were in San Francisco in '49 and '50, on reading this sketch, may readily call to mind the principle gambling saloon - the "El Dorado" - at the foot of the Plaza. Day and night it was filled with a gambling, curious crowd. - From the orchestra, a fine band of music discoursed delightful music, and fifty thousand dollars on one gambling table, could be seen there at any time. "Monte," "Roulette," "Faro," and numerous other games were here in full operation, and a man with any money at all, could take his choice as to which game he would lose it on. The most common and familiar game played, "Monte" - a Mexican game - and at all hours could be heard the dealer of the game, as he shouted at the top of his voice, "Come down gentlemen" - "Here's your chance for a pile" - "Pungle her down" - "Ace and King" - "Jack in the door," and such like expressions, connected with the game.

The principle gambling saloon in Stockton in '49 was owned by Mr. Rand a Methodist minister, from Cape May. He owned three or four of the Monte banks in his house and dealt Faro himself. He was a very quiet, respectable, fine looking man, and no one seeing him on the street, would have thought him a gambler. He left for home in the spring of '50, and was the proprietor of “more gold than he could lift. In one corner of this saloon, near the door, sat a boy, with dice box in hand, presiding over a table with some Alphabetical letters and a large bird painted on it, and of an evening his shouts could be heard above all the other gamblers, as he sung out "Come down gentlemen." "Here's the game called Chuckerluck; the less you put down, the more you pick up you're sure to win and can't lose." His favorite expression was, "Buzzard bird, by chance, first time since supper." The idea was, that when the dice were shaken, if the "Buzzard bird" appeared uppermost, all the money which the anxious individuals betting at the game, had deposited upon various letters, was hopelessly confiscated to, and for the benefit of him of the dice box; and as the above mentioned favorite expression, by means of loaded dice was made to occur about every ten or fifteen minutes, we may suppose that the young man's word was not to be taken at all times.

I have given but a brief sketch of gambling as it was in California, and what more I would write on that subject I will reserve for my next letter. Wholesome statutes have been enacted, suppressing public gambling, and the "El Dorado," and the other gambling hells, are among things that were; but, nevertheless gambling is still carried on in private places to a great extent. Many instances have been known of miners just down from the mines, betting their entire "pile" on a single card and wining; but was that money, made by gambling, as much prized, or as justly obtained, as that which was earned by honest toil in the mines? What honest man will say that a dollar fairly earned by the sweat of his brow, is not worth a dozen won at the gambling table? 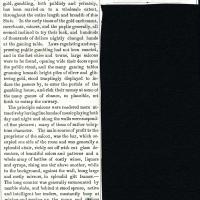