In my last letter, I related some stories of the grizzly bear, the animal so familiarly spoken of in connection with California and the Sierra Nevada mountains, and as anecdotes of the habits and peculiarities of the beast form a theme which may not be uninteresting to some of your readers. I will touch up the grizzly subject again.

In the early days of the gold discovery, "prospecting" parties and hunters often fell in with the grizzly bear in their wanderings, and many was the battle between this sovereign of the Sierra and his invading foe; but leaden balls, and long rifles, unlike the arrows of the Indians generally, proved too much for him, and steaks of bear meat often formed the meal of the hunter, and miner. He is still occasionally to be met with among the foot hills of the golden range, but his home is now high up in the snowy Sierra, where the prospecting miner rarely comes, and the hunter is not often seen. Among the mountains of the coast range, the grizzly is more frequently to be met with than in the Sierra Nevada, as here he is less troubled by miners and hunters. His food is principally the large sweet acorn so plentiful throughout California, together with various kinds of roots, which he readily digs up with his long sharp claws. He is fond of the young and tender shoots of the oak tree, and in the spring of the year I have often seen large limbs, broken down, which had been done by the bear in browsing. Standing upon his hind legs, with his powerful fore paws he reaches up and breaks down a limb, or bends it low enough for his purpose.

In the summer of '50, I was mining on the Calaveras river, near "Hart's Bar." Several of us had noticed bear tracks in the vicinity for some time past, and one morning while all hands were at breakfast, an old Mexican came running into camp, breathless , and pale as his swarthy face would admit of, exclaiming el oso! el oso!! (the bear, the bear.) As soon as he was able to speak distinctly, he told us that in hunting for his mule just the other side of the hill from camp, he had suddenly come upon a large bear feeding upon the lower branches of an oak tree. When he first saw him he was so much frightened that he threw his serapa (blanket) at him, and struck out for camp as fast as he could travel. Great was the excitement created in our little community on the receipt of this intelligence. Hurrah for a bear hunt!!

All the guns in the camp were at once loaded with balls, or slugs. Several revolvers - "Allen's pepper boxes" all of them - were produced. (A poor weapon by the way. One could not much more that hit the side of a barn with one of them, at a dozen paces.) Blood-thirsty knives were buckled into belts of resolute individuals. Those not possessing regular weapons, shouldered axes, clubs, &c., and one enthusiastic Hibernian, with two carving knives in his belt, flourished a heavy pick handle, a la shillelagh, and illustrated to us how he "could give the baste three Connaught raps on the skull, while he was making one rake with his paw." He begged to have the pleasure of being the first one to attack "Misther Bruin," and would like to show us "how nately he could dispatch the animal, and lay him over without assistance."

These warlike preparations took but a short time, and away started the whole valiant little crowd of us, with the old greaser bringing up the rear, accompanying us as a guide, and ready to run, the minute he should get sight at the dreaded adversary.

Various were the plans of action, proposed. - Many were for marching right up, surrounding him, and giving him "fits." Some were for all hands keeping together and attacking him en masse, and one timid individual suggested that we all get as near as possible to the bear, surrounding him, and then climbing trees, from which we could shoot at him, and if he attempted to attack us, we could slaughter him with perfect impunity. We soon arrived at the place, and carefully, and with great circumspection we advanced. But where was the bear? He had perhaps got wind of our intentions, and prudently "vamosed," for he was nowhere to be seen. There lay the serapa of the Mexican, where he has thrown it when he took to his heels. - Bruin was probably about as much frightened as the old greaser was, and had left about the same time. There was the tree, and large broken branches lay scattered under it. Paddy with the pick-handle took a survey, and stoically remarked that "if the grizzly divil could smash sich big limbs as them, what would a pick-handle be forninst him, sure." Peculiarly large, and deep tracks in the bed of a small stream near by, showed the direction Bruin had taken, but no one seemed inclined to follow him in the dense chapparal. We held a council of war on the spot, and decided that the most expedient course left to us, under the circumstances, was to go home again, which we accordingly did, fully impressed however, with the conviction that if the enemy had not evacuated the premises, we should certainly have massacred him at discretion.

His broad heavy tracks showed him to have been a terrible big fellow, and I have often, since then, shrewdly suspected that it was best for us that we did not find him, for few of us had ever seen a grizzly bear, and none of us knew any more about attacking one than so many goats would; and in case the bear showed fight, some poor fellow would most probably have got killed, or badly hurt in the melee that would have ensued.

When hard pushed by hunger, the grizzly will make a descent among the ranches, and help himself to pigs, or sheep. These he will capture by running them down, as a poor lean grizzly can run very fast, but a fat bear, like a fat man, may be classed among poor runners. - Hunger naturally makes him fierce, and unscrupulous, and woe to the luckless wight who may happen to fall in his way. When young and fat, grizzly meat is fine eating. It is tender, sweet, and juicy, and resembles pork in appearance and taste more than anything else I can think of, but when old and lean, the meat has a strong and not very agreeable taste. Although the grizzly is classed among carniverous beasts, yet he seems to have an aversion to a dead human body, as instances have been known of individuals - when beset by one of these ferocious beasts - throwing themselves flat on their faces, and by holding their breath as much as possible, and lying still as though they were dead, the bear would, after biting and scratching them a little, by way of examination, go away and leave them, apparently satisfied with his victory. The best place to shoot a grizzly is through the head, and a ball put in just back of his eye and near the ear is unquestionably a "settler," Just behind the shoulder is the next best place, and a ball well put in there will generally do what is required; but he is very tenacious of life, and will fight for a long time, even when mortally wounded.

In the winter of '50 I knew a hunter by the name of Kirk, on the Calaveras, who used to follow hunting, entirely. He was an unerring shot, and with his long Kentucky rifle, he rarely failed to come in from a days hunt, without either plenty of venison, or a bear, and sometimes both. When on a bear hunt, he always went alone, and would have no one with him, as, in case he came across a grizzly, he wished to have the undivided attention of the beast directed towards himself alone.

He carried his rifle, a Colt's navy revolver, and a keen hunting knife. His usual method was to advance near enough to the bear to shoot him through the head, and kill him at the first shot, and if he failed in this, as the bear advanced upon him, he would dispatch him with his revolver, or knife. I do not know that he ever received so much as a scratch in his numerous encounters with the grizzly bear. He was from Missouri, was about six feet in height, a man of iron nerve, and a total stranger to fear. But, one day in the spring of '51, he started on his last hunt. He was absent beyond his usual time, and his friends becoming alarmed, a search was instituted, which resulted in his being found dead in the woods, some ten miles from home, with a bullet hole through his body, and two arrows sticking in his breast. His murderers were never discovered, although two Indians who were suspected to have done the deed, were shot by his friends. Poor Tom Kirk - On the Calaveras road, about a mile below Double Springs his remains lie buried. A piece of plank painted white, and bearing his initials - T. K. - stands at the head of his grave, and a neat white picket fence encloses the place where he sleeps, indicating to the passers by, the spot where rests one who was a faithful friend, an honest man, and as brave a hunter as ever carried a rifle. 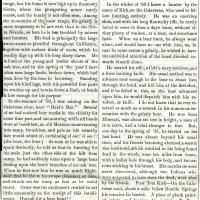