Among the many resources of this state, the raising of sheep and the exportation of wool promises ere long to become one of the main sources of wealth, and it may not be many years before wool is a principal staple of California trade. This state being admirably adapted to wool-growing, a fine article of wool is raised here, and speculators are engaged in buying it up for shipment to the New York market, where it will command a high price.

Hides and tallow, before the gold discovery, formed the principal, in fact almost the only articles of export, but this source of wealth was soon swallowed up and lost sight of, in the great rush for gold. No less cattle were slaughtered, but they were butchered for food, and the hides were used for tents, roofs, and such like purposes, or were left uncared for to rot on the ground. But now again, large quantities of hides are being exported, to be returned in time to us, in the shape of boots and shoes. Tanneries are in operation here at various points, but not extensively enough to prevent exportation of the green hides. Stock-raising is probably as profitable business as any in the country at the present time, as even raising the cattle for slaughtering alone, the beef commands from fifteen to thirty cents per pound, and the hides and tallow bring a good price. In San Francisco, "Porter House steaks" are thirty cents per pound, no matter what part of the animal they are taken from. "What's in a name."

The Salmon fisheries throughout the state, during the past season, yielded larger returns than ever before. Besides what is used for home consumption, large quantities are salted down, or smoked for exportation, affording lucrative employment to a large number of persons. The Chinese in the interior have made it quite a branch of their business, capturing and curing Salmon for the large dealers.

The Salmon Trout of the mountain streams is a most beautiful and delicious fish, and not to be beaten for good eating by any other freshwater fish; at least I used to think so when I was a gold digger. They generally weigh from two to four pounds, and are abundant in most of the upper streams and river sources of the Sierra Nevada. In the fish-markets of San Francisco, are to be seen fish of all kinds, sizes, and shapes, from a big sturgeon, down to a shrimp. Clams and Oysters are there to be found, but not "Norfolk" oysters or good old down east clams, such as are to be found on Plymouth shores. The cod-fish, too, are different, both in color and shape, from those at home and are finer meated.

Now, the "dry season" is certainly with us; the harvest is past, and the whole surface of the earth is dry and parched. Large cracks appear in the rich soil, and the whole of California, by means of hot sun and dry winds, seems converted into one vast "adobe" or sun-dried brick. The grass of the pastures is dry, but still is good feed for cattle, until the first rains, when the new grass springs up fresh and green. Now is the season of fires. The wadding, discharged from a gun, lighting among the dry grass, or other trifling cause, may kindle a fire that will burn over thousands of acres, and destroy much valuable property, before it can be arrested; for the grass burns like tinder, and the fire runs before the wind like a race hound. Look in almost any direction in the night, and fires can be seen gleaming on the mountain ranges, or on the tule plains, kindled either by accident or design, - as often the one as the other. A fire has been burning in the coast range mountains, in sight, a few miles from here, for the last six weeks, and some haystacks, houses, fences, &c., been destroyed. It is still burning high up in the mountains, and it presents a most beautiful appearance in the night time. But – 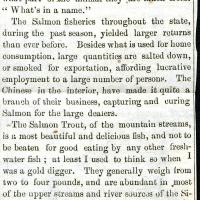