You will see in the California papers by this mail, the full particulars of the trial and acquittal of Durkee charged with piracy, in boarding a schooner in the bay, on the 22d of June last, by order of the Vigilance Committee, and taking by force from her, sundry cases of muskets and other arms belonging to government.

The far-famed Vigilance Committee, the terror of assassins and those whose ways are evil, although apparently disbanded, nevertheless still exist in full force and organization, and should any emergency again occur, calling for their decisive action and interference, they will be found ready and equal to the occasion.

In judging of their past acts, and the general unanimity with which they have been upheld by their fellow citizens and the people of this state, no doubt many of our friends in the Atlantic states will join in condemnation. But allowances must be made for our peculiar and comparatively unsettled state of society and institutions. Look at the causes which called forth and produced this vast combination and rising of the whole people in their might, to assert the majesty of the down-trodden and outraged laws. Too long had murderers, thieves, and shoulder-strikers, stalked boldly in our midst. Too long had our elections been controlled, and our city offices filled by rowdies, gamblers, and those whose only object was to rob the treasury and swindle the city out of all that was valuable belonging to her. Let no one say that our remedy for these evils, should have been at the polls, for the “patent ballot-box," captured by the Vigilance Committee, and which has been used at all the city elections, is still on exhibition, showing the foul and rascally means by which honest votes have been set aside, others substituted, an our offices filled with corrupt and dishonest men. The people are once again in power; the ends for which they have contended are now apparent to all, and to them they point in justification of the means used.

On the 10th inst., for a rarity, we were visited by several showers of rain, the first of the season. From this, the weatherwise ones, predict an early and wet winter. Every fall these wiseacres shake their heads, and speak of the "signs" and "indications" they see of a very "wet winter;" but nevertheless, "the clerk of the weather," who is said to have the principal control in that respect, has generally evinced a total disregard of all their wise auguries, and since 1848, we have had but two decidedly "wet winters;" these were the winters of '49 and '52.

The climate of this great valley of Santa Clara, is the most even and temperate I have yet met with in California. During the dry season, the sky is clear for months together. It is warm, but not uncomfortably so, as a cool refreshing breeze, invariably comes in from the bay to temper the air. The winters too, are mild, an ice rarely forms of more than an inch in thickness. The air is always pure, bracing and healthy, and cases of sickness are most happily rare. 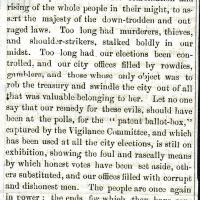