Like "Poor Joe" in Dickens' "Bleak House," your old correspondent has again been "moving on," and is at present domesticated and settled for a time upon the ranche of a friend at this point, in a rural district far removed from the dust, din, assassinations, executions, proclamations, and exciting scenes, alas! so incidental to San Francisco life during the past three or four months; and as in that stirring city, our correspondence partook of the topics and spirit of the times, so it now may perhaps assume, and partake of a more rural and peaceable character.

Mountain View is situated in the valley of Santa Clara, forty miles from San Francisco, in the midst of a fine agricultural district, and like many other "towns" in California, consists of a post-office, hotel, a grocery or so, a dwelling house, a Jew shop, &c. It is very prettily located on the main road to San Jose, shaded by large, fine spreading oaks; and being somewhat of a central point for the surrounding district, will perhaps become at some future time, a town of the first importance. It obviously received its peculiar name from the fine view of the coast range of mountains presented at this particular point. I presume that the ranche from which I write, might be considered as rather in the "suburbs," as it is two miles from the post-office.

Most of the ranches hereabouts produced rather short crops this year, owing to backwardness of the season and the lack of rain, and in many cases the crops would not pay to harvest. One friend of mine, who has just finished harvesting, tells me that every pound of wheat that he raised this season, cost him just seven cents. It only yielded about six bushels to the acre.

On this ranche a medium crop was raised, the grain yielding forty bushels to the acre; this is by reason of being better located on lower ground, and under the best of management.

The squirrels are the grand pest of this valley. They are almost as bad as the locusts of Egypt, or the grasshoppers of Utah, in their devastation on the vegetable and grain crops. They are a large variety of the gray ground squirrel; the whole valley is their burrow, and their name is indeed "Legion," for they are plentier here, than are the rats in San Francisco. "Squirrel proof" fencing, and strychnine, are the most effectual weapons used against them. But of these troublesome little vermin I have already written in a former letter.

This ranche is supplied with water by a splendid Artesian well, probably the best one in the valley. It is one hundred and ninety-four feet in depth, five inches in diameter, and the cool pure water flows from it at the rate of nearly fifty gallons a minute, in a steady unvarying stream; furnishing an abundant supply for the house, barns, cattle, irrigation purposes, &c. This is on a level plain six miles from any hills. It was completed two years ago, at the expense of about one thousand dollars, and up to the present time has supplied the same quantity of water, without the least diminution. There are several other wells of this description in the valley, but in many of them the water has failed partially or entirely.

How would one of these fine sparkling Artesian fountains look in Town Square, under the shady branches of those glorious old elms; or on the Green, dashing and playing among the green grass, as it sung and danced gaily onward, with unceasing flow, to mingle its limpid waters with the blue waters of the Pilgrim's harbor? 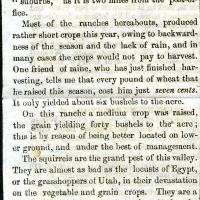