No. XXVIII.
From our California Correspondent.
San Francisco, July 5th, 1856.

Saturday, the 21st of last month, was another of those days of deep and terrible popular excitement which have been so characteristic of San Francisco in the last few weeks.

About half past three o'clock in the afternoon of that day, Officer L. A. Hopkins, with a small posse of the vigilance police, by order of the committee attempted to arrest a Mr. J. R. Maloney, on Jackson street near Kearney. Judge Terry of the supreme court and four others were with Maloney, and attempted by force of arms to prevent the arrest. An affray was the result, in which the Judge stabbed Hopkins in the neck with a Bowie knife, inflicting a very dangerous wound. This ended the fight, and Maloney and his party took refuge in the armory of the San Francisco Blues, which was near by.

The news of the affray spread with the speed of lightning, and in a few moments the big bell of the vigilance committee sounded forth the alarm. Then commenced a scene which defies description. Men rushed through the streets from all quarters. Merchants closed their stores, mechanics threw aside their tools, and all rushed in a vast human tide to the fortified headquarters of the vigilance committee, now called "Fort Vigilance," on Sacramento street.

In less time than it takes to write this, a thousand of the committee were under arms and marching to the scene of action. Arrived at the armory, they proceeded at once to surround it, and on the arrival of a portion of the executive committee, a surrender of all those in the building was demanded, together with the arms, ammunition, &c., within fifteen minutes, with the promise of the committee that the prisoners as well as the building should be protected from parties outside the vigilance organization. The demand was complied with, carriages were procured, and Judge Terry, Maloney, and all the occupants, sixteen in number, were escorted down to Fort Vigilance under a very strong guard. A hundred stand of arms, together with the accoutrements, were taken from the armory and taken to the fort.

During these operations, a large force of the committees had invested the California Exchange, at the foot of the Plaza, the main head-quarters of the so-called "law and order" party. Two heavy field-pieces, loaded, were planted in the street in front of the building, and those within commanded to surrender. There were about 70 of Gov. Johnson's "troops" in the building at the time. Considerable negotiations were formally entered into and resulted in the surrender of all hands, together with three hundred stand of arms, ammunition, &c., which was at once placed on drays and conveyed, together with all the prisoners, under a guard of 800 men, to the vigilance head-quarters. The other "law and order" armories in the city were also taken possession of and the arms &c. removed to the fort.

Thus happily ended the decisive proceedings of the committee of the people and the total annihilation of the miscalled "law and order" party was accomplished for the present at least. Most of the prisoners were discharged after a few hours' confinement, they being probably deemed more troublesome than dangerous; their leaders, however, were released on parole of honor. At sunset everything was as quiet as though nothing extraordinary had taken place.

The entire proceedings of the committee in this grand coup de etat were conducted throughout in that orderly and systematic manner which has characterized their action from the first; and as the different armed detachments deployed through the streets, the whole people seemed to realize that they were under the protection of those in whom they could implicitly trust. It was a signal rebuke to him whom the people had chosen to rule over them as governor of the state, for daring to collect arms in their midst to shoot down the people. And Judge Terry, too, a judge of the supreme court, in a street fight! Why was he not at Sacramento where he belonged, by the side of Gov. Johnson? for he was the governor's principal adviser when he issued that most ill-timed and ill-advised proclamation, which he would gladly withdraw even now, if he could do so without disgrace.

During the height of the excitement the popular voice was for the hanging of Judge Terry at once and had Hopkins died, it is to be feared that violent measures would indeed have been resorted to. Hopkins was stabbed in the back of the neck, and the wound is nearly six inches deep and an inch and a quarter long. It is a fearful wound and he has been fluctuating between life and death, but the crisis is now nearly past and strong hopes are entertained of his ultimate recovery. Judge Terry is still in the hands of the vigilance committee, and will be dealt with as they may see fit. Even if Hopkins dies, they will hardly hang him, as there are some circumstances to be considered in mitigation of the crime, and notwithstanding people may demand life for life, and cry "hang him!" wise and cool heads rule their councils, and naught but justice will be meted out to the guilty; and with their decision, as heretofore, the whole people will be satisfied.

The governor can do nothing at present, having neither troops to fight nor arms to fight with. For this condition of things he may thank his own foolish course; for had he not taken the stand he has, the committee would not have been obliged to fortify their position and act on the defensive, but long ere this would have finished their mission and, resigning their power into the hands of the people from whom it was received, retired from the scene.

Again has the "ever glorious fourth" come and passed away. It was celebrated here as usual, by a procession, great display of flags, the booming of big guns, the banging of innumerable small guns, and the cracking, popping and fizzing of pistols, crackers and squibs. 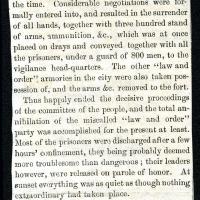