From our California Correspondent.
No. XXVII.
San Francisco, June 19th, 1856.

The Proclamation of the Governor and the general orders of Major Gen. Sherman, which had just been issued at the date of my last letter, had a somewhat exciting effect for about a week. Books were opened at the various recruiting offices, and several patriotically disposed individuals rallied to join the armies of the Governor and to show themselves ready to be drilled and fight under the standard of "Law and Order;" but it is notoriously a fact that those who thus gallantly came forward were mostly rowdies, gamblers, shoulder-strikers, &c; there were very few honest men among them. Several of the public officers whose duty called upon them to comply with the Proclamation resigned their offices. The Wallace Guards, National Guard, and others of the city military who were called upon disbanded at once rather than turn their arms against their fellow citizens who were engaged in a just cause. They afterwards re-organized as independent companies, and are on the side of the people.

Meanwhile, the Vigilance Committee felt called upon to take measures in opposition to the Governor, and therefore signified their willingness to receive accessions to their numbers; accordingly hundreds rushed to join their ranks. I do not know their exact number at present, but they number many thousands. No gambler, rowdy, shoulder-striker, or any but what are known to be good well-disposed citizens, in good standing in society, are allowed to be sworn in. Having unlimited funds at their disposal, they have thousands of stands of arms of all descriptions at their headquarters, and the buildings which they now occupy are regularly fortified with cannon mounted on the roofs and at the windows commanding every avenue of approach. All along the front, on Sacramento street, they have thrown up a heavy barricade or breast-work of bags of sand, and through an embrasure a big thirty-two pounder is pointing up Sacramento street.

The "Law and Order" army of the Governor will go into camp at the Potrero, about three miles from this city, to-morrow - so say the newspapers - in readiness, at the call of the Governor, to "go in" and whip the Vigilance Committee. Their entire effective force numbers about five hundred men, and from the fewness of the numbers, as compared with those of the Committee, one would naturally suppose that their side of the grand issue is rather unpopular.

Major Gen. Sherman, after seeing the effect which his general orders had upon the minds of the people, on the 8th inst. sent in his resignation to the Governor rather than remain in the false position in which he was placed in relation to his fellow citizens. The City Marshal, Hampton North, has also resigned his office.

On the 5th of this month, Duane, Mulligan, and the other ballot-box stuffers and villains that the Committee had in their hands, were placed on ship-board and transported to some more genial clime; the pleasures of their presence, and their public services being no longer required in this ungrateful locality. A part of them were said to have been sent to Australia, part to Callao, a portion of them to the Sandwich Islands, and some on the steamer Golden Age for New York; but the thing was managed so quietly that few, if any, besides the Vigilance Committee know for certain where they were sent. Since then the Committee have arrested other notorious characters, who will also be sent off. Several others have had "orders to leave" by to-morrow. The following is a copy of one of these "orders:"

William Hamilton - Sir: - The Committee of Vigilance, after a full investigation and deliberation, declare you guilty of being a notoriously bad character, and dangerous person, a disturber of the peace, a violator of the integrity of the ballot-box; and have accordingly adjudged the following sentence:

That you, William Hamilton, leave the State of California on or before the 20th day of June, 1856, never more to return, under the severest penalties.

Among the recent arrests by the Committee is that of Thomas B. Cunningham, an undertaker in this city. He is said to have been the inventor and manufacturer of the celebrated "patent ballot-box," now on exhibition in the rooms of the Committee. This renowned box was captured by the Committee two or three weeks ago. It has been in use at the various city elections for the last two or three years and no one not in the secret would see anything unusual about it; but although a very common, unpretending looking box, it has a false side and bottom, worked with slides and springs, by means of which it can be duly "charged" with illegal votes before the election; or after the polls are closed and the box sealed up, all the honest votes can be removed, and others substituted without breaking the seal.

Thus have our elections been controlled and turned into a complete farce, and our city offices bartered and sold by Casey, Duane, Sullivan and such like scoundrels, to those rascals paying the best for them. The confession of Yankee Sullivan tells admirably how the thing was done. These are the arrangements with which the Committee are now interfering, and with the participants in these nefarious transactions are they dealing not half so bad as they deserve. It is a very mild punishment to send them out of the country.

By such ingenious arrangements as these was the late election in the new county of San Mateo, near here, conducted, and the droll anomaly presented of about ten times as many votes polled as there were voters in the County. But the people arose in their might and kicked out all these self-elected scamps and setting the election entirely aside, called another election, which was conducted on more honest and satisfactory principles.

On the afternoon of the 14th inst, a tremendous mass meeting of the people was held in this city in the open space front of the Oriental Hotel. The number present was estimated at from 10 to 12,000, and they were addressed by Hons. Bailie Peyton, Wm. Duer, Judge G. W. Barker and others. The "stars and stripes" waved over the immense assemblage, and it was altogether an exciting scene - such as is not often beheld in any country. A series of resolutions, fully endorsing the entire action of the Vigilance Committee and assuring them of future support, were unanimously adopted; with loud and prolonged cheers the meeting adjourned, and thus ended this most enthusiastic demonstration.

[Our correspondent's letter closes with a synopsis of the Constitution under which the Committee act, which we are obliged to omit for want of space. The Governor has agreed not make any decisive move until the Committee has finished the work so well begun, and all fears of civil war are dissipated.] 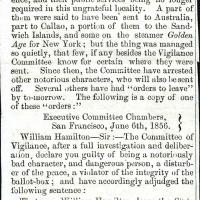