From our California Correspondent.
No. XXIII.
San Francisco, April 19, 1856.

Between the ninth and the fifteenth of this month considerable quantities of rain fell; reinvigorating the suffering crops, giving a fresh supply of water for mining purposes, and diffusing new life through all branches of trade and occupation. The interior papers comment happily upon the fresh impetus which this generous rain has given to all mining operations, and make frequent mention of many a good “strike,” and of numerous pounds of the yellow metal which are daily being “taken out” in the various mining localities. In some places, water cannot be had to wash the dirt, except when it rains; but in most parts of the ravines a supply is obtained by means of the numerous canals and ditches, which traverse the mountains in all directions. Most of the smaller ditches bring the water from some large gulch or creek, which runs dry in summer, but when supplied with water, and swollen by the winter rains, they afford a supply of water through the ditches for some time. The largest canals are cut from the main rivers, and generally supply water the year round to the principal mining localities. This system of canals has worked a wonderful change in the appearance of the mining region within the last few years, and the poor unsophisticated Digger Indian, now gazes with wonder and surprise to see the rivers leaving their ancient beds, and winding round the tops of the lofty hills and mountains, crossing deep ravines by means of immense aqueducts suspended high in air upon trestle work, and looking at a distance, like so many big spider webs. The Calaveras being a small river, and hot heading so high up in the mountains as the other rivers, used to dry up entirely, in the dry season, and rise again at the approach of winter. In the fall of 1851, I walked up the bed of this river for a mile or more, there being no water to be seen; but that cannot well be done again, for canals from the neighboring rivers now empty into it and supply it with water the year round. There is an old Indian legend connected with the Calaveras which may not be uninteresting to some of your readers, therefore I will here relate it.

"Many, many moons ago," and long before the covetous eye of the ever intruding "pale face" had gazed upon this happy country, a powerful tribe of Indians inhabited the wooded banks and fertile bottom lands of this river. Their hunting grounds were broad and well stocked with myriads of fat deer and other game of all kinds in plenty, and the hunter never returned home to his wigwam at night empty handed, but loaded with game killed with his keen arrows. Their chief was the great "El-kar-wa," so called from his great bravery and sagacity, and led by him they feared not the powerful neighboring tribes of the Mokelumne and Stanislaus. With the latter they were at peace, but the Mokelumne Indians had long been their deadliest foes and many a bloody battle had they fought together. Hunting parties often encountered parties of their enemies and numerous and sanguinary were their skirmishes. One day El-kar-wa, accompanied by many of his principal friends and an only daughter, was out on a grand hunt. They were very successful, and at length, tired with their sport, they were resting under the shade of a spreading oak-tree. The friends of the chief were talking and laughing over the incidents of the chase, and by his side sat his well beloved daughter, gladdening the heart of the stern old chief with her ringing laugh and sunny smile. Her name was "Le-wanna-ka," which, let us presume for romance sake, meant Bounding Fawn, and also that she was a very pretty young "Bright Alfarata" with "jetty locks in wavy tresses flowing," although the feminine specimens of the genus "Digger" now extant hardly justify any such supposition. On a sudden the shrill war-whoop of the Mokelumne Indians rang in their ears and they were surprised by a large war-party of their foes. They sprang to their feet, fighting hand to hand with the enemy and as the heavy tomahawk of El-kar-wa sank deep into the skull of a Mokelumne warrior, with a faint cry Le-wanna-ka fell dead at her father's feet, with the deadly arrow piercing her bosom. The old chief gave a howl of agony at the sight and fought with redoubled and desperate fury, but their enemies were too numerous and powerful for them, and still fighting like tigers, they bore away the body of Le-wanna-ka. Late that evening they arrived home, tired and wounded. Runners were sent out at once and at sunrise the next morning all the warriors of the tribe were assembled before the camp of El-kar-wa. A pile of oak logs was gathered, on which the body of Le-wanna-ka was laid and burned with due honor and great ceremony, according to the custom of the tribe, and as the warriors with loud howls of grief danced madly around the flames, they brandished aloft their weapons and vowed deep and terrible vengeance on their enemies. The plans of El-kar-wa were soon unfolded to his men, and at the head of a hundred of his trustiest warriors he took the trail toward the Mokelumne. Half way between the two rivers, on a small plain, he saw a large body of the Mokelumne warriors advancing towards him, upon which he seemed alarmed and beat a retreat, followed by the entire body of the enemy in full cry, who all madly pursued him as he fled over hill and dale with his trusty warriors until at length he lead them down a steep, dark ravine whose rocky sides, crowned with dense chaparral, rose bold and precipitous as it descended towards the river; when, on a sudden, near the foot of the ravine, El-kar-wa and his braves turned and, with a loud whoop of defiance, faced their foes. That war-whoop was echoed and re-echoed from every rock and from the bold, rocky sides of the ravine. The warrior-braves of El-kar-wa commanded every point, and their foes discovered too late that they had been led into a deadly ambuscade. Clouds of arrows and showers of stones and heavy rocks came crashing down from either side. They could not retrace their steps, but utterly at the mercy of a merciless foe, they struggled to extricate themselves. Their only chance was to escape by the mouth of the ravine, and here they fought with the madness of desperation. A few only effected their escape. Many were killed by arrows in crossing the river. This unequal contest was soon ended, and hundreds of reeking scalps were the trophies of the victors. The heads of the bodies were then all cut off and thrown down among the rocks by the river's side, but the bodies were afterwards burned. The floods of successive winters washed the fleshless skulls of the unfortunate Mokelumne warriors down along the river's course, and from this circumstance it is that in after years the river received the name which it now bears: "Rio de Calaveras," --River of Skulls. 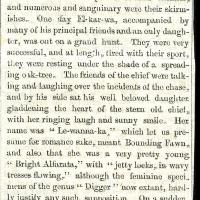