No. XXI.
From our California Correspondent.
San Francisco, March 18th, 1856.

During the past month there has bat very little rain fallen, consequently the young grass was fast drying up, and the farming interest was beginning to suffer. All the newspapers from the interior, reported "dry times" there, and great consequent discontent among the miners, in regard to the weather. On the 14th inst, however, we had a glorious rain throughout the country; but more is needed soon, or the crops will turn out small this season.

Accounts from the mines, made frequent mention of mining accidents, whereby many a poor fellow is crushed to death by the caving of banks, tunnels, &c. Such accidents are very frequent of late, and generally fatal; and fortunate indeed is he who is rescued from such a horrid death, and lives to tell the tale. In former years the gold was readily and plentifully found in the beds of the ravines, but now, these being worked out, the miners have to work in the banks, and in the bowels of the hills and mountains, hence the frequency of mining accidents now-a-days. The summer months in the mines are very dry; therefore the earth is baked hard and firm, and there is comparatively little danger in working in tunnels and under high banks of earth; but when by the heavy winter rains, these banks become saturated and heavy, they are liable to slide and cave in; and wo be unto the luckless individual who happens to be in the way.

The jury in the case of A.A. Cohen, for the embezzlement of the funds of Adams & Co., in their verdict, find the amount of funds which passed into the said Cohen's hands while in the capacity of Receiver for Adams & Co., to be $269,046,18. He had accounted to the present Receiver for $124,803,55. He is now required to account for the deficiency, which he'd much rather not if he could conveniently avoid it, but the people have become tired of these frequent swindling failures, and are having them looked into, and investigated rather more closely than is agreeable to some of those financiering swindlers.

Yesterday was St. Patrick's day, and the Irish in this city, acting upon the assumed hypothesis that “St Patrick was just as good a man as ever the Fourth of July was," celebrated the anniversary of him that made the snakes and frogs “vamoose” from “swate ould Ireland.” In the morning a procession was formed, of natives of the Green Isle, and marched to St. Mary's Cathedral, where an address was delivered, and high mass was said; after which the procession, bearing banners and emblems, moved through many of the principal streets of the city, accompanied by a brass band. The festivities of the occasion wound up in the evening with balls, and social gatherings at various places, and the bleared eyes and broken noses of this morning, attest that they passed off "harmoniously.” 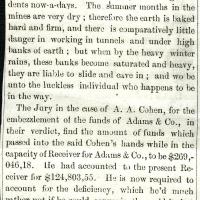