No. XX
From our California Correspondent.
San Francisco, March 4th, 1856.

"Washington's birth day" was duly celebrated here and was made a holiday by most of our population. Several of the military and fire companies paraded, salutes were fired, all the shipping in the bay displayed their numerous flags, and in the evening there were balls given at several places, which were all fully attended. During the afternoon some of the fire engines tried their aquatic powers in the squirting line, to the satisfaction of numerous spectators. A splendid "Hunneman" engine, just built for the navy yard at Mare Island, was also thoroughly tested and proved to be A No. 1. But the feature of the day was the parade of the "Wallace Guards," a new volunteer corps, this being their first public appearance in this city. They were dressed in the regular Highland costume, and made a most picturesque and romantic appearance in their "tartan array" of high-plumed bonnets, plaid, kilts, &c., and as this costume involved the exposure of some forty or fifty pairs of bare legs, the balmy winter breezes of this locality were rather more suited to their parade than would have been one of our down east "nor westers" at this season of the year. They were accompanied by a splendid brass band, which discoursed most eloquent and appropriate music, and among the many Scottish pieces which they played, I recognized "The Campbells are coming," "The bonny breast-knots," "Highland Laddie," "Comin' thro' the rye," and other favorites. Not the least novelty of the occasion was an ancient "Highland Piper" in costume, who occupied an honorary position just behind the brass band, and at intervals he gave a specimen of his natural capabilities on the Scotch bagpipes, to the no small edification of the numerous and admiring crowd that followed through all the principal streets of the city. They terminated the exercises of the day with a splendid ball at the International Hotel, which was very numerously attended and highly spoken of by the participants.

In honor of the day, as well as to signalize the completion of the road, the Sacramento Valley Railroad, was thrown open free to the public on the 22d, and the Officers and Directors of the Company together with a number of invited guests from this city an Sacramento, made a pleasure excursion over the road to its termination, at the new town of Folsom, on the American river, twenty-six miles from Sacramento, and participated in a dinner and ball, in honor of the occasion. This is the first railroad in California, and owing to the level nature of the section of country which it traverses, it has been thus far completed at a cost which would not be considered heavy in any other country, where labor is much cheaper than it is here.

Late accounts from Puget Sound ad Northern Oregon, represent the Indians there, as suing for peace, but other accounts just received from Northern California and Southern Oregon, are very different indeed. There, they are in arms, and seem to be bent on the total extermination of all the whites. They have attacked and killed the farmers, and burned all the houses on the south side of Rogue's River, as well as killed nearly all of a small company of volunteers. About thirty settlers and their families have been killed. The inhabitants about the mouth of the river, have all retreated to the north side, where they have a small fort. At Crescent City, the excitement is great and much hard fighting is anticipated, they have petitioned the Governor of the state to authorize them to call out as Volunteers, all who are capable of bearing arms. The Indians are numerous, brave and merciless. There is no time to spare, and whatever is to be done, demands to be, and probably will be done by our Legislature at once, as the exigency of the case demands.

The investigation of the affairs of the great banking firm of Adams & Co. in this state has occupied much public attention of late and many interesting financial "operations" are being brought to light in relation to the failure of that house. Mr. A. A. Cohen, who was appointed receiver after the suspension, is now and has been on trial for some time, charged with the embezzlement of the funds of the firm. He attempted, a few weeks ago, to escape on one of the steamers, by secreting himself among the machinery, but was detected and brought back and is now kept where he can be easily found when wanted. H. M. Naglee, Esq., has been appointed receiver in his place and Cohen required to transfer to him all moneys, accounts, books &c., received while in the capacity of receiver. This, Cohen professes to have done, but the books containing the accounts of the transactions of the firm immediately previous to suspension were missing, so that the amount of funds which were spirited away by the absconded partner, J. C. Woods, as well as by the presumed peculations of Cohen and others , could not be ascertained. Much search, of course, has been made for the missing books, but without success, until last Thursday afternoon, the 28th ult., when quite an excitement was created by the singular discovery of two of the missing books. They were picked up floating in the surf at North Beach, in the northerly part of this city. They were enclosed in a canvass bag and from appearance had evidently not been long in the water. They were the "General Ledger" and "General Cash Book," and their being discovered so opportunely just at this time puts quite a new aspect on several of the points in the case, although some important leaves have been torn out of each of them. By whose rascality these books were thus made way with is a question which remains to be solved. The important books still missing are the Bills Receivable book, the General Ledger balance book and the Paying Teller's "Cash Settlements," which last is of great importance. Should these books also happen to "turn up," the whole of the rascality of some of those connected with this house here will be brought to light, and woe be to those on whose necks the sword of justice falls.

By the by, speaking of money matters, I must tell you a little anecdote of Mr. B - an enterprising individual who lately arrived here from Massachusetts. But we will first premise that you are cognizant of the fact that copper coin is unknown in the currency of California, and a copper "cent” is of no value whatever and scarcely ever to be met with here. Well, on landing on the wharf, he hired a drayman to take his baggage round to the place of business of a friend in the city, for which the drayman charged him the usual fee of half a dollar. B-- thrust his hand into his pocket and drew forth a “quarter of a dollar and three copper cents," which he offered to the drayman, saying this was all the money he had. The accommodating drayman took the “quarter,” but rejected the "coppers" with an injured air, remarking “what the d---1 do you s’pose I want of them things." But our friend B--, being bent on doing the benevolent thing, pressed him to accept of them, saying, "here, take ‘em, I don't want 'em, you're welcome to ‘em, take 'em.” The drayman couldn't stand it any longer, but jumping upon his dray, he drove off, looking over his shoulder at our friend B-- with a surprised and injured air, muttering, something about having a “soul above coppers.” One thing is certain, that the drayman never will forget "the man with the three cents." 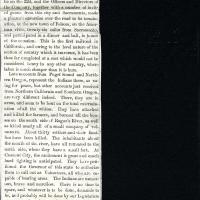