One of the principal topics of interest here since my last, has been the reported discovery of rich gold mines at San Antonio, just across the bay from this city, only some nine or ten miles distant. A great excitement was raised about them a little more than a week ago, and they were said to be just discovered by some Frenchmen, while digging a well. As a matter of course, the rush to the “new diggings" was tremendous. Picks, pans, and shovels, were in great demand, and people of all professions, from commission merchants down to scalawags, and dock loafers, all took passage on the ferry boat, paying their fifty cents each, for the privilege of being ferried across to the land of promise. The boat went crowded each trip, and for a time the ferry proprietors coined money. On the new "placer" hundreds of claims were staked out for miles in extent. Meetings were held on the ground, and laws, rules and regulations made, one of which was that "no person shall hold more than one claim, which shall be but sixty feet square." This was to "prevent monopoly,” and was unanimously adopted.

The excitement is now over; and the Jews, Gentiles, scalawags and dock loafers, have most all come back, reporting the "rich diggings" to be a "humbug," and a "perfect take in.” I have seen several intelligent people well conversant with mines and mining, who have lately visited the place, and who also pronounce it a humbug. Gold has long been known to exist thereabouts, but in so very small quantities that mining for it never could be remunerative, and in all probability this great excitement about the "new diggings,” first originated in the fertile brains of the proprietors of the Contra Costa ferry. They have made a “good thing" out of it certainly, and therein gained what they aimed at.

A lively discussion has been lately carried on through the columns of the California Chronicle, in relation to the first discovery of gold within the borders of this state, and as to whether it was publicly known, that gold mines existed in Upper California, previously to their discovery by Mr. Marshall in 1848; and it has been established that a gold lacer was known, and being worked by several persons near the Mission of San Fernando, in the southern portion of the state from 1840 to 1846, but nevertheless the grand discovery of gold in the northern portion of California, was made by Mr. Marshall, on the 19th of January, 1848, while digging the race of Sutter’s Mill, and the supposition that Col. Fremont was aware of the existence of gold here, previous to Marshall’s discovery, receives no credit here. Many have been of the opinion that he did know of it from the fact of his acquiring the great ranch of “Las Mariposas," situated in the southern part of the mining region, but this is shown to have been obtained by accident.

On the 5th of this month, the steamer “Belle,” exploded her boiler on the river, eleven miles above Sacramento City, killing and wounding some thirty persons. The boat is a complete wreck and a total loss. The cause of this sad calamity is attributed to a defective boiler, and no blame is understood to be attached to the engineer.

On the 15th inst., we had a severe shock of an earthquake, more severe than has ever before been experienced by the "oldest inhabitant." It occurred at twenty-three minutes past five in the morning, and lasted about half a minute. It commenced with a loud rumbling noise, as of the passing of a heavy wagon along the street, and the oscillations seemed to be about north and south. The walls of several brick buildings were cracked, and the heavy cornice on the north side of Goodwin & Co's buildings, corner of Front and Oregon streets, were thrown down to the north. Everybody was awakened by the shock, and many ran out into the streets in various and interesting stages of dishabille. Several of the inmates of the Rassette House, Montgomery Block, and of several of the other largest brick buildings of the city, ran out into the street. In some houses the plastering was shaken down. None of the large bells were rung, but several door bells were heard to ring. Many timid persons were very much frightened, and some talk of leaving the state, for fear of another, and more destructive convulsion of nature.

The Indian war in Oregon is still being vigorously prosecuted, and the Indians do not seem inclined to
“give in,” till they have been whipped satisfactorily.

The Mariposa Gazette, says that the "fight" which was to have come off among the Chinese in Bear Valley, has been indefinitely postponed, owing to the exertions of a few Americans, but nevertheless, full preparations have been made on both sides, in the way of weapons &c., and in all probability they will have a small scrimmage yet in a private way, as the belligerents on both sides are evidently anxious for a "muss." These long-tailed, moon-eyed "Celestials," are a queer set, and cut up some droll capers sometimes in a warlike way, but the mortality attendant upon their “fights,” is seldom very great; and as they appear to deem an occasional "row" among themselves, beneficially indispensable to their well being, why, "go in lemons." 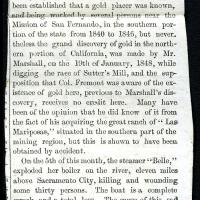