No. XVIII.
From our California Correspondent.
San Francisco, Feb. 3d, 1856.

Not much news of interest to you has transpired during the past fortnight. We have had a great deal of rain, and the papers of the interior are rejoicing much at the great quantities of rain that have lately fallen, affording a full supply of water for all mining purposes. Nearly every gulsh has a tom-head of water running through it, and every ditch is filled to its utmost capacity. The Shasta Republican, says that the bountiful rains have given such an intense impetus to mining operations, that gold dust is being now brought into town for sale in much greater quantities than coin can be obtained to purchase it; but this difficulty will be of course obviated, just as soon as specie can be transported from below.

All along the base of the foot hills of the Sierra Nevada, and in Yolo and Solano counties especially, are vast fields of wild oats, which at this season of the year are just springing up fresh and green, affording feed for myriads of wild geese, deer, and antelope; and numerous hunting parties thereabouts, are taking advantage of the "game season,” and slaughtering by the wholesale. Some hunt for the pleasure of hunting, but more make a regular business of it, and hunt for the profit. They take their game mostly to Sacramento or Stockton for sale, or for shipment to San Francisco. I see it stated in one of the papers, that one of these parties lately killed one hundred and nineteen geese at three shots. This is said to be a fact, but so, it is "murder most fowl," and walking into geese with a perfect looseness. I think they must have used blunderbusses, or young howitzers.

“In common with other mountains containing rich auriferous deposits, it is composed of lava, or basalt, resting on ancient ground, and other depositions from water. Its height above the surface of the surrounding country, varies, owing principally to the variation of the country, and not its own; but it may be said to be from one to five hundred feet in height. On its top, it is level almost as a floor, only descending with much uniformity to the westward, at the rate of about twenty-five feet to the mile. Its width varies in different places, but its general width is about a sixth of a mile. But its most remarkable peculiarity is, that throughout its entire length, which is some fifteen or twenty miles, it winds and curves with other mountains in exact resemblance to the meanderings of a large river; just as it would if it had been once disgorged, a moulten, firey flood, from some old burning Sierra volcano, and rushed down the channel of some vast river, bearing on, and mingling in with its mighty current, quantities of rocks, pebbles, and sand, filling up the whole bed of the river, and then cooling down into a solid moveless mass. Afterwards we must suppose the surrounding country by floods and storms, in the course of ages, to have washed away, till the once river of lava, now stands high above the region around, with precipitous sides, a Table Mountain. Recent reports from the Volcano of the Hawaiian Islands, tells us that the last summer, the lava there, has thus flowed, winding as a river for fifty miles, so doubtless Table Mountain was formed.”

The above remarks on the conformation of this now famous mountain, are the most reasonable and intelligent of any I have yet heard entertained in regard to it. There are some now in Plymouth, who, as well as ourself, can well recollect its singularly level appearance, from which it derived its name, and the round lava stones upon its level top which were so difficult to pick up, owing to their adherence to the surface.

By means of long tunnels, run under this lava, to strike the deposit of gravel in the old river bed, hundreds of sanguine, eager miners are expecting to realize their fortune, but still, probably the channel of this ancient river, like the channels of modern ones, must, and will be, in many places immensely rich, and in other places exceedingly poor; and no doubt as has been the experience thus far in many places, thousands of dollars will be expended in reaching the old bed, where hundreds will not be taken out. Singular petrifactions have been met with in many of these tunnels, consisting of various kinds of wood, large bones, teeth, &c.

The Mariposa Gazette, says that a fight is about to come off at Bear Valley, between two factions of the Chinese, who are said to have assembled in hundreds on either side. The Gazette thus humorously continues: --

"As we understand the arrangements, the affair is to be a sort of collective duel. A line is to be drawn, and at the time agreed upon for the fight, the belligerents will assemble on both sides. At an agreed signal the “fout” will begin. No firearms are to be admitted or allowable in the tournament. The weapons to be used are fashioned out of cold iron, according to the taste of each individual warrior.

The favorite weapon, seems to be a corkscrew, on a large scale, which by dexterous handling, is screwed into the "rice-bag" of an opponent, who is then pulled across the line, and effectually pucker-stoppled. Another weapon is a large knife or rather cleaver, a fair blow with which, would split a Chinaman from the top of his head to the bottom of his bread-basket. All the blacksmiths about Mariposa, are engaged in manufacturing their weapons, and the feud is a source of profit to them at least. The Chinese keep dark as to the particular day of the fight, on account of interruption; for they went to the District Attorney, Judge Daly, requesting him to shed the light of his countenance approvingly upon the arrangements; but the Judge told them he would hang every long-tailed, mother's son of them that was caught in any such performance, which was discouraging, Other councillors, and they are very numerous too, advise them to fight, and that no notice will be taken of it by the authorities. 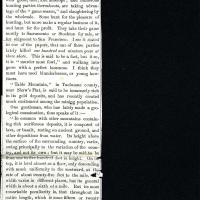