Land of the noble free,

Thy name I love;

I love thy rocks and rills,

Thy woods and templed hills;

My heart with rapture thrills,

DEAR ROCK: - I intended to have written sooner, but the Atlantic mail left here for San Francisco earlier than I had expected, so I was belated; but, as the old saying is, "better late than never."

The "glorious fourth" passed off as usual here in California. A most unreasonable amount of powder was burnt, and the thunder of big guns, and the cracking and popping of rifles, revolvers and other small arms, resounded most patriotically throughout the length and breadth of this golden portion of Uncle Sam's dominions.

At early dawn Fort John was alive, stirring and noisy. Guns, pistols, and everything that would burn powder, were put in requisition, and the old hills and mountains hereabouts, resounded with patriotic echoes. After breakfast all hands mustered, formed into quite an extensive military organization, and "single file," preceded by fife and drum, playing “Yankee Doodle," marched down town. In front of each of the principal cabins, we halted, marched, manouvred and countermarched, fired a ratling volley in honor of the day and passed on. The principal mercantile house in Fort John is called the "Last Chance House;" facetiously so called by the proprietor, from the fact that when he commenced business here, he thought it his "last chance" in California. Here we fired several volleys, the fife played "Hail Columbia," and we gave nine cheers, three for Fort John, three for the "Last Chance House," three for the landlord of the “Last Chance," and then gave one good one in honor of the day to finish up with. Some of the boys got a couple of flat rocks with the two flat sides placed one on top of the other, and a quantity of powder between; this was exploded by means of a piece of safety fuse, and it made a terrible noise. We marched down the creek and up again, and then crossed over to the "Gilbert House," where we fired several volleys, and gave numerous noisy cheers in honor of the day, as well as in honor of "Gilbert" and the "Gilbert House." Whether the landlords "stood treat" or not, or whether any of the citizens of Fort John imbibed anything stronger than ginger-pop or soda water, we'll not mention in this connection; but if there was "anything stronger," "cocktails" or "sherry cobblers,” for instance, taken as a "corrective” of the stomach, let us excuse it, on the ground that the "Maine Liquor Law" .has not yet extended its protecting arm over the benighted denizens of this barbarous region, where men are allowed to carry a bottle or a jug in their hand if they choose, and no official superintendent of the public welfare, to make a descent upon him, and confiscate those aforesaid bottles and jugs because they may happen to have a little whiskey in them. Perhaps the day may come when "Maine Liquor Riots" may become known in these parts, when sharp-nosed policemen will invade the log cabins and little tents of the miners, keen on the scent to discover some concealed bottle of whiskey; but as there is no immediate prospect of any such a thing, and as Fort John has not become Portlandized yet we'll not anticipate. In the evening some thirty of us marched down to Fiddletown, a place six miles below here.

We had heard a heavy field piece as we thought, booming in that direction at several times that day, and as we approached the town it sounded heavier and plainer. We entered town "single file," the fife and drum playing the grand national air of "Yankee Doodle," amid long and loud cheers from the citizens. Down the main street we went to the other end of the town, where we wheeled about and came up again, halting ever and anon in front of the house of some friend or acquaintance of ours, to give three cheers. The "field piece" which we thought they were firing here, was nothing more than two heavy blacksmith anvils placed one on top of the other, with powder between; and when it exploded it made such a report, that as I was saying, we heard it at Fort John. A party of the Fiddletown boys got together in opposition to us, and marched down the street, with five fiddles in front, by way of a "band," and styling themselves the "Fiddletown Doughheads." As the two "bands" passed, each tried to drown the music of the other, but in vain did the combined catguts squeak. Our fifer with protruding eyes and distended cheeks, blew his shrillest blast, while our ambitious drummer put in his prettiest licks. The fiddlers were nowhere; they lost their tune completely, not being able to hear their own fiddles. The "Doughheads" gave us three cheers, which we returned with interest. They acknowledged themselves beaten and agreed that we "laid over them heavy." In front of the U.S. Hotel we came to a final halt, gave three cheers for Uncle Sam, and dismissed for supper. The gentlemanly landlord of the U.S. Hotel served us with a capital supper, to which we did ample justice, after which we took a turn about town to see the sights and fashions and our acquaintance. About twelve o'clock the roll of the drum called us together, and after marching down street and up again, we marched out as we came in, to the tune of Yankee Doodle, amid the cheers of the citizens, who all acknowledged that "Fort John had fairly taken Fiddletown." We got home safe and sound at about daylight in the morning, well pleased with our excursion.

Fourth of July: “Independent day;” day ever to be remembered while one single true American exists, or a son of liberty lives to commemorate it. Anniversary of American independence, many, infinitely happy returns to it. Anniversary ever dear to the American heart, bringing our thoughts to revert back to the “memory of our Pilgrim Fathers,” and of those men of a later date, Washington, and the heroes of ’76. Year after year through endless centuries, may it ever be with us, to remind us that –

“The star spangled banner, in triumph still waves,
O’er the land of the free and the home of the brave.” 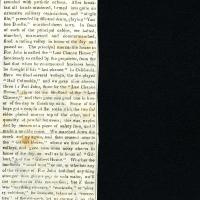