VIRGINIA DAILY UNION: Notwithstanding the pressure of hard times consequent upon the lamentable stringency of the circulating medium, we Comoites manage to retain our usual salubrity of spirits, and when occasions requires wax jolly and even festive over our present and future prospects; empty pockets not preventing our having dances, musical soirees and little social evening parties as usual, the cares of wealth troubling us but little. In regard to grub we are all right, for we have three butcher institutions all in full blast, and in their mad competition "bearing" mutton chops down to eight cents per pound; of this article we have an abundant supply for some time to come, as there are seventeen hundred fat sheep being herded in the hills near town. Of pine nuts, however, there is a great scarcity, the crop having almost entirely failed this season. What few there are will soon be ripening, but will probably fall into the hands of a few unprincipled monopolists, who will "bull" them up to famine prices.

An individual with a rosy proboscis and registering his name as James Martingale, from San Francisco, was here a few days ago, and although Sam. Nason and myself pumped and pried into his business all we could, we utterly failed to discover what he came here for. He wandered about all day, looking at the mining operations, and asking all sorts of questions with reference to the prospects, etc., and when he left he carried off a large sack full of pieces of quartz which he had collected from all the prominent claims. He seemed to be "flush," for he showed plenty of money, but he was undoubtedly deranged, for he ordered chicken, oysters and wine for dinner. He was remonstrated with in a kindly manner, but he would have it. Next morning he offered a twenty dollar gold piece to pay his bill with, but not being able to change it, we just quietly seized it with the bill, and he left perfectly satisfied.

Our mines are still being actively prospected, and in a concentrated and systematic manner. The Dayton Company, on the Montgomery ledge, have their big shaft now down to the depth of 130 feet, and have just struck the outskirts of the ledge. They will, however, have to go down some 20 or 30 feet further before they get into the main ledge; they are now running in a mixture of quartz and porphyry, and the quartz shows very flattering indications of the close proximity of a rich ledge. May they realize all their most sanguine expectations! The Amazon Tunnel is also still being energetically driven ahead, and must sooner or later prove a most valuable investment to the fortunate shareholders, for it will strike the Walker, Montezuma, Shiloh, Sharon, and other ledges at a great depth, besides the immediate ledges belonging to the company. The shaft of the Monte Del Rey is 200 feet deep, and from the bottom of it they are drifting east and west to strike their ledge running both night and day with two sets of hands. Symonds & Buckley, on the old Goliah ledge, at the depth of 100 feet have struck a heavy stream of water; they have quit sinking and are trying to drift to their ledge, but so much water renders their progress exceedingly slow and difficult. The Comet Company, on the same ledge, have their big shaft still energetically going down, and they have struck some very fine looking rock.

Since election politics has quietly simmered down, but still we are looking anxiously forward to the campaign now about opening, and will soon marshal our forces in the shape of a Lincoln and Johnson Club. The "unterrified" are also already organizing, for they hold a meeting for that purpose to-night. The results of the late election in all parts of the Territory was so unexpectedly favorable to them that they feel very confident of being able to carry their ends in the coming contest. In this, however, they will reckon without their host, for they will have to meet the Union forces aroused, united and ready for them. Lyon county went Union, notwithstanding the split which existed in the party at the late election. We will have no split this time. "United we stand, divided we fall," and woe be to the man or men who shall in any wise cause a split in the ranks, for their traitorous heads will also get split by the outraged community. So mote it be. 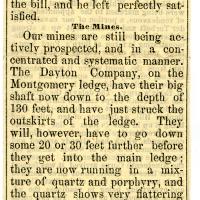