VIRGINA DAILY UNION: Thinking perhaps a letter from your old correspondent would be acceptable, I write you the little news within my reach. Within the last three months, times here in common with all the rest of the Territory, have changed, and Como has had to share in the general depression. Stocks in the rich claims on your far-famed Comstock have gone down way below zero, and just in the same ratio have all the other good "feet" gone down. Perhaps the end is not yet, but it certainly can't be far off, there being little room for any further depression. We never yet have arrived at that Elysian state of affairs known as "flush times" in this district, but, on the contrary, of late the "circulating medium" has become so utterly stagnant that a man with five dollars in his pocket is looked upon as a heavy capitalist, and twenty dollar gold pieces are only spoken of by the "oldest inhabitants" as among the things of the past.

The consequence of the aforesaid stringency in money matters is, that several of our whisky mills have had to quit running, not being able to credit their fellow-citizens for any more "tangle leg." Our quartz mill has been running by fits and starts, like a balky mustang, prospecting rock from various claims, with generally good results, but it is now again lying idle, waiting for something to "turn up." I am informed that negotiations are being entered into whereby it will again be started in a few days, permanently. This is as it should be, for that is too valuable a mill to be kept still while there is rock in the district that will pay. We have many good ledges which are in process of development by means of big shafts and long tunnels, which, at heavy expense, are going after the pay ore at a great depth, and this fall our mill must be grinding out the bullion from some of them, for it is there.

The Dayton Company, on the Montgomery ledge, have their new double working shaft now down to a depth of about 100 feet, and under the present efficient superintendence, the work is being energetically prosecuted. The ledge will be struck within 200 feet, and at that depth good pay ore will be found, for at the present depth a quantity of the rock has been crushed at the mill which yielded $20 to the ton. The Altamonte Company, on the constitution ledge, are also driving their tunnel vigorously forward, and it is now in about 460 feet. The Amazon tunnel is 180 feet in length, and will soon cut the first ledge of the series which this tunnel will penetrate. Near the Amazon, a New York company have also a series of good ledges, which will be cut by means of a tunnel at the depth of from five to eight hundred feet. This company is composed of men who are possessed of the greenbacks in goodly quantity, so that nothing will be lacking on the score of capital, to speedily make it a highly successful and paying institution. The Rappahannock Company are sinking the largest shaft in the district, which is now down to a depth of 100 feet, and it will be 200 feet before they strike the ledge. At 180 feet in their old incline they struck ore last winter which is unmistakably rich, and preparations are accordingly being made to work the claim in a thorough systematic manner. This noted ledge is one of the best, if not the best in the district. The Union Company—first south of the extension—are also sinking a new working shaft, which is now 117 feet in depth, and a splendid piece of work, very neatly and thoroughly timbered. This claim is just as good as that of the Rappahannock Company, and has the advantage of a perfectly safe and good property.

Notwithstanding the hard times, J. D. Cross, the popular landlord of the National, continues to take in strangers and provide for them in his usual handsome style, and no one who has ever partaken of his hospitalities will dispute that "he can keep a hotel." The Como brewery, too, still continues to produce that same perfect article of lager which so captivated and engaged the attention of "Mark Twain," when he was over here, and the remarkable qualities of which, if better known abroad, would be more fully appreciated, and bring it into free use in every well regulated family.

Our newspaper, the Como Sentinel, on account of the presence of hard times, thought it best to move to Dayton. I sincerely hope it may be pecuniarily benefitted by the change, and it may have been good policy removing thither, but, whether so or not, time will tell. Dayton, just now, has the advantage in being the County Seat; but just let a goodly flow of greenbacks set in toward Como, and we can easily discount the County Seat, in the way of prosperity. "So mote it be." "We may be happy yet." A. D. 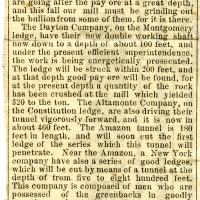