VIRGINIA DAILY UNION:--We are having a storm here to-day, by way of variety, and we have needed it, for it has been one unvarying round of naught but sunny skies, and spring breezes, which in the course of a few years might become, perhaps, monotonous. For days and weeks together, the fresh spicy breezes have gently wafted themselves to us from the purple distance of the lovely valley of Walker river, loitering, ever and anon, in their winding way along the mountain sides, to play among the evergreen boughs of the groves of waving pines. Ah ! why could not such lovely weather last always. But then the all-wise Creator has ordained that with the human race, "variety is the spice of life," he has accordingly seen fit to give us fair and indifferent weather by turns and promiscuously. Thrice welcome are these storms, for the springs are getting very, very low, and we want more mills. Blessed be the storms of the snow and rain, for they are very efficient for laying the alkali dust of the plains, and without them the eternal sage-brush would wither, pine away and die. But, "sufficient for the day is the evil thereof," and, although the present drouth in California and in this Territory may continue, and the present season may prove the driest ever before known, yet we'll rejoice and be jolly over the good supply which we yet have on hand, and trust in the Lord for more.

The Mill and the Mines.

Our mill has kept up an incessant thumping and grinding of the far famed Whitman rock, since it started, until yesterday, when it stopped, and the first clean up, under the present management, was had. It has probably turned out very well, but how well, will be known in due time. The most prominent mines are now all being worked, and sinking down into the bowels of the ledges is the order of the day. Loafers are few in Como. They are "played out." We are all at work, and earnestly bent on proving to you of Virginia that our mines are fully as good as yours. You have rather got the start of us; that's so; but we shall catch up with you in time. We do not expect any sort of a Reese River rush here, for we are too near home for that. Our mines must come up in the public estimation on their own merits alone. Many strangers have appeared among us of late, and most of those who come here stay; but still their number is quite few in comparison with those who are now emigrating to the far-off country of thin rich ledges and enhanced distances—Reese River. Hundreds are every day leaving California, with their trunks packed and marked for "Reese River;" not once dreaming that perhaps they may find better mines nearer home. And onward they rush, looking neither to the right nor the left; but as they come over the snowy summits of the Sierras, far away in the blue distance they seem to see their land of promise gleaming brightly in their deluded imaginations, with big streaks of silver and gold. Well, bless them, let them go, and when their golden dream is passed, and they return weary and disappointed, we will show them better ledges here, and a thousand fold better advantages for working them, than ever existed at Reese River.

Last Monday morning, John Otto, otherwise known as "Capt. John," was accidentally killed in the shaft of the Emblem. He had let off a blast, and in venturing down too soon, it is supposed that he became suffocated by the smoke or foul air, and fell out of the rope in which he was slung. He fell about fifteen feet. When taken out he was alive and could speak; but his skull was badly fractured, and he was otherwise seriously injured, so that he died in half an hour. He was a native of Pennsylvania, and aged about forty-three years. Although he worked hard every day, wielding the pick, he used to be a man of note in public life in California, and figured in 1854 as the clown in Lee & Bennett's Circus. He was a good gymnast, and figured in the bills as "a fellow of infinite jest." He was at one time reputed to be worth some thirty or forty thousand dollars, but gradually he became reduced in circumstances until we find him here, swinging the pick for a livelihood; and at last, he whose gymnastic exploits and grotesque witticisms excited the admiration of thousands, now lies a mangled corpse. We have buried him in our little graveyard, where the evergreen pines stand sentry around him, and the fresh breezes of spring, sweeping through the sage-brush round the rugged sides of Mount Lincoln, are singing the miner's requiem. In a narrow shaft, in his last "claim," John Otto, and his troubles and trials, repose forever.

Let his faults be buried in his tomb."

The Amazon Tunnel, of which I have spoken in my former letters, which will tap many of our richest ledges at a great depth, is very steadily driven forward, night and day, by two shifts of hands, under the efficient management of Mr. Weston, the superintendent. The tunnel is a splendid one, and is in now fifty feet; it will probably strike the ledge belonging to the company in about 80 feet further. This may turn out very good, for the croppings assay $60 to the ton, and it is a large ledge. A fine substantial car is now building, which will be placed on track in the tunnel. Stockholders in the Amazon Tunnel can rest assured that everything goes well. The treasury is in a healthy state, the work is progressing energetically, and the scheme itself is one of the "good things" of the district. I speak impartially in regard to it, for I don't own any in it, although I expect to be able to trade somebody out of a few feet of it, one of these days.

The Rappahannock and Union.

The Rappahannock continues to yield lots of rich ore. It is a very rich mine, and I understand that steam hoisting works are soon to be erected over the shaft. As soon as the ledge was found to be rich, the claims near it tried hard to prove it to be a portion of their claim, but were unable to do it, and never will. The Union Company, on the same ledge, is also being worked, and a large double working shaft is being commenced, which will strike the ledge at a great depth, when it must undoubtedly prove very rich.

The inhabitants of Como are as much given to mirth and joy as ever, as the frequent dancing parties and evening raids to our little sister town of Palmyra, lately, can well attest. Mr. Terrill and his omnibus are always at the service of the ladies on such occasions, and he gallantly transports them to Palmyra and back, in a highly efficient manner, free of cost. St. Patrick's Day was celebrated, yesterday, in grand style. Several of the sons of "the green isle of Erin," got pretty tight. In fact it will take a day or two longer for them to get sober clear through. At noon we fired three or four dozen guns in honor of the day, which was done by means of anvils, placed one on top of the other, with powder confined between, and fired by means of a train and a hot iron rod. During the afternoon the Como brass band paraded the streets in their splendid band wagon, drawn by a fine team of blooded stock, belonging to Alexander Korn, Esq., of this town, and by him kindly loaned for the occasion. These fine animals were tastefully decorated with spangled nettings and plumes, and, together with the band wagon, were, indeed, a fine turn out. The band played many soul-stirring national airs, and in return were treated to much lemonade. The festivities of the day wound up with a grand ball at Cross' Hotel, which it is impossible to beat, anywhere. The music was by the Como quadrille band, consisting of four pieces, of rare talent, and great equanimity. The attendance was full, and the ladies all wore their prettiest dresses, and sweetest smiles. It is useless for me to try to describe the "gay and festive scene," or the glorious supper. I can't do justice to it. This ball was for the benefit and in aid of the "Como Sentinel," the newspaper about to be started here, and netted quite a handsome sum toward the enterprise, as the ladies furnished the supper free, and the band played free of charge, for which they have the individual thanks of 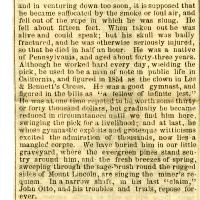