Our Mills and the Mines.

VIRGINIA DAILY UNION:--All goes well in Como. Our mill is now running steadily, regularly, and well, both night and day, and will soon be producing those glistening "bricks" of which I have so often written in anticipation. It is running at present on Monte Cristo rock, which yielded in the little prospecting battery attached to the mill, sixty dollars to the ton. When they clean up I will tell you how the big batteries make it turn out. It is, most undoubtedly, a rich claim, but we have many others in the district which are as good, and, perhaps, better than that. A large number of our ledges are being vigorously prospected, and several are taking out fine ore for milling. The old Shiloh is now showing out its true worth, in the shape of plenty of ore which shows for itself on the dump. The shaft is over one hundred feet in depth, and the ledge is a very firm, sound one, of four and a half feet in thickness. It has been a small ledge thus far, but is increasing; and when the water level shall be reached, will probably be much thicker and very rich. But in making mention of the ledges about Como, I would not wish to neglect those around our little sister town of Palmyra, which are no-ways inferior to those of the balance of the district. The Union, Orizaba, Rappahannock and Occidental are taking out splendid ore, and their shaft houses and hoisting arrangements are of an excellent order. The Odd Fellow, on the Crittenden and Banks ledges, is also classed among the best, as well as the Chicago, War Eagle, and several others. Near us, too, in the Indian Springs District, among the choicest claims we have the Minerva, Prima Donna, White Point, Virginia, and others, to say nothing of the rich and far-famed Whitman ledge.

As a matter of course, just at the present time, the all-absorbing topic of discussion, aside from the mines, is that delectable Constitution, which on Tuesday next is to be voted upon by us, individually and collectively. Strong are the arguments for and against it, but those who argue in its favor, constitute a very weak minority now, and what few may possibly go for it, are of the extremely dogmatical order who don't like to change their ideas after having once expressed them, even though they may afterwards clearly see that they are in the wrong. They like to "stick to it," like the man who, in a certain horse case, swore in Court that the horse in question was "sixteen feet high," and, on being reminded of his error, still stuck to it; declaring that if he had really sworn that the horse was sixteen feet high, "be d--d if he wasn't so." They class all who are against the Constitution as "Copperheads," utterly ignoring the fact that among their own ranks are several prominent Secessionists. "Birds of a feather," &c. If they will train in such company, they can. "Of two evils, choose the least." Secessionists for, and Copperheads against, the Constitution. Then too, all those who were of the Constitutional Convention say they will go for it, on the principle of harmony, although ten of them voted and did all they could against that mining taxation clause. Assuming that they were sincere in their ideas, and really meant what they said and did at that time, believing that they were acting for the best interest of their constituents—the people—how dare they now turn round, and vote for that which they condemned as unjust, and declared to be wrong. Can they conscientiously do it? Will they do it? Brother miners, watch each one of those ten, who in the Convention stood up for your rights, and if they now repudiate you and your rights, mark them well, and remember them. Consistency is a jewel.

Last evening Messrs. De Long, Fitch and A. B. Paul, were here, and addressed a grand mass meeting of the citizens of this District. The spacious hall in the National Hotel was crowded to overflowing, and the eloquent speeches of Fitch and DeLong, as well as the good sound statistical sense of Paul, were listened to eagerly, and received with thunders of applause. They were talking to the bone and sinew of the community; men who could understand and fully appreciate what they had to say. The hard-fisted, hopeful, prospecting and hard-working miners were there. Fitch called for the "ayes" and "noes" on the Constitution question. The small dogmatical minority, feebly shouted "aye," which was immediately drowned and forgotten, in the grand and almost unanimous shout of "NO" that followed it, and expressed the true sense of the meeting, which finally adjourned, after giving three hearty cheers for the "Old Flag." During the past week big spread eagle posters have announced to the public that Edgerton, Larrowe and Worthington were coming here, and would address a "grand mass meeting" of our citizens this evening, in favor of the Constitution; but it is now long past midnight, and they haven't yet arrived. So that mass meeting proves a grand fizzle. Will, they may as well just stay away. They would bring their pigs to a poor market. It's not worth their while coming up here for the slim prospect of votes they would get. They, and all the others who are longing for office under the new Constitution, meet with no sympathy among us miners. So, they want to tax our undeveloped mines to support them in office, do they? A jolly idea! It may be fun for them, but it's death to us, and we have come to the conclusion that the "fun won't pay for the powder." Every cent we can rake and scrape now has to go for grub and assessments, and we can't keep even at that. The idea of grinding money out of us to support a lot of office seekers is altogether out of the question, if we know ourselves, and we think we do. It certainly is much to our advantage to remain as we are—a Territory. As a matter of patriotism, it is our duty to do so; and what we would have to give to support a State Government, we can give to the sanitary fund, if we please. It is quite possible that Uncle Sam may take a notion to tax these mines. Of that we prefer to run the risk; and, even if he should conclude to do so, in order to assist in paying the expenses of putting down the rebellion, well and good; it will eventually accrue to our benefit. But the mines will not be taxed. In two or three years from now, there will be hundreds of well developed, paying mines in this Territory, and from the proceeds of them, a princely revenue can be obtained, sufficient to support a State Government on as grand a scale as we may desire, and have plenty left for Uncle Sam besides. So, let us wait till then, and be contented with the good and sufficient free government under which we are now getting along so prosperously. Let us "let well enough alone." A.D. 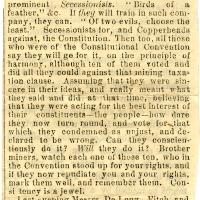