Our Towns and Other Towns.

VIRGINIA DAILY UNION:--Having but just returned from your portion of Silverland, I could not help comparing the resources of this district with those of the older localities, and Palmyra suffered none in the comparison. To be sure, our mines are not developed at all compared with those of Virginia and Gold Hill, and our houses are not so close together; but we will soon prove to you that our mines are noways inferior, and Como will soon be a powerful rival of even Virginia. The little town of Palmyra, too, must also rise in importance until it was assume the same position in relation to Como, that Gold Hill does to Virginia.

This district has rapidly come into favor during the past season, upon its own merits alone, for we have plenty of ledges here, and good ones too. Many of them have already been tested under the stamps of our new mill, and found to be even richer than was anticipated. We have no wild-cat claims here; we don't have occasion to use the article, having plenty of well-defined, good regular-paying ledges. In regard to some of them, we shall soon be able to tell you stories of their richness that will cause your optical organs to project, and we shall show you the "bricks," too, in support of our position.

Hon. Henry Edgerton is at present honoring Como with his august presence, and to-night sweetly snoozes in one of the comfortable beds at the National Hotel; but although the accommodations there are hard to beat, yet I'll bet he sleeps no sweeter or more comfortable than we did at the Robert's House in Dayton, or at Vesey's Hotel at Gold Hill, both of which houses are kept in a highly creditable manner, by very gentlemanly landlords. But then the traveling public know all about that.

Gold Hill and its Mills.

We also took a passing observation of the numerous thumping, groaning, and squeaking quartz mills about Gold Hill, which seemed eternally striving with each other to see which could make the most noise, especially about noon time, when for the space of two or three hours they blew twelve and one o'clock whistles, in a manner highly bewildering to a stray Comoite, and perfectly regardless of either time or tune. I think each one of those mills must keep the "mean time" of Gold Hill. And then, too, that mulatto-colored stream, which goes winding laboriously down the canon, after being beaten to death, and torn, smashed and ground in all the mills, until I wondered how it could ever freeze together again. It does freeze, though.

But the best mill anywhere about that locality, is the Rhode Island mill, both as regards perfection of plan, details of workmanship, and general substantiability. The machinery and everything about it, works like clock work, and with one-half the noise and clatter of the other mills. It is a large building, intended for a twenty-stamp mill, but at present only ten stamps are run. It is the intention of the proprietors, in the spring, to double the number of stamps and pans, and add another boiler. The engine is 40-horse power, and a hundred and twenty tons of rock is crushed in this mill weekly. It never has to stop on account of breakages, as is the case with the many less complete and substantial mills. It runs ten seven-foot pans. The neatness of the interior arrangements are only equaled by those outside. The premises are finely graded and laid out, and the retort house, company's office, etc., are all models of neatness and good workmanship. Taking it altogether, it is a model mill, and as it should be, it is paying its proprietors very satisfactorily for their enterprise. It is running at present on Gould & Curry rock.

We also took a look at the splendid steam hoisting works of the Bullion Company—a very costly institution; useful as well as ornamental. Their shaft is three hundred feet deep, but I understand they have no ledge as yet. They show plenty of taxable property above the ground, but it would be a sin to tax the mine also, or rather the shaft.

The best thing we struck in Virginia, was Morton's cider mill, on B street, where we were given unrestricted liberty to "pitch in and help ourselves." We had cider "till you can't rest." It is a healthy, delicious drink, and reminded us of the time, in years past, when we used to suck the article through a straw, thrust into the "spile hole" of a barrel, in our old home away "down East." Suck-cess to Morton and his cider. If the people of Virginia would drink more of that cider and less rot-gut, it would improve the health and morals of the community very materially, until in course of time society there would become as quiet and peaceable as that of Como.

Our mill here has been running pretty well for the past week, having to stop occasionally to adjust some of the minor details, but to-day it commenced to run regularly. They crushed twenty tons of rock from Orizaba No. 2, last week, which yielded over $20 to the ton. This turned out much better than was anticipated, as much of it was surface rock, and none of it selected, but taken at random from the dump. The shaft is only some fifty feet in depth. The mill is now running on rock form the Red Del Monte, and will crush Monte Christo rock next. The Shiloh, Montezuma, Live Oak, Wagram, Chicago, Savage, Palmyra Consolidated, and other good claims, will all contribute in turn.

We are to have a local newspaper, as you are aware. It will of course be devoted to the interests of this district, as well as to the mining and general public interests at large, and will be a desirable paper for our flourishing town.

Goldbaum & Co. have just finished a fine, two-story building, which is called the "Bank Exchange." The lower part contains a billiard saloon and a store, and the upper part is a fine hall for dances, public meetings, etc.

The Union and the Constitution.

The sudden change in the tactics of the VIRGINIA DAILY UNION, in regard to the Constitution, has created considerable talk among us—many censuring it, while others contend that its views are perfectly sound, and that the best policy under the existing circumstances is by all means to defeat the Constitution. I sincerely believe that it will be defeated; yet I cannot but feel a pang of regret that such a good Constitution as that is should be rejected by the people, and defeated just because of the blundering folly of the framers of it, in putting that clause into it—taxing the mines. They ought to have foreseen that it would combine the loyal mining interest, as well as the copperheads, against it. There were ten sound-headed men in the Convention who voted against that clause, and they showed much wisdom in so doing. Seven wise men saved Sodom, but ten wise men couldn't save that Constitution. The majority voted them down, and that delectable majority may just thank their own stupidity if the Constitution is defeated. One good result will follow its defeat: It will tell the General Government, in unmistakable terms, that we don't want our mines taxed—at least until they are developed, and can stand taxation.

But still, that Constitution may be adopted; and in view of that contingency, we must endeavor to elect good men to fill the various State offices, and especially for members of the legislature. Form Como we shall send Charles A. Witherell as our unanimous choice, and will support Judge Wm. Haydon, of Dayton, for District Judge. 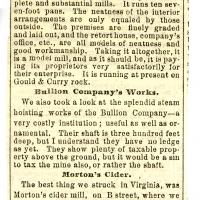