[Correspondence of the Virginia Daily Union.]

For the past week, the usual equanimity of our flourishing community has become somewhat disturbed by the excitement consequent upon the discovery of another rich quartz load some two or three miles from town, near the head of Star Canon, just within the borders of Indian Springs District. The ledge shows heavy croppings of a soft, chalky, porous rock, with purple spots and streaks running through it, and of a nature entirely different from the rest of the ledges of the District. It is said by those who pretend to know, that it is just like the rock in the claim at Gold Hill known as Gold Hill Proper. The ledge has, within the last year or more, been located by various parties, but the rock looked so unpromising that no one ever cared to work it, until Sunday, the 29th ult., when Mr. J. C. Murphy and others took a notion to try it. They roasted some of the rock, and were somewhat surprised to see the silver come out in little globules all over the surface. Of course they secured the claim at once, and a careful assay of the rock at the assay office of Mr. Solomon gave a return of over two hundred dollars to the ton in gold and silver, principally silver. Several other assays showed not quite so rich, but still very satisfactory, and, as a matter of course, extensions upon extensions have been taken up; and any one that does not possess "feet" in the "White Point"--as the new discovery is called--is deemed highly unfortunate. It is believed by many to be a portion of the far-famed Whitman Ledge, which, I see by the papers, crushes at the Sacramento Mill a hundred dollars to the ton. The Great Eastern is the name of another big ledge recently discovered some seven miles from here, on the trail to Fort Churchill. It shews immense croppings which can be traced for three miles, and from some of the rock globules of silver can be roasted out in abundance. It is undoubtedly very rich. It was discovered by some of the German residents of this town, and is owned and worked exclusively by Germans. A few feet in the Great Eastern would be very acceptable to almost any one. Four days ago we took a tramp in that direction, that our eyes might be gratified with a view of the redoubtable Great Eastern. A certain long-legged Attorney of this town, was our pilot. We went round by the Constitution ledge, stopping as we passed, to take a look at the Altamonte, Buena Vista, Banner, and other noted tunnels, running into the ledge, often diverging from our course, in order to prospect some promising looking croppings and "indications." Over the rough hills and across the deep gulches, our long-legged pilot led the way at terrific pace. We tried hard to "follow in the footsteps of our illustrious predecessor," but his footsteps were too far apart, and what with his long legs against our short ones, it took all the sail we could possibly crowd on to make even a respectable stern chase of it. But we "saw the elephant"--the Great Eastern--and when night overtook us on our way back, it found us faint, weary and alone--our pilot having long since disappeared--three miles from home and just able to crawl. But we were all right, for we came to the cabin of J. Eaton, our brother miner and a true Christian gentleman, who, in full appreciation of our "fagged out" condition, treated us to a loaf of warm bread and butter, considerable boiled beef, and some hot tea. When he dies--which I hope he never will--may the blessing of the hungry waft his soul aloft to dwell in Paradise forever. Considerably recuperated, we took leave of him, and over sage-brush and rocks--for it was too dark to see the trail--up hill and down dale we pursued our weary way; bah! the "road over Jordan" is a fine turnpike to the one we traveled. Two hours after dark we arrived home, hopelessly crippled in body and sole for the next four days, with two blistered heels and bloody socks. There I found my pilot sitting before the fire, with those legs cock-billed high above the mantel-piece, quietly smoking his evening pipe over the interesting pages of Blackstone's "Commentaries," apparently refreshed by his lice little walk. But " 'tis ever thus" with him. He can travel. What cares he for a crooked trail? He just steps across the crooks, and walks over rocks that I have to go around. And so it would be with the narrow way to Heaven; he could step "across lots" while I would have to go round; and while I would have to knock at the gate he would just step over the fence.

And now, while I am on the subject, in speaking of mines and mining, I will give you not only my sentiments but what I consider to be the sentiments of the mining community of this district generally, upon the subject of the taxation of the mines. The Constitutional Convention seem to deem it necessary to have all the mines taxed, more or less, and the idea may be an excellent one--it may be a splendid one--but the miners of this district can't see it, neither can our business men. The fact is, the mines are taxed enough already. Every paying mine that is opened costs enormously in the way of labor, time, money and materials. In that way these mines in this district have been taxed, until all who have been here any length of time are poor as church mice. To be sure, we are rich in "feet," which may one day assume the character of table property, but until such a happy state of affairs shall be proven by the regular milling process, we ask the benefit of the doubt. It isn't possible to fix a market valuation on undeveloped mines. Of course, you may see in the stock market report, every day, "Rappahannock, $40 asked," "Exchange, $20 asked," and every claim in the district could be easily represented in the same way, but, because a man to-day holds his Montezuma at $30, it is no sign that to-morrow he may not sell it for $5; and because he sells it at $5 you must not fix the market value at that, and tax it accordingly, for he might be troubled to find another customer who would buy it at $3 and pay the cash. And then, too, read the columns of the UNION, under the head of "Assessment Sales," and see the names of the delinquents that are troubled to raise the loose cash to pay their assessments, many that are actually required in the opening and developing of the mines. If more taxes are to be levied on top of that, how can a poor fellow get along? Again, every certificate of stock that is issued or transferred is taxed to the amount of twenty-five cents, in the shape of a revenue stamp, which most certainly goes to the support of Government, and you know these certificates are more numerous than Dayton flies in summer. Wild cat and all has to stand the tax in that way. And then, too, there are many claims, the Altamonte, for instance, stock in which is selling at $10 per share, and all there is to show for it is a 400 feet tunnel, with a strong prospect, some time or another, of striking a rich ledge, if they don't miss it. If there proves to be no ledge there, please to tell us the market value. There is one claim here that a few weeks ago sold at $7.50 per foot, cash. It is very, very cheap, now, for they never had any ledge at all in it. It went up on the wild cat process, and came down ditto. On another claim certain individuals, who believe in the "patience and perseverance" doctrine, have sunk a shaft and are running drifts each way in solid granite, strong in the delusion that there is a "rich ledge there, somewhere;" some of them wouldn't sell out their interests for less than $5 per foot; but to call that the "market value," and tax it accordingly, would be like taxing the chances in a game of "bean poker." Only last week, too, a sale was effected of ten feet in the Juniper, at $9 per foot, in lottery tickets. Now there would be the same propriety in taxing the lottery tickets that there would be in taxing the claim. Some tell us we should pay taxes, same as the farmers and merchants have to do. They should remember that we help the farmer and merchant pay their taxes in every sack of flour or potatoes we buy, and but for us farmers and merchants would be in small demand in this sweet country. No, our mines are taxed enough already. I voted for the Constitution of California, in the winter of '49, and hope to vote for the Constitution of Nevada, but with that clause in it taxing the mines, I tell you it will not be accepted by the people of Nevada. The miners will be apt to think we can do better to remain as we are, a Territory. In about five years from now, when we will be having some net proceeds in the way of dividends to pay taxes with, then it might do to tax such "net proceeds," but any other method of taxing the mines is decidedly objectionable to many others, as well as to A. D. 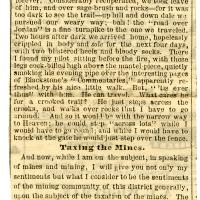