VIRGINIA DAILY UNION: —At the present writing, things here have a decidedly wintry appearance, but we have the consolation of being able to look across the valley at your elevated locality, and see that you also are enjoying the same snowy surroundings. I should rather say that we look down upon you, for Como is elevated many feet higher than Virginia, which may account for the fluctuating vagaries of the present "spell of weather." We have it in all sorts of variety. In the language of the poet, "first it blew, then it snew, then it thew, and then it frizz." —which latter position we hold at present, with a fine prospect of more snow. "Now is the winter of our discontent," is one of the remarks of the immortal Shakspeare; but lack of blankets, scarcity of funds, and poor credit, was probably the occasion of such an uncomfortable idea on his part. But we of Como don't apply the remark to our case, for this is the very winter that is to bring out our thriving district to the notice of an admiring world.

To-morrow the echoes from the pine-clad, snowy hills around us, will for the first time be awakened by the shrill whistle of that big mill of which I have so often written, and upon which the future of this district mostly depends. That whistle will be hailed with joy by hundreds of hopeful hearts, who have long toiled, and waited patiently the results of their labors. Day after to-morrow the small prospecting battery of two stamps which is attached to this mill will start, crushing rock from the Monte Cristo ledge. This little battery will only crush about a ton per day. It is a perfect counterpart of the large batteries, with pans and all complete, and will be just a "foretaste of the joys to come," when the big batteries get into full operation, which will be in about two weeks.

Cross has just opened his crack hotel. He opened it with a "grand flourish" by inviting all the boys in to "drink and be merry" on the occasion. Of course the boys responded, and during the evening some two hundred or so registered their names in the big book, as "arrivals" at the National Hotel. The Como quadrille band turned out in full force, and did the music for the occasion, assisted by the celebrated bugler from the Como brewery, who kindly volunteered his services. Your correspondent, being possessed of large quantitites of "music in his soul," was attracted thither by the entrancing strains of elodious harmony, and sat and quiety enjoyed the thing to his heart's content. But the banjo player attracted our attention principally. He is a dark-eyed, melancholy "cuss," who seems to be eternally brooding over the sorrows of his youth, and desperately endeavoring to revenge all his imaginary wrongs, by picking and thumping the very soul out of that unfortunate old banjo. Well, perhaps it's a consolation to him, and far be it from me to begrudge him that poor boon. He has been crossed in love, at some time or other; or, perhaps, he is the silent victim on unrequited affection.

" 'He never told his love,' but feels it ever

At the core of a sweet apple."

I would recommend to him a diet of doughnuts and larger beer. Cross' bar is well stocked with the choicest liquors ever brought into this Territory, and it is fully sufficient to say that he gets all his lager from the Como brewery; lager, which for body and fine flavor, has no superior anywhere. The hotel is large, roomy and well ventilated, and is plentifully supplied with water from a spring which comes out of the hill in the rear of the hotel at an elevation which carries the water by means of iron pipes up into the second story. The rooms are all carpeted and furnished with the choicest of sleeping arrangements, and every convenience one could wish. In the third story is a large hall, 50 by 30 feet in size, which will be used for balls and parties, or a "corral," as occasion may require. The kitchen department is unexceptionable in its arrangements. The stove, or cooking range, is of the "Monitor" style, and with its complex arrangements of pipes, pans, and warming and steaming apparatus, reminds one of a young quartz mill. A mysterious sort of hot air pipe arrangement proceeds from it to a barrel of water in the corner of the room by which means the water in the barrel is kept boiling, and from it are pipes which lead to the sink, where the boarders wash themselves, and to other places where hot water is required. For perfection of plan, and general convenience and comfort, this hotel is not excelled at least by any hotel in Virginia. Cross is an experienced landlord and a gentleman, and far from being what his name indicates. His flag is the glorious old Star Spangled Banner; his sentiments are thoroughly Union, and his paper is the VIRGINIA DAILY UNION, which will always be found on his table, as it is in all other first class hotels. Success to the National Hotel; "long may it wave."

Among the mining claims in this district most worthy of mention is the Kremlin, on the Cash ledge. This is a "blind" ledge, showing no croppings, and was accidentally discovered about a year ago, in sinking a shaft. The ledge is well defined and upwards of eight feet in width, and is considered among the most valuable. It is to be seen on the map of this town, and by many it is believed to be identical with the celebrated Wagram ledge. They certainly run very near each other, and perhaps are the same; time will show. The shaft of the Kremlin is down to the depth of fifty feet, and forty pounds of the rock from this shaft sent to San Francisco yielded by the milling process sixty dollars to the ton. Assays have been obtained from it of from four to six hundred dollars to the ton. Sixty dollars under the stamps, however, is good enough. The Kremlin was incorporated on the 30th of last May, and the stock is held at ten dollars per foot, at present; but the anticipates results from the new mill, after it gets into full operation, will carry all good feet away high up in the hundreds. A.D. 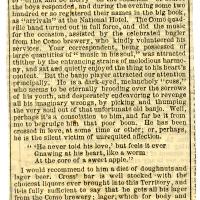