VIRGINIA DAILY UNION:—Night has spread her sable mantle over Como, but although it is ten o'clock in the evening one could hardly say that the citizens of our usually quiet town were all abed, to judge from the noise in certain quarters.

SOCIAL LIFE IN COMO—MUSIC AND LAGER.

Music fills the balmy air, and loud is the merry song, and full the chorus borne to our ears, from the "Como Brewery." A lot of "gay and festive cusses" are there congregated together testing the quality of that lager. The grand chief violinist of Como is with them; his ever happy grin wreathing his lovely dark countenance, and such strains as he is extracting from that old cracked fiddle would make Ole Bull or Paganini just shoot themselves, from pure envy. And then there is somebody down there concentrating his energies on a sort of post horn arrangement, and quite a "blower" he is, too. Well, as the prophet Joe Smith says, "blessed is he who bloweth his own horn; for whoso bloweth not his own horn, the same shall not be blowed; and whoso bloweth his own horn, the same shall be blowed with a vengeance." He and the fiddler are evidently playing against each other. They have had two heavy rounds at it, and are not "playing the rub." Go in! I'll bet on that old fiddle. "Merry feet are dancing" during the intervals of the songs, and the feast of music and flow of lager will probably continue a while longer, for I hear them now singing something about "we won't go home till morning." From McCumber's saloon can be heard the sound of the rattling balls on the billiard table, and the happy shouts of laughter from the crowd who assemble there to chat around the big stove and partake of a cocktail or so.

Well, now, if I have been anyways too personal in any of the foregoing remarks, I hope the aggrieved parties will accept my apologies. I must be careful how I joke, for I got into quite a scrape by reason of some inadvertent jokes in my last letter, regarding the "serenade" at Palmyra by the "Sage-brush Serenaders." One person, imagining himself aggrieved, came down personally on your correspondent in a volley of rough-shot language that made us tremble in our boots. We humbly agreed to make "all necessary apology," which we accordingly do, after having read the aforesaid letter over, and finding nothing worth apologizing for. We freely accept his apologies also, or "any other man," and promise to never joke again if we can help it.

I intend, in a future letter, to refer more particularly to the mines around that portion of the district as many of the richest ledges are located near there. The Rappahannock, Orizaba, War Eagle, Buckeye, Crittenden and the Union, are among the best. From a piece of rock from the War Eagle, which had been subjected to the action of heat, I saw the pure native silver smelted out, and covering the entire surface in coarse round globules. Many of these ledges have already been tested at Dayton by mill process, and found to be unmistakably rich, and now they are awaiting the erection of mills, to work them to advantage. The mill here in Como is very nearly completed, and I understand will commence testing rock from the various claims in a few days by means of the small prospecting battery, which will be run while the big batteries are being got ready.

Many of the claims which have been for some time lying idle, are now having the work started on them again. The Shiloh, for instance, is now getting out a crushing of rich rock for the mill. On the Dakota ledge, the Perkins & Arrington claim has a shaft down 120 feet, and have a ledge of rich pay rock, enough to supply a large mill of itself. The Montezuma, adjoining it, on the same ledge, has any quantity of rock which assays rich.

It is pleasing to see how completely the mining public are becoming undeceived with regard to the fading glories of Reese river. For awhile "distance lent enchantment to the view," and many an unwary speculator got taken in and done for—first, by being shown rich specimens from the numerous little, thin, two-inch ledges of that delectable region; or, still worse, they were humbugged by means of Gould & Curry, Savage, and other rich rock from Virginia, hauled out there and made to represent Reese River rock. It is indeed high time that such an unhealthy state of affairs should be "played out." All such things, sooner or later, find their real level, and have to stand on their own bottom—if they have any. Those who went from here to see the Reese River elephant, have returned, perfectly satisfied to get back home to Palmyra District, where, in their old claims, they have the assurance of fortunes, in the shape of good, well-defined, wide ledges of rich rock—ledges which show for themselves, and which are fast coming into the notice of outside capitalists and on the sound basis of true merit. The whole world will, in the course of a few months, hear of Palmyra District. A. D. 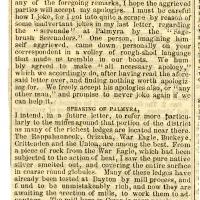