VIRGINIA DAILY UNION: The world still rolls on, and, as a general thing, Como still rolls with it.

which is being erected here is now fast approaching completion; in a few days the whistle will be sounded and even as the trumpet of Gabriel will summon the grave to give up its dead, even so shall the shrill whistle of this mill summon the various ledges to give up those hidden treasures of silver and gold. The big boiler is set in its place, the smoke stack rears its black form high above the broad roof, and the endless details of machinery and crushing apparatus are fast being placed in position.

We will soon be able to show you "whats what," in the shape of rich bricks of bullion, such as people need not rush to Reese River after. And mind you, these bricks are not to be taken from little, attenuated two-inch ledges, but from big, well-defined heavy ones; we don't use any other kind here. They show for themselves.

Many who have gone from here to Reese River have returned, or are going to do so as soon as possible, saying that although money is plenty at Reese, and in reality that there are many good paying ledges there, yet the chances are as good here, and probably much better, besides this being much the best place to live in as regards location, building facilities, wood, water, and society. One enthusiastic victim goes so far as to say that he "wouldn’t give ten acres of Palmyra District for the whole of Reese River."

BOASTING OF A BIG HOTEL.

Cross has got his big three story hotel now nearly completed, and the architectural finish of it is a credit to this or any other place. We have needed this big source of accommodation to the traveling public for some time past, for although Daniel's and the other hotels are good ones, yet their limited accommodations are totally inadequate to the demands of the constantly increasing travel. Cross possess all the qualifications considered necessary to constitute a jolly landlord in an eminent degree, and it is understood that he "can keep a hotel." We shall see.

The fine saloon of "Martin the Wizard," has now a powerful rival in the "Como Exchange"—a large well furnished saloon, now opened and kept by the fat and jolly McComber, who is a standing proof that his liquors are of the best quality, for he uses them himself, and is liable to live for a hundred years or more, yet, to judge by his hearty robust frame, and blooming complexion. He has a splendid new billiard table, with all the latest improvements, while around the walls of the saloon are suspended big pictures, finished in the gayest style, showing Mc. To be a lover of the arts, as well as of good liquors. The M. C. to his name signifies Member of Congress, but, although, he does not understand the modus operandi of preparing the "Wizard Cocktail," as prepared by the Wizard himself, yet he does make a cocktail that is as good as any Congressman ever drank, and the like of which would be tempting to temperance lecturers.

"JOE AND HIS LAGER."

Joe, of whom I wrote in a former letter, has not got his brewery in full operation, and produces an article of "lager" that is, indeed, hard to beat. The Silver City lager has always borne the palm heretofore, but Joe's lager discounts that, without half trying. I don’t know whether it is the extra quality of the water, or the pure air here, or the splendid scenery that produces such marked superiority, but somehow this lager of Joe's possesses a flavor and body that cannot be surpassed at any other establishment. By invitation your correspondent visited the brewery at various times, and tested the qualities of the first, second, and third brewings, and pronounced them relatively good, better, and first rate. Success to the "Como Brewery."

As to society here in this District, it cannot be excelled, either as to well behaved men, good looking women, or general sociability. We certainly do have capital good times here in the way of dances, social evening parties, music, etc., with no petty jealousies or aristocratic feelings to mar our pleasures. As to music, we have many excellent performers, and singers of varied merit.

Furnishes the music for all the dances, while among us are many who, although they have never displayed their great accomplishments in the vocal or instrumental line, on the theatrical stage before admiring audiences, are yet capable of astonishing people who "never heard the like." The principal glee club here, from a habit they have sometimes, of an evening, of going out and serenading, have acquired the name of the "sage brush serenaders." They are gentlemen of various talents and respectability; consisting of a lawyer, a stage driver, and a carpenter, and they can sing sea songs, negro melodies, and love songs, enough to melt the obdurate heart of a cobble stone.

Palmyra being only a mile from Como, the other evening they concluded to astonish the natives "of that quiet little town with a grand serenade." The main object of this serenade—the first one ever given in Palmyra—was to charm the ladies of that place, and especially the fair daughter of the keeper of the chief hotel of the town. Silently, cautiously the "sage-brush serenaders," gathered near the window of the sleeping maiden. Gently muttered were the curses, and vigorously bestowed was the small rock with which they quieted the fierce yelling of the retreating dog, that had mistaken them for Pi-Utes. And now, swelling clear upon the cool midnight air, as they stood in the calm moonlight, pealed the rich voices of the serenaders; sweetly rolled forth the voice of the brave soprano; high arose the voice of the agitated tenor, as he rose on his tip toes with excitement; the rich heavy notes of the tall bass swelled voluminously forth from far below his supper, and the three voices formed a combination of harmony, that to be appreciated should be heard. The song ceased. Was she awake. Did she hear the dulcet strains that were exhausting their sweetness on the midnight air. Oh! She must.

Again arose the united voices of the trio in richly blended harmony. Surely such strains would melt the heart of a flat-iron. Eagerly they watched the window of her bedroom. See! Look! Was that a match she had rubbed? Was it a light she had struck that caused the refulgent glow upon the window. No! She had simply opened her eyes, and was now conscious to the presence of the music charms which saluted her ears. The object was accomplished. She was awake, and listening to the dulcet strains now being executed, all for her. Your correspondent being in the vicinity also heard the whole thing, and unhesitatingly pronounces it a remarkable serenade.

A LETHARGIC LANDLORD AND AN OBDURATE BAR-KEEPER.

But how was it with the other inmates of the hotel? Did they hear it? The worthy father of the young lady knows how to keep a hotel, and like a good landlord lay soundly sleeping after the fatigues of the day, so soundly that he never heard the music at all. The "bar-keep" heard it, but it being a frosty night, and having "no music in his soul," he wouldn't get up and call in the serenaders and "stand treat," no, not he. In explaining the thing next day, he said he "heard it all, but thought they were come down there to 'shiveree' somebody" at first, but he at last came to the conclusion that they were "singing for the whisky, and be derned if he was going to treat on any such music as that." The other ladies of Palmyra were duly serenaded, and at Arnhold's the serenaders were called in and treated to an unlimited amount of lager, but as the most of the ladies serenaded were married, the interest of the performance was correspondingly diminished. The sage brush serenaders flatter themselves that the Palmyra ladies will remember this sweet serenade until next time. So you see, Mr. Editor, that we do manage to wring along, regardless of the blood-thirsty savage Pi-Utes. These Indians have got about through their pine-nut harvest, and nearly all left for Pyramid Lake and other parts. The district is perfectly safe, as far as they are concerned, and as to that matter always has been. A. D. 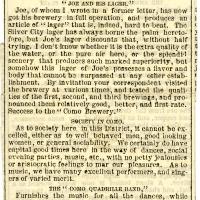