VIRGINIA DAILY UNION: —At the present writing Como is in a state of war, and the men of Como are out with rifle in hand, ready to do battle against the common enemy—the confounded Pi-Utes. Palmyra District, as you know, comprises quite a large portion of the pine timber land of the Pi-Ute nation, and as at present the pine nuts are ripe the harvest of them by the Indians is the order of the day—they depending upon them as one of their chief sources of food. But the encroachments of the white man, in his greedy search for wealth, has caused the country hereabouts to be appropriated to the use of the American public, and the consequence is the nut-pine has had to suffer. From time to time the Indians have remonstrated, and sometimes threateningly; so much so as to induce some timid ones to flee from fancied danger. At this present season, however, the Indians are more in earnest than ever, in the fact that the District is attracting much attention—mills are being erected here, and, as a matter of course, the pine tree must soon be destroyed. Winnemucca, with an interpreter and his braves, were here last Monday, and told us we must cut "no more green timber, until a treaty is made," or some other arrangement made whereby they might be indemnified for the loss of this timber and pine nuts. A very reasonable request, considering that they agreed that we might use all the dry, dead timber we wish for firewood, etc., of which there is plenty. For the last week there has been many flying rumors of war. But Indians have been gathering in in numbers, but as, of course, they have always done at every wet season in years before. Very few got much excited over it until about yesterday, when reports of threats on the part of the Indians were very currently reported. Along towards evening the topic of the day was warmly discussed, and some few of the most excited ones at last concluded to send for aid, as a flying rumor came to the effect that the Indians intended to attack and destroy the towns of Como and Palmyra that night. A messenger was sent to Dayton and from there a telegram was sent to Fort Churchill. Meanwhile a guard was formed, sentinels posted, many women and children were taken to the Wizard's big stone saloon and other places of safety, and such necessary precautions taken as were deemed necessary against surprise from the blood-thirsty, pine nut-eating Pi-Utes. The braves of course were on the Cindado. Their eyes were peeled and there was no earthly show in the world of a Pi-Ute, or "any other man" accomplishing anything in the hostile line. Your correspondent was down to Palmyra in the evening, and found the guards and sentinels on duty well armed with Uncle Sam's blue overcoat, a big rifle, a large hatchet, and a tremendous knife. The women were cool, unterrified, and not much nervous. Palmyra being safe, we came back to Como solitary and alone, but with a small piece of scantling about seven feet long in one hand ready to massacre any bloody Pi-Ute that should dare assault the reporter of the UNION from behind the sage brush. Como being also safe, we went to bed,

"To sleep, but not to dream

The telegram to Fort Churchill was received at about 6 o'clock P. M., and in just twenty minutes, twenty men from company D, under the command of Lieut. Jewett were mounted and on their way for the seat of war, well armed with Sharpe's rifles and dragoon pistols. They took a rough, blind trail across the country, and, after a toilsome travel of eight hours and a half, at half past two o'clock this morning arrived at Como.

A squad from Dayton, under the command of Capts. Eagan, Warder, Acton, and others, arrived on foot about half an hour before the soldiers did, and affiliated with the rest of the guardians of Como.

When the troops arrived they found our brave forces ready to receive them with guns presented, aye, and cocked. They were ordered to halt and give account of themselves. They explained that they were honest "Linkum sojers" from Fort Churchill, come to rescue Como, and not Pi-Utes in disguise, upon which they were allowed unmolested to enter the town. So far all was very good, and although Como was safe enough before, yet the presence of these soldiers made safety double safe. What show was there for an enterprising Pi-Ute now? Tell me that.

The excitement of patrol and guard duty increased as daylight approached, which was not allayed by the occasional use of that kind of whisky which Rosecrans and Grant are said to make use of. At length the excitement reached its climax and boiled over. Some bodies saw each other, and thought they were Pi-Utes. The alarm was given by loud should of "turn out!" "Corporal’s guard!" "Turn out!" "why in h-ll don’t you turn out?" An excited butcher, aroused from his slumbers by the hubbub, grabbed his gun, with blood in his eye, and in trying to cap it, he accidentally discharged it, straight at the north star. This was enough. What few there were asleep bounced out at once to the rescue. But where were the Pi-Utes? Echo answers, Where?

The correspondent of the UNION was on hand, of course, as soon as he could get into his trowsers, and immediately seized his trusty jackknife, joined the assembled crowd and commenced taking items. Lieut. Jewett’s command stood calm and collected, and did not seem to understand what all the row was about; but this was owing to their ignorance. No more sleep in Como till morning.

Lieut Jewett's orders are to remain here, till the arrival of the Governor, who is expected to-day or to-morrow to arrange with the Pi-Utes. Well, seriously, this is as it should be. Give all their rights. Give even a dog his rights. Let us have a treaty with the Indians. They ask but simple justice and right, and are firm in their demands. They are right. But no more now. The stage is leaving. A. D. 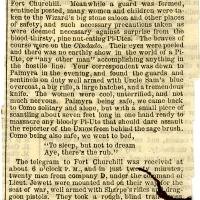