VIRGINIA DAILY UNION: Still boldly striding onward in the march of improvement, Como maintains her place in the front rank, and notwithstanding the great and increasing rush towards the barren regions of Reese River, whose thin, rich ledges, in the far distance, glow with the brightness of enchantment, our promising district receives a fair share of attention from the emigrating crowd, and every day brings us fresh accessions to our lively community. The greatest drawback we have to contend with, in the way of building up our town, is the scarcity of lumber, which we cannot get near as fast as it is required. We can have no churches yet awhile, as all the lumber that can be had is used for making whisky mills and hotels. An extensive brewery is now being erected, so that in a short time we shall be supplied with an A No. 1 article of "lager," better than ever before drank in this part of the Territory, if we may believe what "Joe" tells us, and we think we may for Joe is the same "Joe" who used to brew lager for the inhabitants of Columbia, California. However, we shall try Joe's lager, when he gets some brewed, and report.

Daniels keeps a good hotel in our town, and the traveling public will all find such to be the fact; his grub and liquor, and other accommodations being found unexceptionable, and bills as reasonable as could be wished. His boarders are all in fine order, and say Daniel "can keep a hotel." We have also a Lyceum here which meets once a week, on which occasion the "men of Como" meet in high conclave, and after solemn and soul-stirring debates, in which the eloquence of Webster, Choate, Demosthenes, or "and other man," are completely surpassed, the great and all-important question, connected with the public welfare are all finally and satisfactorily settled by these giant minds.

By the time of the next Presidential election the fame of the Como Lyceum will have become so widely spread that it will attract the attention of Old Abe, and he will probably select his next Cabinet from the members of our Lyceum.

Professor Pinkhan, from California, has been delivering a series of lectures here, during the past week, on the subject of Phrenology, in the course of which he examined the heads of the members of the Lyceum, and found their bumps to be of a splendid quality and hardly to be improved upon.

Gideon McCumber has just opened a fine, large billiard saloon called the Como Exchange. Just before moving into it he gave the use of it to the public for the purpose of having a grand ball. The public, of course, improved such a good opportunity and the consequence was that the ball of the season was gotten up and came off in gay style, and was highly enjoyed by all who participated. The very charming music of the Como Cotillion Band enlivened the light fantastic toe, lovely forms and happy faces whirled merrily through the mazes of quadrille, schottische, waltz and mazourka, and among the bright galaxy of female beauty which graced the occasion, the witching eyes of the belle of the district beamed the enchantment of her smile upon the captive swains, who "felt her magic power." The supper, at midnight, was given by Daniels, at his hotel, just across the street. The festive crowd seated themselves to a supper, the like of which was never before known in this part of the Territory, and which it takes Daniels to get up. All the luxuries and delicacies that could be procured were placed before his delighted guests, prepared by that prince of good cooks, "John, the barber," who, although a barber, is no barbarian, and, unlike John the Baptist, believes in something to eat besides "locusts and wild honey." Dancing was soon resumed, and the merry company, reinvigorated by the capital upper they had just partaken of, entered with renewed zest into the enjoyment of the "gay and festive scene."

"Music arose with its voluptuous swell;

And all went merry as a marriage bell."

The approach of day "told the hour for retiring," and each departing guest left the scene saying within themselves:

When there next doth be a ball

Well, we do manage to have some merry little times here in Como. The ladies are all lively, good looking and intelligent; and in fact, in the estimation of the men of Como, they are the finest lot of women in the Territory, and considerably above mediocrity. But then, any one coming here and viewing the pine clad hills, fine scenery, and rich mines of Palmyra district, must naturally become convinced that this is the place to live in and get rich. The pioneer mill will shortly get into operation, and rich results are confidently looked for. Other mills are also being contracted for, and will soon be on their way here. That they will all pay well there is no moral chance for a doubt, for the ledges assay rich, many of them high up in the hundreds, as, for instance, the Montezuma, a new claim just being incorporated, which assays one thousand dollars to the ton in the croppings at the surface of the ground. There are many which assay nearly as good as that. The Margaret White ledge, for instance, which belongs to the mill company—and many assay even better than that. But then, if they only average one hundred dollars to the ton, under the stamps, it is as good a thing as any one could ask. A. D. 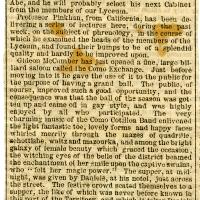