DANCING AND POLITICS IN COMO.

VIRGINIA DAILY UNION:—Yesterday was a jolly day for our thriving young city, and our streets were paraded by an extra supply of crinoline. The morning coaches brought us from Dayton a delegation of some twenty of the fair sex, who were out on a pleasure excursion to this place, and bent on having a good time generally. Of course their advent here was hailed with joy by all the masculines, for—

"Lives there a man with soul so dead,

Who never to himself hath said,"

Naught can the human heart beguile

At the residence of S. B. Hunt, Esq., they were received by his estimable lady and the other ladies of the District, and treated to a substantial collation, after partaking of which, and resting from the fatigues of their journey, they and their hostesses all repaired to Scammel’s new hall, which was gaily decorated for the occasion with evergreen wreaths and branches of pine, which, on the wall at the farther end of the building, was formed into the glorious word "Union."

Now, to say that the men of Como didn’t "go in" for the "Union," and with heart and soul, in the "gay and festive scene," would be a slander on the gallantry of the sex. Indeed, they did "sail in," and for two or three hours the happy assemblage tripped it on the "light fantastic toe" to their hearts' content. The jovial fiddler and the melancholy banjo player did miracles of music, and quadrille, waltz, schottische and mazourka followed each other in rapid succession. About five P.M. our fair guests left us, well pleased with their visit, and the dashing roadsters of Robert’s line whiled them off merrily on their road home to Dayton.

Whether it was the influence of this delegation of pretty women here which caused it or not we will not say, but one thing is certain, there were two Union primary meetings held in the evening, one of which—the true-blue, unmistakable Union—nominated G. W. Swain for Justice of the Peace, J. Craig for Constable, and S. S. Chinn for Mining Recorder for this District. The other meeting nominated T. W. Penny for Justice, J. White for Constable, and S. Magee for Recorder. A. D. 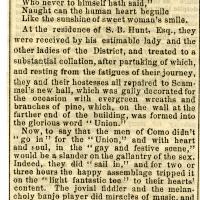