The coldest night thus far this season has chilled the Austin thermometer down to ten degrees above zero. Now, how confoundedly indefinite that sounds -- down to ten degrees above zero. Not more than ninety-nine out of 100 intelligent folks know what zero means, except that it is something colder than freezing, and the hundredth one has an indefinite idea that it is simply a short, handy name for the freezing point. Why couldn't old Farenheit have adjusted his thermometer on this last-mentioned proposition? He is dead, and some friend of his ought now to rise and correct his thermometer. Anyhow, Winter seems to have started in, and snow covers this section of the State, with promising indications of plenty more to come. Serene is he whose home lodgings are inside of a good brick or adobe house. Mud, baked or raw-dried, makes the most comfortable dwelling -- cool in summer and warm in Winter. Austin contains more good, solid little mud houses for her population than any other town in the State, and right about now every one is fully occupied. Rents are high enough and no houses for sale at low figures. This reminds me of a festive little incident in the way of

Last Spring our mutual friend Spykens had a house intrusted to him for sale. It was not a good time of the year for selling houses, but he started in to do the best he could on the proposition. He offered it for one-third of its value, and went after everybody he thought had any spare coin or disposition to buy. After much speculative wear and tear of shoe leather in that respect, he found an eligible and willing customer. But he was in bad luck. When the customer called to take a look at the concern, a mutual lady friend, who lived near by, feeling interested in the matter, called also. They went through the house, and Spykens tried to show and represent things to the best advantage, but found himself most wofully and unexpectedly handicapped by the lady neighbor aforesaid, who would keep chipping in with a fluent string of incidental remarks and observations: "Yes, that' so, Mr. Skerry, this house is in a good location enough, but it's not a new house, by any means. The floors are in a pretty fair condition, but look at the walls and ceilings. It has to be papered throughout."

"Yes," interposed Spykens, "but it wouldn't cost much to do that, and make the house just as good as new."

"I know; but even then it's a cold house for Winter and always was, and just look at the furniture -- all worn out."

"But I'm not trying to sell anything more than the house to Mr. Skerry -- the furniture is not for sale."

"Oh! Well, anyhow, Mr. Skerry, before you conclude this trade, just go and take a look at that little adobe next to our house. I think they'd sell it, and it would be so much better than this."

Spykens smiled very grimly as he showed the party out; trying to remember a few words of the Lord's Prayer. Then he looked in the glass and soliloquizingly consoled himself thusly: "Smile, old son, smile. You used to think yourself some on a horse trade, but how are you on selling houses? As Farmer Treadway would remark: 'This is one time, my son, where you got your fork in where there wasn't any guano.'"

But Spykens, although thus unwittingly handicapped, was not entirely cast down. He felt philosophically amused, as it were, at the style of the incident, and subsequently, when he had not the aforesaid lady neighbor to assist him, succeeded in selling the house to another party.

One of the most prominent objects in the milling or mining line here in Austin, is the queer looking big brick, stone and wooden building at the upper part of town, near the Manhattan mill, popularly known as "the concentrator," or more properly the Boston mill. It is the largest building in town, being sixty or eighty feet wide, 100 feet or so long, and of various hights, with a central cockloft towering above, like a cupola on a country Court-house, a turret on a monitor, or a hump on a camel's back. This milling concern was built in the early days of the Reese River District, by a company of Boston capitalists, who had become the happy owners of the Naiad Queen mine, near by. They had it to work the ores from their mine, and it cost over $100,000. And it was filled with machinery for the concentration and reduction of ores, devised by George Krom, a very ingenious Boston mechanic and inventor. Much of the machinery has been removed, but there is still enough left on the eight floors of the spacious , lofty, building to impress the soul of most anybody with a curious degree of wonderment. Numerous little jigging machines are thickly crowded together, with a wilderness of belt and pulley attachments, and from floor to floor are series of elevators, revolving screens, more machines and things indescribable, little and big. The most practical impression to any practical mind upon square inspection of all this vast amount of concentrating machinery, is that there is too much of it; that the whole concentrating arrangement was too multifarious from the start; that the machinery would bear concentrating to begin with before introducing any ore. Naturally, its career was short. It failed to concentrate, or its measure of success was too costly. Anyhow, the fun didn't pay for the powder -- too much money was spent above ground on this mill for financial success in the mine. The Boston Company got discouraged and the result is that the mill or concentrator is now owned principally or altogether by the Manhattan Company, and the mine is relocated by other parties, as mentioned in my last letter.

There has been but little serious sickness among the Piutes about here of late, but last evening I heard the howling Indian doctor sending forth his intermittent yells from the south hillside, so probably somebody is sick over there. He sings out "Ho, Joe!" after a style that would be at once recognized and approved by any of the Nevada county, Cal., men.

The Manhattan mill will probably shut down and take a rest on the 20th instant. This is in order to make a general cleanup, requisite repairs and allow an accumulation of ore for another good run.

The next grand source of excitement looked forward to is the convening of the Legislature at Carson. Great expectations are indulged in by many. Much good may come out of Nazareth. Anyhow let us hope for the best. 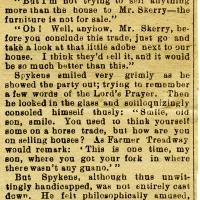