Thanksgiving Day is always well observed in this section, and to-day has been no exception to the rule. Austinites are not famous for attending church any more on this day than on Sunday, but when it comes to eating turkey, plum pudding and all that sort of thing they stand in with the most consistent unanimity. Plenty of nice fat geese, ducks, chickens and other eligible birds came in from the ranches, and those who had more powder and shot than coin had only to step out into the hills or valley half a dozen miles or less in order to shoot a plentiful supply of rabbits, sage-hen and other small game for the Thanksgiving feast. Even the Chinese feastingly observed the day, eating plenty of hog done up in all sorts of Celestial culinary styles, and respectfully refraining from shooting off any fire-crackers. Work was suspended in the mines and mill, the day was fine, much friendly visiting was done and numerous unfortunate bachelors and other single persons who had no invitation to dine elsewhere found plenty of the traditional turkey, chicken pot-pie and similar Thanksgiving outfits at the restaurants. The ball of Lander Post, G.A.R., is progressing to-night at International Hall, as a wind-up to the day's festive observances, and is well and appropriately attended.

In view of the recent most vigorously partisan campaign, it is somewhat amusing to note the perfectly philosophical equanimity with which the result is accepted. There seems to be a sort of settled conviction on the part of Republicans that the country is safe, anyhow, and that the man who was elected President by a 1,147 St. John majority will bear in mind that he literally won by a scratch, and not attempt to run things too exclusively for the benefit of the Democratic party. The Presidents and all precedents of twenty-four years past are all well borne in mind, and the loyal American element which has defended and preserved the integrity of the proud old Republic of the Stars and Stripes still remains just as strong, watchful and determined as ever, tried and true, and regardless of present politically experimental complications. The Republican North and the Solid South must dissolvingly blend, and join hands for mutual interest, and that truly American party which shall best maintain and advance the prosperity and integrity of the grandest, purest and best Republic God's sun ever shone upon, will be the reigning power and loyal safeguard of our country's future.

Perhaps it may be through the chastening influence of adversity, but it is quite noticeable that the men elected to the Legislature throughout the State are among the best that could be selected, and fully up to the average, if not superior, to previous Legislatures. The Democrats certainly are considerably in the minority, yet in view of the great Republican sweep throughout the State in the recent campaign it is all the more complimentary to the few winning democrats, as indicative of their personal ability and popularity. Dennis and Smyth, the two Democratic Senatorial hold-overs from the "Great East," are both gentlemen of acknowledged ability, and the rest of the Senate is composed of good, square, sensible men whom we all know, and can trust to do able and honest duty by the State with credit to themselves and their constituents. We send three first-rate Assemblymen from Lander, and have no reason not to consider the rest to be equally as good, consequently the material interests of the State are not liable to suffer at Carson this Winter.

Last Monday quite a little sensation was created by the arrival and passage through town of a fourteen-mule team with three big wagons -- a leading wagon and two "back-actions." The wagons had lofty sides and high rounded canvass roofs, and two spare animals were hitched on behind with a light saddle horse for riding and herding purposes. There were big barrels lashed to the sides of the wagons for water transportation when crossing desert places, and the whole arrangement reminded one of the huge "prairie schooners," freight and emigrant wagons of the old early times in this State before the Central Pacific Railroad brought longer trains and no greater prosperity. This old time outfit belongs to John Fitzgerald, who was along with it as chief manager and navigator , accompanied by "Belly-Aching Joe" and another man as "helpers," and came from Winnemucca, where Fitzgerald has been engaged in freighting to Silver City and other points in Idaho and vicinity for the past eleven years. Railroads ruining his usefulness and profit, he is now on his way to Arizona, where he will follow freighting or sell out. On board his wagons he had about 11,000 pounds of barley, hay, flour and provisions for the route, going as light as possible, and taking the road easy in order to get his team through in good condition. His usual load, hauling from Winnemucca to Silver City, was 30,000 pounds, with sixteen animals and four wagons, but he left one wagon behind, not caring to take it along to Arizona. He will pass through Belmont and probably shape his course down the Muddy to the Colorado, following that river to the most advantageous turnout into the land of the cactus, the horned toad and the scalp-coveting Apache.

That item about the general crookedness and possible extent of Reese river which recently appeared in the Reveille and has been so extensively copied of late, is very correct. The river averages from two to several feet in width, runs across the valley continually from side to side, and irrigates more good land than any other stream of its size in the world. It is so crooked that no fish but an eel can swim up or down it with any sort of comfort, yet it is a very serviceable river. Congressman Cassidy's ungrateful slur about there not being any rivers in Nevada was out of place and uncalled for, and it is hard to say how much that may have influenced his defeat. Had he gone in for boring artesian wells to increase its water supply and its navigation and fish propagation facilities, he might have made a better mark in the sagebrush world and been sent back to where, in his place, the Woodburn twineth, or will soon twine.

Frank Jaynes, of the Western Union Telegraph Company, was here a day or two since, arranging matters connected therewith, and F.W. Dunn, Superintendent of the Nevada Central Railway, who was recently taken home East to die, also came in very unexpectedly on a business visit. Frank Jaynes' scalp looks older than Sharon's and Dunn is evidently not "done gone" yet. Our "roseate sunsets" still hold out, and as long as the supply of volcanic eruption dust from Japan and Vesuvius holds out in atmospheric suspension they may be indefinitely continued.

George Henning, Grand Patriarch of the Odd Fellows in this State, in company with Grand Master J.T. Williams, were in Austin Tuesday. They have been visiting the various Lodges in the State, and report things prosperous in the Order.

Republicans here as well as elsewhere want to know what right our National Committee had to humbug Republicans throughout the country by sending forth that telegram to the effect that Blaine was elected, when they didn't know any more about it than a Democratic yellow dog. Such nonsense makes people lose both money and confidence. 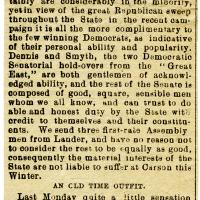