The brilliant example set by the Democracy of the East and elsewhere, celebrating the grand success of Cleveland and Hendricks, fired up the emulative ambition of the Democrats of Austin to go and do likewise, so last Monday evening they celebrated in very good style, with the material assistance of their Republican brethren. They borrowed the Republican torches, cannon, cars, etc., and sailed in for a good time. Democratic places of business and residences had their windows illuminated with candles, and long rows of Chinese lanterns adorned the porches, while flags, little and big, fluttered everywhere, reminding one of old times in Gold Hill and Virginia. Bonfires blazed along Main street, and a big pile of sagebrush burning on the hillside south of town was much enjoyed by a large assemblage of Piute squaws, bucks and papooses, who huddled around it. The spunky little Republican cannon belched forth saltpetered thunder from its brazen throat, and the National Guard band of fourteen pieces -- all Republican – did up the music in fine style. About 7 o'clock hostilities commenced by the formation of the grand torchlight procession, and marched up town, the band, in full uniform, playing Dixie. Behind the band came quite a number of men carrying torches and transparencies, and escorting a crowd of small boys representing the young Democracy of the Toiyabe range, hurrahing for Cleveland and Hendricks as often as their small piping voices would allow.

They marched gallantly up Main street to Upper Austin and the Manhattan mill. There they boarded a train of flat cars, with more Democrats and Republicans, and the mill whistle loudly tooted as they went rolling carefully along down through town. There was much hurrahing, and the band played "Dixie" in a most inspiring manner. Why is it that this peculiar old negro minstrel ditty, adopted as the war tune of the Southern Confederacy, is the only tune considered sufficiently expressive of Democratic patriotism on this festive occasions? Perhaps it is in favored recognition of the Solid South as the true backing of the Democracy, yet one of the transparencies bore the legendary inscription of "We know of no North, no South, no East, no West." Another transparency asked "What's the Matter with Cleveland and New York?" -- a very pertinent and knotty conundrum, rather troublesome to solve. Still another transparency bore the perhaps prophetic motto: "Blaine and Logan the Coming Men."

The train of flats came to a halt in front of the International, and when the band rested from playing Dixie, Hon. H. T. Creswell being loudly called for, appeared on the balcony. A guard of honor stood on each side of him, holding a fancy canopy of flags and things over his head, like the representation of Joss in a Chinese temple, giving fine effect to his ponderously prophetic words. Said He: Our Republican adversaries tell us that we are a little too hasty and previous in thus celebrating the election of Cleveland and Hendricks, our proud Democratic standard bearers as President and Vice President of these United States, but I have investigated the matter and do not think so. After twenty-four years of starvation on the outside of the public crib, is it any wonder that we embrace the earliest moment to celebrate our hard-won success? No, we are not too fast. Cleveland and Hendricks are elected, and I predict that they will be inaugurated on the fourth of next March, and there will b a good and prosperous administration. Good night." Prolonged cheers and applause rewarded him, and after some more Dixie by the band James Egan, a rising young Democrat with no small degree of oratorical talent and general ability, was called forth beneath the pagoda. He said: "There is a great cry throughout the land for Cleveland and Hendricks. The whole nation joins in a grand hallelujah for Cleveland and Hendricks, and it is no wonder that the Democrats should, on this proud occasion, give a jubilee of praise to the God who made them. Republicanism is a thing of the past, as is also the political career of James G. Blaine." Then he recited a very clever parody on the "Burial of Sir John Moore," and retired amid the hilarious plaudits of his audience. Both Creswell and Egan got off many other good things and were bountifully applauded throughout. The band having performed their contract for the evening, marched off up street playing Hail Columbia and every patriotic piece they could think of to disinfect their horns of Dixie, washed out their mouths with lager, and the evening's jubilee came naturally to an end. The Democracy, however, threaten to give us a second jubilation Saturday evening if Cleveland is not counted out by that time.

The most outspoken, disloyal American in Austin is a colored man, or, as he claims, a "nigger." He says openly that he is a secessionist, that the South was right in every respect, and that he is just as much of a rebel as Jeff Davis or any other man of the Southern Confederacy ever was. When one considers that the terrible civil war between the North and the South was solely in behalf of the colored race, it is hard to realize that one of that race can give utterance to such ungrateful sentiments, and honest human charity can only suggest that he is not of sound mind. The other evening our friend Baudle, who is of a moralizing disposition and somewhat peculiar in his expressions, after hearing the aforesaid colored man express himself, waxed indignant and relieved his mind as follows: "I can hardly believe that I hear my ears aright. Was it for such monstrosities as him that we all fought, bled and died among the malarious everglades of the Chickahominy and on the seething ramparts of Lookout Mountain? Send him to the sugar-cane morasses of the South, where he belongs, here to work' neath the broiling rays of the refulgent sun and the resounding blows of the slave-drivers' whip. He ignores not a damn who made him free, and deserves not the orgies of American liberty. Yet this colored man is educated and intelligent. Education is the foundation of all human liberty, but in his case language is inadequate to express my indignation at a damn fool negro who thus outrages and nullifies his own procreation in the eyes of all true Americans. Words totally fail."

Already we hear the note of preparation throughout the land of the Democracy preparing to make a general raid after all the Federal offices, from Superintendent to internal revenue bung-starter, all in gleeful anticipation of the change to a Democratic Administration. Even in Austin half a dozen good old Democrats have already put in their applications for the appointment of Postmaster. And in anticipation of a change, anyhow, even if Cleveland did not win, one enterprising Republican wrote to Blaine about it some weeks before the election. A righteous Congress, whether Democratic or Republican, should as soon as possible pass a civil service reform bill, placing all such offices beyond the baleful influence of political changes. A faithful public servant in that line should be retained so long as he fills his position in a perfectly satisfactory manner, and no such true and faithful servant should ever be subjected to fear of losing his position through any possible change in political administration. None should ever be discharged, except for just cause, and not for politics.

What do our temperance friends think now of the politico-prohibition gospel according to St. John? How do they admire the result? Do they prefer Cleveland and undoubted Democratic enmity to their cause to Blaine and equitable Republican rule, with possible chances in their favor? In jumping out of the frying-pan into the fire, how do they like the fire as a matter of cool preference? It is a clear case but for St. John the Republican party would have won in New York and the nation. St. John is the male Delilah who has betrayed the proud Republican giant Samson into the hands of the Philistines. The Democrats never fool with such cold water side issues. They always take their whisky straight, and vote as they drink -- straight. Vale, St. John. Don't burn him in effigy, same as they have done in Kansas, but put a string around his neck, with a big stone to it, and drown him in a pond of cold water. He is a sick kitten.

Ben Butler should be bottled and kept corked up forever, except as a Democratic candidate for the Presidency. He would make an excellent Democratic President -- with a Republican Congress.

A man who has only been in Austin three or four years -- only since the flood -- aspired to office at the recent election, but was snubbed by the ruling antediluvians on the ground that, although he was sufficiently able and popular, he had not been here long enough. Yet certain able antediluvians, who got away with nominations for office, got badly beaten in the election. "What's the matter now?"

We pay out money freely for the benefit of foreign missions, and to support ministers abroad, yet starve our own hardworking local home preachers -- not in Austin, but elsewhere.

Several pretty lively fights have occurred as a punctuating wind-up of the election, so to speak, and now Austin has settled down to her bed-rock equanimity for the next two years, or until next election. ALF. DOTEN. 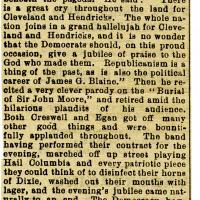