Again were the patriotic echoes of the old Toiyabe range awakened on Monday evening last by a grand Republican demonstration, similar to that of the Saturday evening previous in honor of Senator Jones. This time it was Hon. William Woodburn, about to be re-elected to Congress from Nevada in place of Cassidy, who was the proud recipient of festive Austin honors and hospitalities. About 7 P.M. the torchlight procession and brass band, on a long train of flat-cars, handled by the street locomotive, Mule's Relief, moved slowly down the street, the numerous torches, huge flaming beacons and lettered transparencies giving it the appearance of an extensive load of seething fire. The cheers of the procession were heartily responded to by the crowds densely lining the sidewalks, and the martial music was rythmetically punctuated, as it were, by the frequent fierce reports of the loudmouthed little brass cannon on the street, near the lofty blazing bonfire. Woodburn had arrived on the train of the previous evening, visited the mines and mill in the forenoon, shook hands with most of the population, including numerous friends and old acquaintances, and was feeling first-rate. He appreciated the novel style of his reception and genuine heartiness very much. International Hall was densely crowded, the front seats being filled with ladies, and the brass band imparted the influence of choice, inspiring music. Chairman Andrew Nicholls, of the County Central Committee, introduced Mr. Woodburn to the audience, and he was received with demonstrative approval. He spoke fully two hours, and his attentive audience frequently interrupted him with appreciative applause. He was placed somewhat at a disadvantage by Jones having preceded him so recently, covering many points of his discourse. Moreover, his subject matter was largely made up of replies to Cassidy's bold, recklessly mendacious assertions, which must not be allowed to go unrefuted or unexposed, and which constitutes no small or easy task. The following is merely a brief sketch or summary of

Referring to Cassidy's bold claim to having not only his own party's vote, but also many Republican votes, he said: "I feel a little more modest, and shall only ask for the votes of the Republicans. So, too, as he claims to show up advantageously the Democratic side of this great political argument, I will show up t he Republican side. I also propose to show him up, tell my own story and let the people judge between us. He cites the McSweeney case, to show that our Republican Administration does not protect the rights of adopted or naturalized citizens, yet the record shows that McSweeney had renounced his American citizenship, returned to Ireland, became again an English subject, and was holding as office as such; therefore, was not entitled to any protection or influence on our part. The Kostza case was very different. Austrian officers attempted to kidnap him, in Smyrna, a neutral Turkish port, claiming him as an Austrian and liable to military duty. He called for protection as an American citizen, and Captain Ingraham promptly opened the ports of his war ship and compelled them to release their prisoner and took him under the protection of the stars and stripes. And it was James G. Blaine who called special attention of Congress to this matter, and caused an Act to be passed declaring that a certificate of American naturalization must be properly respected by all nations. Granting to foreigners, whether naturalized or not, who served in our army, 160 acres of land, the Homestead law, the Eight-hour law were all Republican, and not Democratic measures. Cassidy, with the most willful persistency, still states that the Democratic party has never given away one inch of the public domain to aid in building railroads and canals, when the official records show that during the ten years from 1850 to 1860 the Democratic administration did give away no less that 33,680,000 acres for that very purpose. He tries to blame the Republican party for only acquiring Alaska, and not Louisiana, which was acquired many years before the Republican party or even Cassidy was born. No Democrat has ever originated a law to exclude or restrict Chinese immigration. Cassidy ungenerously gives no credit whatever to Senator Jones on the silver question, but to Bland, who had no more to do with its origin than the man in the moon. Yet everybody knows Jones originated, promoted and engineered the Silver bill to final success, remonetizing silver and restoring to it its value and usefulness as a legal coin of the Nation. Dick Bland lived on the Comstock in 1866 and had his headquarters in Judge Pitzer's office. He had leanings toward law, and the height of his ambition was to run for Justice of the Peace. He got defeated, subsided and finally disappeared. He subsequently turned up in Congress, and was put on the Committee on Mines and Mining, being probably considered as a Comstock "expert." Banks drew up a Silver bill by way of experiment, and it was referred to the Mines and Mining Committee, who approved it, and Bland had the honor of lying it on the Clerk's desk. This gave it his name, and made him unexpectedly famous. It has kept him in Congress ever since, and it is a wonder that it has not elevated him to the Presidential chair. James G. Blaine was a friend of our silver and did all he could for us, as he also did in the Chinese restriction matter. Cassidy's tariff ideas are too limited and muddled for all practical purposes, -- uncertain and shaky as the tariff plank in the Democratic platform. Cleveland is the representative of free trade, and all the free traders in the country have arrayed themselves under his banner. Cassidy says a County Commissioner is good enough for a President. I don't mind his applying that proposition to his candidate, but not to ours. He also declares that there is too much corruption in Government affairs, anyhow, and thinks a change would be beneficial. I , too, want a change. I want Cassidy put out, and myself put in his place. He says we have no navy, yet what has our Democratic Congress done toward providing one. He claims to have secured the passage of an appropriation of $25,000 for the improvement of the Colorado river, yet it will be borne in mind that when the bill was being considered, Cassidy deliberately rose and said Nevada needed no such appropriation, for she had no river bigger than the stream flowing from the Sutro tunnel. He claims that his bill for $200,000, in liquidation of the Indian war debt passed, but the record shows that it did not. He got $12,000 appropriated for the removal of the remains of deceased soldiers from Fort Churchill, and has distributed barrels of seeds and bushels of documents throughout the State, yet he should not claim credit for doing the simple duty that he was elected, sent there and paid for doing. The Desert Land bill did not originate with Cassidy, but with Uncle Johnny Boland, down at Rye Patch. The meeting adjourned with cheers for Blaine and Logan, and for Woodburn. He left for Belmont next morning, addressed a large and enthusiastic audience there Wednesday evening, returned yesterday to Austin and left again this morning, to speak in Reno to-morrow evening. Woodburn is doing some very arduous and effective work in the good cause, and he will deserve his reward at the polls a week from next Tuesday. Cassidy, the man of bold, reckless assertions, should be glad of a chance to rest and recuperate his conscience.

Among the numerous campaign documents distributed by the Democracy is a map showing the public lands that have been given away in aid of the construction of railroads and canals throughout the United States. The Democracy desires to thus show up Republican extravagance and venal wastefulness in that respect, totally ignoring the fact that this policy was commenced very liberally under Democratic rule and administration. And yet where is the detriment or loss in so doing? Is it not good policy? Has it not proven to be so? Building railroads through any country and any lands -- good, bad or indifferent -- infallibly increases the value of such lands, or gives a tangible value they never possessed before. Millions of acres given to the Central Pacific Railroad were totally and absolutely valueless until the road was built across the continent. Now the alternate sections reserved by Government are worth ten times more than all the sections ever were before. "Half a loaf is much better than no bread." The broad dark streaks on that map merely show improvement and prosperity, and form a most excellent argument in favor of Republican rule and progress. Even owners of valuable town sites or lots find it good paying policy to give away numerous lots to persons who will build upon and make substantial improvements, thereby far more than doubling the value of the rest of the property.

The recent visit of Senator Jones to Eastern Nevada was like a broad ray of warm sunshine beaming diagonally across the political horizon. He had a jolly smile for all, and all hands willingly smiled with him, regardless of political complexion. The Eureka folks declare that he is the best speaker, giving the best political address ever heard in that furnace-fumed burg. The Austin people all swear by Jones, and the old pioneers unhesitatingly declare that nothing like him has been here before or since the flood. They consider him a walking text book on tariff, currency or anything else in that line -- a single standard of forensic eloquence, by which all other speakers have to be comparatively judged and valued hereafter. It will be "Yes, he's a mighty good talker, but you oughter heerd Jones." Those who couldn't squeeze into the hall or get far enough up the stairway to hear his voice are regarded as unfortunate. Colonel A.C. Ellis, of Carson, is to be here next Monday evening and talk Democracy. Even now many are asking what sort of a talker he is as compared with Jones. If he falls too far below the standard he will be mobbed.

Strong delegations of candidates from both parties have gone down to Battle Mountain and the north end of the county electioneering. One stands the other off in the way of securing votes or influence, and the friendly voter smileth with either party when called upon.

Jones found one freshly-naturalized citizen here named John P. Jones, just like himself. He also found about forty other Jones's, all good men, and all Republicans.

The Salt River boat is being got ready for passengers, and the coon-dog ball on November 5 is sure to be the grandest success of the season. Many an anxious candidate is in a state of trepidation lest he should be proved to be a coon-dog. Some are already picked out as such.

The other evening "Red Jimmy" Williams, speaking politically, cocked his head over one side, as he sagaciously remarked, "It's my opinion, old son, that the Democratic party's workin' on tribute, and they's got a dam pad pitch." 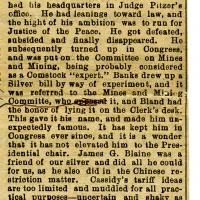