August being put down as the regular cloudburst month, and no such sensational episode having thus far occurred, the old pioneers are declaring it "off" for the season; therefore the next thing in order is the Republican primary election next Saturday for delegates to Carson on the 4th of next month. Everybody does not care to go, there not being much in it, so to speak, so a Dutchman, a Cornishman and an American are decided upon to represent Austin, at least that's the way it is told to me by a political insider. It is to be hoped that all three will go, but the chances are that only one will go. Being an emigrant here, comparatively speaking, I am even more bashful politically than I used to be on the Comstock; but I humbly hope that if only one goes, it will be Cousin Jack, with the proxies of the other two in his pocket.

One of the queerest of political anomalies consists in the fact that if a good, square English-American Cousin Jack is nominated for office, let him be ever so capable, he is almost sure to be beaten, and by his own nationality. Is it envious jealousy or what is it that induces this? We all know such to be the fact, however. Native Americans and other nationalities vote for him, but he cannot depend upon his own countrymen to squarely back him, as they naturally should. On the contrary, they just coolly repudiate him. "Its wonderful how they do it, but they do." And they know they do.

It seems natural that lawyers should dabble in politics. They always have and they always do. We have only two lawyers in Austin, and one of them has been honorably prominent in the political affairs of this county and State, while the other has been honorably obscure in that respect, yet none the less effective in his quiet way. By the way, according to the Annual Statistician, which is acknowledged standard authority in all matters of statistical or chronological record, out of the fifty-six signers of the Declaration of Independence, twenty-five were lawyers. The rest were nine merchants, three statesmen, eight farmers, five doctors, and a printer General, foundrymen, educator, surveyor, soldier, sailor and a shoemaker.

Well, the way filthy, nasty mud is being politically thrown by the newspapers upon Cleveland and Blaine is really discouraging to all decent aspirants for public office. It is a clear case that both should have been hanged years ago or be in the Penitentiary for life. They said the same about Grant, all three being accused of being good men among women. Meanwhile Ben. Butler's familiar cock-eyed old physiog bobs up serenely above the malarious pool, smiling at the idea that the worst that can be said of him is that he stole what spoons he could find in New Orleans. Yet it is perfectly regular and appropriate in all well-ordered old nobility families that the butler should take charge of the spoons. And they were all silver spoons, too, which circumstance indicates that Butler will stand in well for our silver interests, in case he should be elected President, perhaps only second to our worthy Senator Jones. Ah, well, this nasty mud-throwing business will soon play itself out, and after the State Convention at Carson the Republican campaign game may be considered made up, so far as leading State officers are concerned, and good, square standing in for county and legislative officers also will be in order.

The other night a woman who formerly lived on the Comstock came up on the train after a little girl nine or ten years of age, which she said belonged to her. She was divorced some years ago, and the father of the child has supported it ever since, giving to the charge of his brother here in Austin, who, with his wife , became very much attached to it. The woman came with an indefinite idea of kidnapping or obtaining possession of the little one by force of arms or something, and going directly to the home of her guardian, she raised merry Gehenna and the whole neighborhood, until gathered in by our faithful Chief of Police, Joe King, and taken to the hotel. By the morning train the little one, in charge of her aunt, departed for Colorado, where her father resides with another wife and children in comfortable circumstances. When this unruly woman found next day that her game had slipped her she became much exasperated, and consulted legal and constabulary authority on the subject, but was advised that she could do nothing. By this time the little girl is happy with her loving father and out of the reach of her unnatural mother. This woman stayed here, conducting herself rather loosely, to say the least, and left for somewhere this morning. Strange to say, she had a pass from a high railroad officer in San Francisco over the Central and Union Pacific roads, and even side lines, telling everybody to give her any reasonable assistance in any respect that she should desire to ask for, and send the bill to him. She is a very pretty little woman, formerly well known at the south end of your city, and at least one of her deserted husbands will recognize her identity on reading this brief sketch.

"Christian Joe," a tall, handsome Piute, had a little trouble yesterday on the sidewalk with his buxom wife. It was apparently a fit of jealousy on her part, but the paroxysm was violent while it lasted. She made a vicious scratch or dig at his eyes, but he was too tall, so she tried to choke him to death with his neck rag, but it came off. Then she destroyed his linen duster and went for his boiled shirt, but he succeeded in twisting away and ran off up the street. She followed, and when she picked up his hat she tore it into four quarters. The last seen of her she was on his trail with tomahawk vengeance in her eye.

Austin is apparently as prosperous as ever at the present time. tlint has just completed and moved into his new fire-proof furniture SDre, other substantial improvements are visible, and people generally seem satisfied to get along do the best they can. The mines are doing well, and the bullion output is very satisfactory, tangible and convincing. 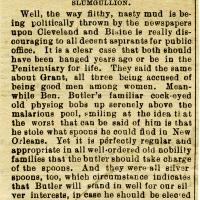