To-morrow will be the anniversary of the fearful cloudburst and flood which so sweepingly devastated Austin in 1878. It occurred at 4 o'clock P.M. A huge, black and soggy old water-logged cloud harikaried itself upon the extensive water shed at the head of Pony Canyon, and the water it shed very suddenly and unexpectedly came rolling and tumbling in huge, tempestuous volume down Main street. Awnings, sidewalks and even some buildings were swept away by the appalling flood and disappeared down the canyon, a man and a mule constituting the list of victims, although there were many narrow escapes from death or serious injury. Now, for about a week, great, black clouds have ominously hovered and portentously thundered around and along the Toiyabe range, and each day the old Reese River pioneer has sagaciously nodded his bald pate toward the threatening heavens as he hopefully predicted the coming cloudburst. Hopefully, for there is not one of these truthful old sinners but would glory in seeing a repetition of the direful calamity they have so eloquently and exaggeratingly bragged about to all recent comers. Not that they would desire any serious damage to be done, but merely as a matter of historical and personal vindication.

The grand palpitating sensation of the season yesterday came and went. It came like one of those old-time cloudbursts, and its effects were somewhat similar. All day a lively flood, both human and financial, poured down the canyon to the circus ground. Everybody went -- Piutes, Chinese and all -- and the whole surrounding country for dozens of miles was numerously represented. There must have been about 1,500 people present at each performance -- afternoon and evening -- and each and all of the 1,500 consider themselves more or less humbugged and swindled. Oh for a circus or a menagerie that would come even half up to its billed promises. Oh for an impossibility. To-day the truthful old Reese River pioneer gazes despondently at the gay pictured misrepresentations of Cole's show, beautifully and plentifully adorning the entire town, and cheerfully pronounces it the best billed and the biggest bilk of anything since the flood. But Austin is ninety-three miles from the main overland railroad, and the transportation facilities of our local narrow gauge road are, of course, somewhat limited, and too much of a good thing should not be expected; therefore, only thirty-one carloads came, leaving the white elephant, the big elephant, the human fly and other heavy furniture at Battle Mountain. Yet the menagerie department was the best, for the circus was nothing new, and not up to the old regulation style. It had one too many rings, for none but a two-faced or cross-eyed man can satisfactorily watch two ring performances at one and the same time. It was the first circus I ever saw having no lady rider and no clown. Just imagine a circus without a clown -- the play of Hamlet with Hamlet left out. The performing "Arabs" were hard-looking sons of the desert, and probably good at "folding the tents and silently stealing away," for they didn't show themselves very good at much of anything else. "Blessed are those who expect nothing, for they shall not be disappointed;" therefore, nobody here feels very sad over this festive episode, although "Old King Cole, the merry old soul," and his"fiddlers three," left at midnight, carrying away all the loose coin in the Reese River section.

The hay crop throughout this section turns out good, and about up to the average, yet on many of the submerged meadows along the river the grass is unusually short, hardly paying to cut for hay. Speaking of this, Sam Fuller, a Reese River pioneer, tells an affecting tale about Somerset county, Maine, where he was born and brought up. It is a very rocky country, therefore sheep have to skirmish around lively to get a living. Sam frequently saw an old sheep lower her lamb by the tail over the edge of a rocky bluff, to pick the grass out of the crevices, the dear little creature filling its mouth and then coming up to divide with its mother. Thousands of sheep got their living and grew fat by this simple, yet very ingenious device. Sam is a democrat, and emigrated to this section a good many years ago, long before the Mormons did. He remembers Gold Hill when its peak was over 300 feet higher than Mount Davidson.

This has been an extraordinary season for flowers, and everywhere on the hills as well as in the valleys many very beautiful varieties are to be found blooming amid the sagebrush. If Professor Lemmon, the botanic Vennor of the Pacific Coast, were here he would doubtless discover many new descriptions of flowers unknown to science. One very rare species of thornless cactus, owing to its peculiar shape and color, I have already named Cactii Limmonii, and then there is a pretty little yellow tulip with a sort of pouch on each leaf, a derringer pocket, as it were, in which it carries its pistils.

The ravages of the pestiferous army worm have ceased, and door-yard and kitchen-garden agriculture flourishes anew. County Assessor McCafferty saved up his whisky bottles till he got enough to make a nice border around his lettuce patch. The worms devoured all the lettuce and attacked the bottles, but soon got discouraged, or drunk, and died, or evacuated the premises. When they were eating the lettuce he tried to kill them with a copious supply of salt and ground pepper, but they liked the seasoning and called for vinegar and salad oil.

Speaking of this article, our mutual friend Spykens, who is fond of it, discovered that it made his steak gritty, so he proceeded to assay it. The label on the canister said it was standard ground pepper, and the result proved its correctness -- plenty of "ground" in it. He poured a half-pound can of it into a pan of water, stirred and settled it well, washing off the lighter portion, after the style of an old miner panning out gold. When the black pepper was washed off a stratum of white corn meal was reveled, which, on being washed off, left a spoonfull of sand in the bottom of the pan. Any one can easily assay ground pepper in this simple way and prove its correctness. Persons with weak stomachs should grind their own pepper.

All day to-day a Piute squaw at the little Indian village on the hillside south of town has kept up a loud and dismal howling. Her husband died last night, and her grief was as sincere and demonstrative as could be desired. This made the third fatal case for the latest medicine man, and his constituency would have made his own case very fatal if they could have found him. He knew that the established disposal of the profession called for his killing, and he didn't care to wait till the boys called on him, so in the darkness of midnight, about the time the circus pulled up stakes, he waited not to fold his tent, but "silently stole away." Perhaps he has joined the troupe of performing Arabs. Anyhow, his late neighbors and friends will not enjoy the pleasure of stoning him to death -- rocking him to sleep -- as they kindly did to his predecessor, and a good opening is left for another medicine man.

Political wire laying is now in order, also the making of slates. Would-be county officers are plenty, notwithstanding the prospective change from the salary to the fee system. The movements of some of the aspirants, both municipal and legislative, are quite interesting, and may be considered worthy of future mention.

A rancher from Smoky Valley got very much in love with the seven longhaired sisters in the side show of the circus, and wanted to marry them all. He was willing to embrace Mormonism for their sake. 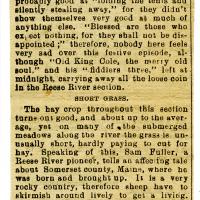